For the second time in a matter of months, users of 4chan's /b/ have vandalize the memorial page of a bullying victim.

For 4chan, trolling doesn’t end at the grave.

Users of the notorious imageboard have taken over the Google+ profile of a dead teen who was a bullying victim, covering it with insults and profanity.

The profile page belonged to 15-year-old Bartlomiej “Bart” Palosz, who fatally shot himself with his family’s shotgun on Aug. 27. According to the Stamford Advocate, Palosz was bullied on Facebook, had his Android phone smashed on the floor, was pushed down some stairs at Connecticut’s Greenwich High School, and regularly insulted for his Polish accent.

Palosz’s sister Beata believed her leaving for college affected him negatively. The two often ate lunch together at school.

“To be honest, I think he was a little afraid that he was not going to have me there anymore,” Beata told the Advocate.  “We were pretty close, but either way he never told me much.”

Palosz was very involved on Google+. He discussed anime, posted personal photos, and shared his own struggles. In hindsight, it’s painful to read.

“Hey if I were to stab my eye out due to school caused insanity, who would miss me?,” he wrote on July 3.

“[D]oes anyone know if you can light a 12 gauge shotgun shell(slug not pellets) with a lighter?” he asked on July 10.

Palosz’s suicide was the subject of a 66-page long thread on /b/, 4chan’s home to all things random, obscene, and horrible, on Tuesday night.

“Anyone who commits suicide deserved to be bullied,” one user wrote. “Never have i came across anyone who was being bullied for ‘no reason.’ Honestly if you can’t man the fuck up to being made fun of for decisions that YOU made then you shouldn’t continue on in life.”

This hatred spilled over to Palosz’s Google+ profile, where /b/ raided his posts with the following messages. (Warning:  The posts contain obscene language and are likely not safe for work.) 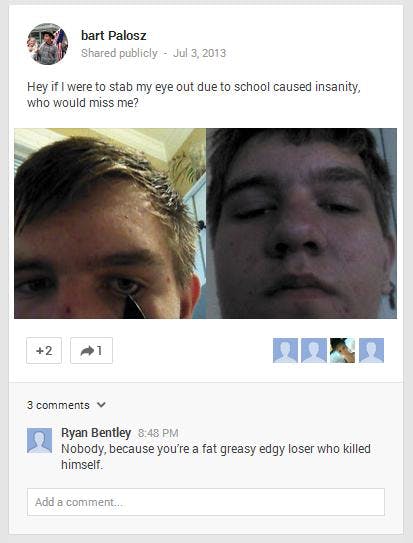 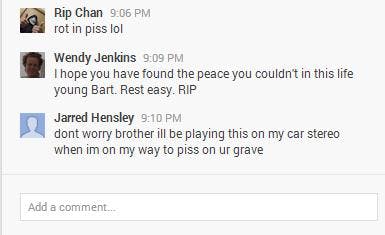 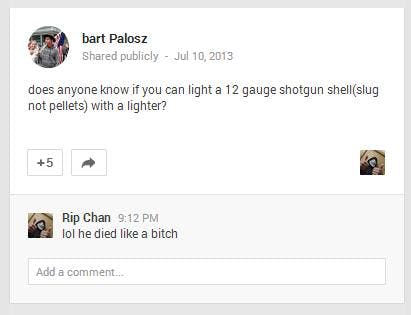 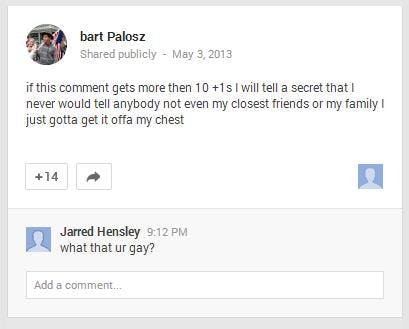 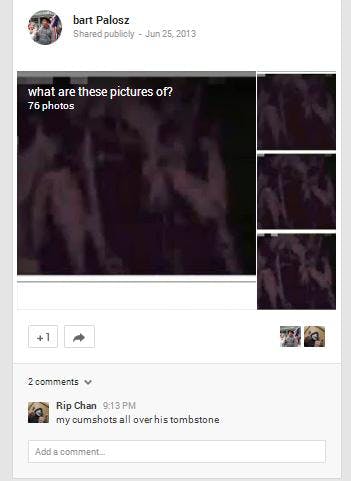 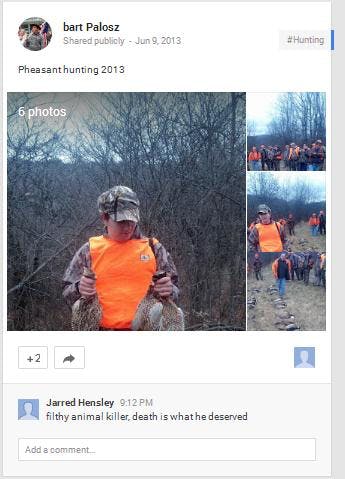 Palosz’s death comes just a month after 14-year-old Hannah Smith was found dead in her home. For weeks, the teen had been bullied on the question-and-answer site Ask.fm. She tried defending herself against the anonymous users encouraging her to kill herself and, in a morbid reference to Amanda Todd’s well-publicized 2012 suicide attempt, to “drink bleach.”

Following Smith’s death, /b/ flooded her Facebook remembrance page with comments calling her a “whore” and “bitch.”

Palosz’s Google+ page is still up. A friend of his named Tash D. has begun reporting /b/’s comments and responding to the trolls directly.

“Leave this kid alone,” Tash wrote, in part, in one emotional post. “HAVE SOME RESPECT?.”