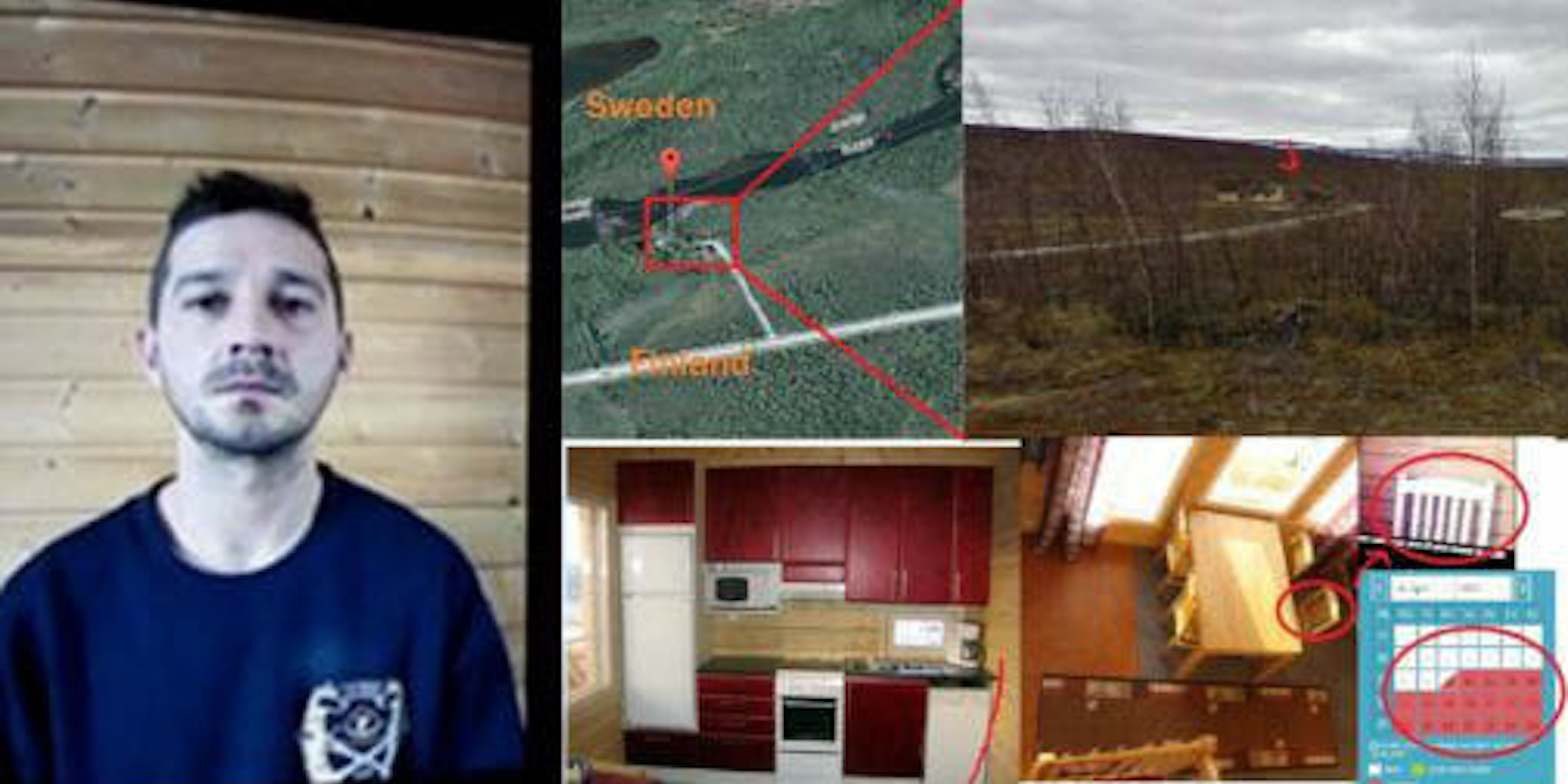 4chan has caught him four times before. Can they do it again?

Performance artist Shia LaBeouf has been attempting, since the election of Donald Trump, to conduct various livestreamed art installations. He began with “He Will Not Divide Us,” a response to the Trump presidency, but it was broken up by white supremacists and trolls. Ever since, his detractors on 4chan and 8chan have been tracking him down in whatever secret location he chooses—and now they’re coming for him in a remote cabin in Finland.

On Wednesday, LaBeouf and his collaborators Nastja Säde Rönkkö and Luke Turner began a month where each will live in a separate cabin somewhere in Lapland. Their only contact with others will be a livestream broadcast. The project is called #Alonetogether, and a group of channers is determined to disrupt it the same way they disrupted LaBeouf in the past. They’ve even given their mission a name: Operation Cabin Fever.

To find LaBeouf previously in Tennessee, they cross-checked air traffic patterns with the planes they saw flying overhead on his livestream, and even claimed to use the positions of the stars. It took less than a day to find him and tear down his “He will not divide us” flag. LaBeouf’s Lapland cabin offers no such environmental evidence, so they’re starting with the specific wood grain of its interior walls.

According to William Hicks of conservative blog Heat Street, there’s a chance they may already have found LaBeouf’s cabin by comparing the furniture to photos of various Lapland rental cabins that appear to be booked for the duration of #AloneTogether.

If it does turn out to be the cabin, there’s some debate about what the trolls will do once they get there. One very mature option: pooping down the chimney to force Shia out of there.

Meanwhile, Heat Street reported, security has been increased at the museum where the livestream is being shown, after trolls in Make American Great Again hats started acting up on camera.

LaBeouf appeared to acknowledge 4chan’s /pol/ in a rant delivered on the livestream via typed messages, the only way he’s communicating with viewers right now.

“The inside story on you young fascists,” he began, “is a lot of you ended up in shock humor/lonely dude forums that nazi recruiters joined.”

He continued with a detailed history of how 4chan’s white supremacist-leaning political forum /pol/, developed out of “teenage beefs” about “nerdy hobbies and resentment” on 4chan’s other boards, and how internet culture was ultimately weaponized by fascists and other unsavory characters.

This rant, 4chan quickly noticed, seems to be directly plagiarized from popular Twitter user and furry historian Colin Spacetwinks, who posted it back in February.

"how did they end up nazis?" a bunch of real nazis whispered poison in their ears while becoming their only community, their only "friends"

LaBeouf is, of course, a notorious plagiarist who has borrowed from comics artist Daniel Clowes, an Esquire article, Charles Bukowski, and others. He’s even plagiarized an apology for plagiarism. The whole thing seems to have been some kind of intentional meta-commentary on the nature of art and creativity, or something. Shia’s 2014 copying spree ended with a stunt where he put a paper bag over his head and declared he was no longer famous. Using Spacetwinks’ astute commentary to respond to trolls falls right in line with LaBeouf’s previous work and also shows that he’s been reading up in an attempt to understand his enemy.

For 4chan, though, it showed something else: Despite his claims of isolation, LaBeouf may have internet access in the cabin. It’s possible he printed out the Spacetwinks thread and brought it with him, but some suspect him of being able to read Twitter even in his supposed solitude.

This image, collected by Know Your Meme, sums up the allegations, although calling it “proof” goes a little too far.

Will Shia finally be able to evade 4chan this time and finish his entire month of isolated livestreaming? The question might be moot at this point: They’re not at his cabin yet, but they’ve already gotten inside his head.