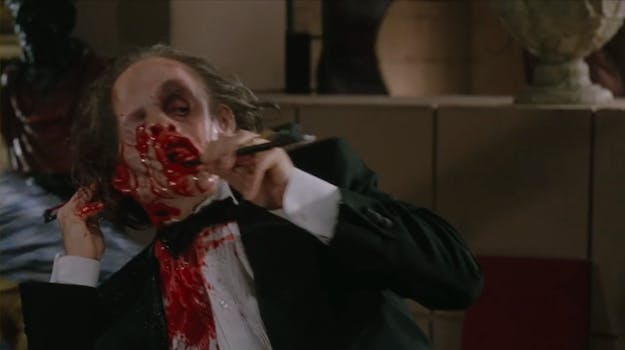 31 days of Halloween movies to binge this October: Week 2

Welcome to week 2 of the Daily Dot’s 31 days of streaming Halloween. If you missed last week’s movies, there’s still time to catch up. But there’s no wrong time to start your personal streaming Halloween movie marathon. This week we’re bringing you unsung classics, hidden gems, new school favorites, one camp masterpiece, and a gorehound’s delight. Lets get streaming.

If Dark Night of the Scarecrow recieved a theatrical release it would remembered as more than just a cult favorite. Originally airing as the CBS Sunday Movie in 1981, Dark Night of the Scarecrow traumatized a generation of families with its ghostly tale of revenge. After a young girl is mauled by a dog, a local mob blames Bubba Ritter, a big yet gentle man with developmental disabilities. A mob forms to hunt Bubba down, ending in his tragic death. But Bubba isn’t content to stay in the grave. Not when there is vengeance to be had. It’s almost entirely gore free, yet dripping with dread. Dark Night of the Scarecrow is a PG-rated horror film that will charm even hardened horror hounds.

Thank god for movies about killer robots. Chopping Mall is a masterpiece of ’80s schlock, parodying the era’s consumer culture while serving up over the top sci-fi horror. The future of mall security has arrived in the form of killbots with tasers and tranquilizer guns. That’s terrible news for a group of teenagers who have decided to throw a secret overnight party in the mall. Packed with humor, excellent practical effects, and a cheesy ’80s score, Chopping Mall is the perfect horror movie to throw on when you’re drinking with friends.

If you make time for just one movie on this list, make it The Monster. On paper, this is a simple film about a mother and her daughter lost in the woods with a terrifying creature threatening their lives. Instead, writer/director Bryan Bertino (The Strangers) uses a familiar set up to explore the fears of a child raised by a selfish parent. The Monster is a creature feature at heart, but its emotional depth adds to its already crushing intensity. If this movie didn’t have a monster in it Zoe Kazan (The Big Sick) would have won awards. There are more horrors in the world than what’s in the woods. Make sure your streaming Halloween marathon explores them all with The Monster.

Famed director William Castle was known more for his movies’ crazy gimmicks than their fear factor, but House on Haunted Hill is a bone-chilling exception. A group of five people are invited to a millionaire’s house and offered $10,000 apiece to stay the night. It seems like a simple game, but as the evening moves along the guests realize dark forces are at work in the house on haunted hill. Even after almost 60 years, House on Haunted Hill holds up for its sounds design, brilliant pacing, and an unforgettable ending. Even if you don’t “like black and white movies” give this one your time.

If you’re down to pay a little extra, we highly suggest renting the 1999 remake for a streaming horror double feature. Watching them back to back helps both films shine. Plus, it’s nice to see just how terrifying the original is without CGI.

Let’s be clear; this is not a good movie. It’s a great movie. Lindsay Lohan plays two roles in this galaxy-brained horror thriller of family secrets and psychic connections that Entertainment Weekly described as “105 minutes of your life you will never get back.” Mashing up Twin Peaks, The Bionic Woman, and The Twilight Zone, the filmmakers take big swings at bold ideas and miss constantly. However, along the way, they accidentally created an occasionally spooky, always entertaining camp disaster. Big budget B-movies rarely achieve the levels of pure accidental brilliance that permeate I Know Who Killed Me. Just brace yourself for the incredible cameo by Art Bell as himself.

This ’90s video store favorite may be best remembered by its numerous direct-to-video sequels, but the original is a gem that deserves rediscovery. When an ancient treasure containing an evil djinn (aka genie) falls into the hands of a jewelry appraiser, hell is unleashed on Earth. As she desperately tries to solve the mystery of banishing the djinn, our titular monster sets about granting twisted wishes for anyone who asks. This is one of the last great practical effects movies of the ’90s, overflowing with graphically violent examples of the human imagination. Vicious, witty, and full of jaw-dropping gore set pieces, Wishmaster is a forgotten horror masterpiece. Now, it finds new life as a streaming Halloween classic.

Five years after an unexplained phenomenon killed 15 people during a Halloween haunted house, a group of documentarians set out to uncover what happened that night. Mixing footage from the haunted house with the documentary crew’s investigation, Hell House LLC manages to prove there is still fresh blood to be found in the found footage genre. Director Stephen Cognetti plays with found footage cliches to keep viewers on their toes, building to a finale full of genuine surprises.

What services will you need to take part in streaming Halloween?