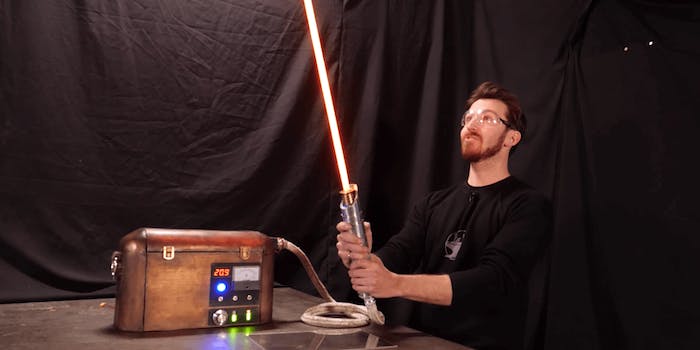 The 'world's first protosaber' is frighteningly powerful and dangerous.

A popular YouTube channel has unveiled what it is calling the “world’s first protosaber” based on the iconic Jedi weapon from the Star Wars franchise.

The weapon was created by the team over at the Hacksmith, a group that transforms fictional items from movies and comics into working prototypes.

After showcasing its first lightsaber design back in January, the team returned this month with a new and improved model that is undoubtedly out of this world.

But the protosaber isn’t identical to what you would see in Star Wars. The group explains that an actual lightsaber would require roughly 1.69 gigajoules of thermal energy, roughly the same amount of energy produced by a bolt of lightning.

Since you can’t stick a nuclear reactor into the handle of a sword, the team created an external power supply using a ton of lithium-ion batteries instead.

The end result is a frighteningly powerful and dangerous lightsaber that you definitely shouldn’t try to create at home. While not quite as impressive as its fictional counterpart, the protosaber is still able to cut through objects like a hot knife through butter.

The group now plans to create a second protosaber in order to have a lightsaber duel, which sounds like a totally good idea.

The Hacksmith has previously made headlines for creating everything from Thor’s hammer to Iron Man’s helmet.