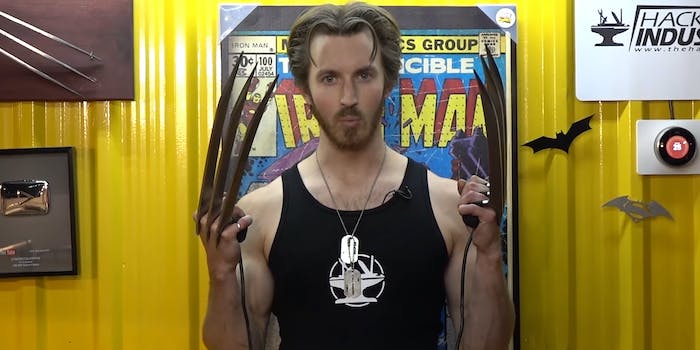 X-Men fan creates electrified Wolverine claws, because why not?

Plenty of geek builders have tried their hands at recreating Wolverine’s claws before, but the latest model from the Hacksmith has plenty of spark—literally.

While he first made a pair of wearable Wolverine claws years ago, the Hacksmith has connected a pair to a car battery ahead of Logan‘s theatrical release. Now, every time he touches something conductive, the claws start to spark. The battery produces around 100 amps that travel through the claws, so it’s not enough to kill the battery (but still probably not something you should try at home.)

He also tries his hand at cutting through some items, and although it’s not as smooth or effective as Wolverine, they could still be deadly. He’s fine wearing them since skin is resilient, but if he were to pull a Wolverine on someone he could still kill them with the voltage—if the multiple stab wounds don’t do it.