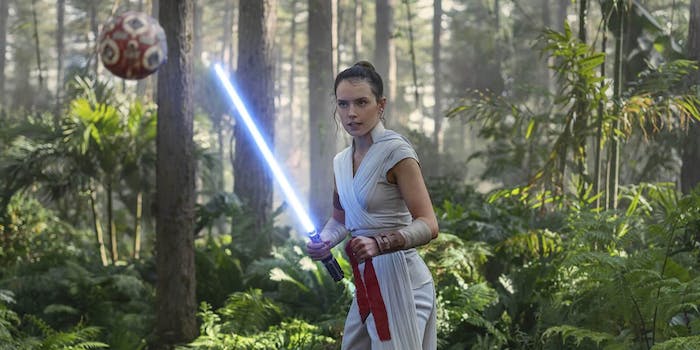 ‘Star Wars: The Rise of Skywalker’ is not getting good reviews

The last film in the Skywalker saga currently has a 'rotten' rating.

The first reviews for Star Wars: The Rise of Skywalker are in, and they are not good. The J.J. Abrams-led film, which closes the chapter on the newest trilogy, as well as the nine-part Skywalker saga that has spanned more than 40 years, was always going to be divisive. Fans take the Star Wars franchise very seriously, and everyone has different ideas on how it should end. But no one expected the film to be panned this hard from critics, especially since the previous two films, The Last Jedi and The Force Awakens, both hold more than a 90% fresh rating on Rotten Tomatoes.

As of Wednesday afternoon, The Rise of Skywalker was at 58% on Rotten Tomatoes, with reviews counted from 147 critics. It’s still early—some critics have yet to post their reviews, and the movie doesn’t officially open to the public in the U.S. until Thursday, Dec. 19. Right now, however, the consensus is that the movie is plot-heavy and cares too much about fan service. In other words, it seems like a strong departure from The Last Jedi, which took creative risks and made a different kind of Star Wars movie—which some people didn’t care for, but that’s another story.

On Twitter, people reacted to The Rise of Skywalker‘s Rotten Tomatoes score by comparing it to previous Star Wars films, as well as previous blockbusters that Abrams directed.

The Last Jedi: 91% on Rotten Tomatoes

The Rise of Skywalker: 56% on Rotten Tomatoes

rise of skywalker reviewing so low is genuinely surprising. jj abrams has always made terrible movies but it is left to people on the tl to say so. curious what changed. into darkness got 84% on rotten tomatoes!!!! everyone hates that piece of shit!!!!

And people are guessing how director Rian Johnson, who endured a lot of hate over the divisive The Last Jedi, is feeling right about now. His Star Wars film was well-received by critics, with a 91% fresh rating on Rotten Tomatoes.

Some fans remain optimistic that The Rise of Skywalker will be good, or at least enjoyable since audiences sometimes love movies that are panned by critics.

Since Rotten Tomatoes seems to be the focus of discussion once again, here are a few films that I think are great, despite mixed or negative critical scores. pic.twitter.com/d8Tf4i6Kij

Tom Hooper’s Cats movie, which also comes out this weekend, has no critic reviews yet. But what a weird week this would be if Cats scored higher than a Star Wars movie.