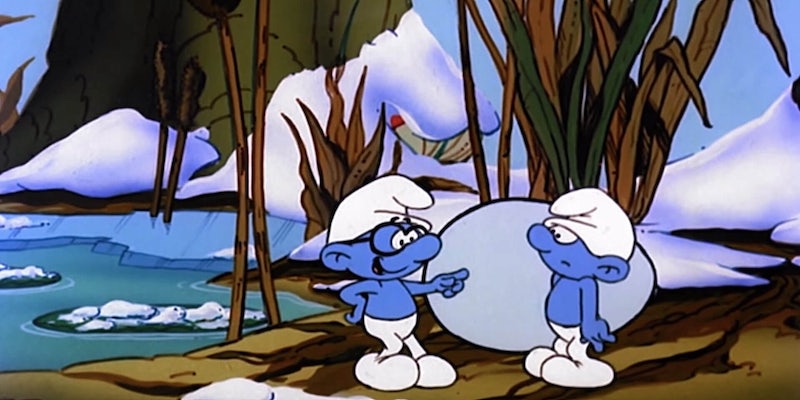 What does ‘smurfing’ mean?

Everything you need to know about the gaming term.

There’s an ongoing epidemic in online gaming—and it’s linked to everyone’s favorite blue mushroom-dwellers. Gamers have been using the word ‘smurfing’ for years. But what exactly is it? Why does it matter?

Essentially, smurfing is when veteran gamers create secret, secondary accounts. This lets them score easy wins against inexperienced players. These undercover pros are called ‘smurfs,’ and the gaming community generally frowns upon them.

Here’s everything you need to know about who established this practice and what it means for modern gamers.

Smurfing originated in the late ’90s with two top-tier World of Warcraft players, Geoff Frazier and Greg Boyko. Frazier (AKA ‘Schlongor’) and Boyko (AKA ‘Warp’) were so skilled at Warcraft, they had trouble finding anyone who wanted to play them. Consequently, they both made extra accounts to hide their identities. ‘Schlongor’ became ‘Papasmurf’ and ‘Warp’ became ‘Smurfette.’

How smurfing is used in gaming now

The co-op gaming landscape is a bit different now than it was in Papasmurf and Smurfette’s time. Nowadays, most online multiplayers don’t let gamers choose who to play against. Instead, they use automated matchmaking. Algorithms analyze player skill levels and match competitors accordingly. Unfortunately for pro gamers, this automation makes finding easier opponents pretty much impossible.

Furthermore, the rise of the celebrity Twitch streamer motivates celebrity gamers not only to play, but perform for their audiences. What could be more entertaining than some noob getting destroyed by a pro?

Enter the steady rise of mainstream smurfs. More and more popular streamers like Tfue, Freakazoid CSGO, and Shroud are publicly posting videos of them smurfing innocent newbies. These cheap laughs certainly generate views. However, even loyal fans aren’t thrilled with the practice.

The realities of smurfing

Pro gamers can certainly do whatever they want, and everyone should be able to play with their friends—regardless of rank. Unfortunately, creating alt accounts to compete with low-ranking players can have actual consequences.

1) How new players get hurt

There aren’t many arguments that support smurfing. Some players claim competing against pros is a learning experience. Others point out that experienced gamers deserve a relaxing break every now and then to play with ordinary people.

On the other hand, there are endless reasons not to smurf. First and foremost, getting repeatedly crushed is incredibly disheartening for novices when they’re just starting out. Furthermore, defeats have tangible impacts on fledgling players. Losses prevent them from moving up the ranks, and beginner skill ranks really can’t afford to take a hit. Smurfing can even discourage fresh faces from wanting to play altogether, which is the opposite of what gaming is all about.

Ultimately, this kind of gameplay is only enjoyable for smurfs. Nothing sucks the fun out of a game more it being literally unplayable. So why does smurfing still exist?

2) How developers handle the problem

Unfortunately, creating a secondary account just to play at a lower rank isn’t technically cheating. As such, there isn’t much video game developers can do about the practice. Moreover, more accounts equate to more money for gaming companies, so there’s no real incentive to shut the practice down.

Much to gamers’ outrage, director of Blizzard Entertainment’s Overwatch Jeff Kaplan went as far as to say that smurfing “isn’t really that big of an issue.” Kaplan pointed out that skilled gamers move up the ranks quickly anyway. This fails to account for the pros that cleverly manage to manipulate their rank into remaining low.

League of Legends developer Riot Games didn’t dismiss smurfing like Blizzard did, but they never banned it, either. On the flip side, Psyonix—now owned by Epic games—classified it as cheating in 2016 and lets players report instances of smurfing in-game.