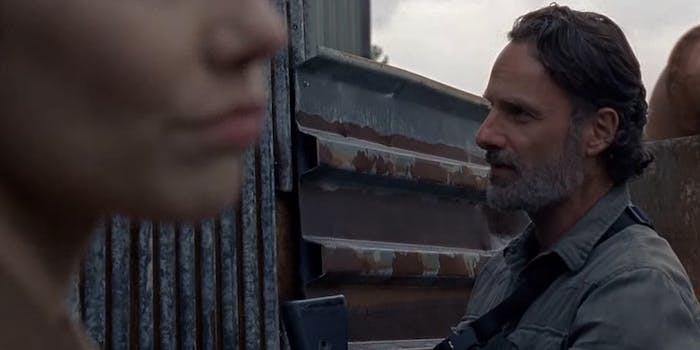 ‘The Walking Dead’ returns with guns blazing in its 100th episode

The Group brings the war straight to the Saviors.

It’s been a long (and often bumpy) road for The Walking Dead to arrive at its milestone 100th episode. It has had to juggle the human horror of the post-apocalyptic world with the zombie horror, but it didn’t always flow seamlessly. The much-maligned seventh season was often weighed down by Negan’s sheer brutality and apparent love of psychological torture, and it took most of the season to let up.

The season 8 premiere is a lot more refreshing in comparison, and it delivers a staggering blow, albeit not without some clunky storytelling issues along the way.

It begins to tell multiple stories weaved together, though it’s unclear where some of those scenes take place in terms of the larger plot. We spend the most time with Rick and the Group’s assault on the Sanctuary, but in between we’re always given teases of a close-up shot of Rick’s teary eyes and a visibly older Rick (or Old Man Rick), who’s much calmer and relaxed than we’ve seen him in a very long time.

This future timeline (if it is in fact their future and not a hallucination) reveals only a few survivors of the war to come and begins to tease the idea that things might end up alright, or as much as they can with Walkers everywhere. (And as far as repetitive songs in a single episode go, I’ll take some Weird Al Yankovic over “Easy Street” any day.)

But first, we’ll probably have to watch Rick fall. Not in the sense of him needing to rise up; we already saw him do that last season. The Rick Grimes we see in “Mercy” is more confident. With Dwight on the inside, he’s able to meticulously deploy his “soldiers” from Alexandria, Hilltop, and the Kingdom to take out Negan’s guards along the road to the Sanctuary. They’ve set multiple explosive traps to take out as many of Negan’s people as possible, each exploding with a single gunshot from Daryl while riding a motorcycle, action-movie style. They have cover on their vehicles so that they have something to hide behind when the battle begins, though it all eventually goes awry.

Between all of the fighting are snippets of lighter moments, reunions, and bonding, which are more than welcome after a rather dark and grim season 7. Hints of what we liked about many of those characters are still there even in a time of war.

Rick, on the other hand, shows worrying hints of cruelty and hubris. Before they bring the fight to Negan he tells his people that “the bigger world is ours by right.” In a scene that homages The Walking Dead’s first episode, Carl hears a man begin to approach him asking for help. A few seasons ago Rick would’ve readily aided him or at least asked him his Three Questions. Now Rick’s the one chasing people away before they have a chance to betray him. Carl goes back to leave the man some food, apparently taking Michonne’s words to heart: “This is your show.”

As the fighting gets more personal, Rick’s message to others—that this war is not about him—starts becoming about as believable as Walter White’s Breaking Bad lie that he started making meth to provide for his family. He’s not as concerned about keeping the higher ground or keeping his family safe, he just wants to kill Negan.

“I don’t wanna just march them into the line of fire because I wanna play ‘My Dick Is Bigger Than Yours,’” Negan tells Rick when they confront one another more than halfway into the episode. “It is. We both know it. But, I’m also comfortable enough to accept the fact if it wasn’t. I’m certainly not going to let my people die over that shit like you’re about to.”

Except Negan is wrong. Other factors might have come into play and personal vendettas bled into their war over time, but it’s always been a dick measuring contest between them, and at the end of the day, a lot of people will probably die for it—even if Rick himself doesn’t. Rick didn’t want to wait anymore, so he took the war to Negan. And it will doom all of them in ways large and small.