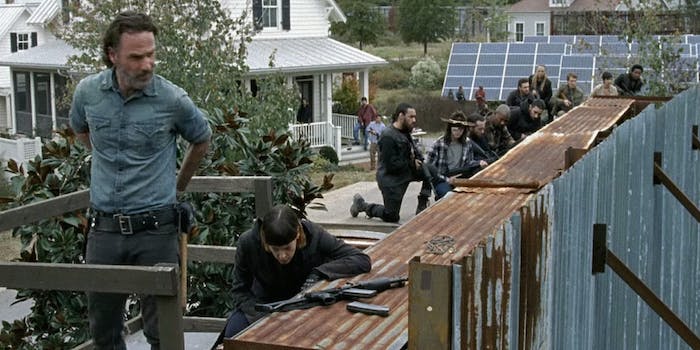 The dead weight of ‘The Walking Dead’

After half a season, we're still waiting for a war to start.

When the first half of The Walking Dead’s seventh season ended in December, it set up the beginning of a showdown between the Saviors and an alliance of surrounding communities. Four months later as we gear toward the season finale… we’re still waiting.

The Walking Dead’s seventh season has not gone, to put it nicely, smoothly. Negan’s jarring arrival left a bitter taste in fans’ mouths long after watching the season premiere that was designed in part to fuck with the audience as much as it did the characters. Viewers were restless and morale was low enough that some people thought it was plausible that Negan would ruthlessly kill a toddler. The back half of the season had some lighter moments and a few smiles, but suffered from some of the same problems the first half did.

As we head into the season 7 finale—The Walking Dead’s 99th episode—how far have we come and where do we go from here?

What do you do when a show can’t hook its audience?

The Walking Dead received plenty of complaints from fans about its gratuitous violence over the first eight episodes and the over-saturation of its villain, Negan. Those complaints came from fans who knew the kind of show they were watching and still felt it was too much. In the months between half-seasons, the show’s producers admitted that the backlash had affected them and executive producer Gale Anne Hurd said the show made sure to “tone it down for episodes we were still filming for later on in the season.”

Although Negan still loomed large over nearly every character on The Walking Dead—most of them who served him out of fear, loyalty, or both—he wasn’t always seen. Less is more with the show’s biggest villain to date, and at times Negan was still an effective villain without showing up himself. It also gave everyone else a chance to breathe and even smile for a moment.

On the other hand, not a whole lot has happened up to this point. Rick rallied some of the groups together like the Kingdom, members of Hilltop who aren’t Gregory, and Jadis’ group (once presented with enough guns). He also stole all of Oceanside’s guns after the all-female community refused to fight alongside them against Negan. He and Michonne spent an episode seeking out weapons, while other episodes looked at Hilltop, how Eugene settled into the Sanctuary, and Rosita and Sasha’s poorly thought-out attempt to storm the Sanctuary and kill Negan. Morgan’s promise not to kill ended after an episode of tense moments and bloodshed, and Negan stabbed David for attempting to rape Sasha, a scene straight from the comics. While Negan may be a cold-hearted killer, he draws the line at rape.

After watching the back half, many episodes blur together, and not in a good way. At times, it was even boring as we wait months for the war to begin.

At its best, The Walking Dead balanced smaller character episodes with high stakes tension. The zombies aren’t the only threat in this post-apocalyptic world, but they were still a threat. The human villains still had an ounce of humanity left in them, even when they were as unlikeable as Negan. Some of those moments are still there, but they don’t land nearly as well as they once did. The season premiere may have been loathed by many of its fans, but at least there was something to be angry about instead of indifferent.

They’re in a tough spot, to be sure: How do you balance the action and character development. With such a large audience—many of whom want something different—you can’t win.

There’s not enough story to stretch across 16 episodes

It’s one thing for The Walking Dead to want to start the war between the Saviors and Rick Grimes’ alliance of communities at the end of the season. It allows fans to speculate over what could happen in season 8 over the summer, sets up the possibility that people won’t make it out alive, and it would be payback for the premiere—especially if Maggie, who’s laid low for most of the season pretending to be dead, emerges as a major leader.

It’s less certain why The Walking Dead needed 16 episodes this season to get there.

Pacing has long been an issue for The Walking Dead. Some arcs take too long to get anywhere, like the search for Sophia in season 2, while others, like season 5’s Terminus arc, wrapped up way too quickly. Even this season the issues were on the forefront as many of the episodes didn’t offer much—and ran too long. Now, after seven episodes, all we have is Rick Grimes with a whole bunch of guns, Sasha and Eugene being held by the Saviors, and Dwight offering to betray Negan. At times it was evident the show was stalling for time so it could kick off the war in the finale.

The season may have flowed much better by cutting an episode or two, but unless the show’s allowed to tell its story in fewer episodes this is probably an issue we’ll be dealing with for awhile.

The casting elephant in the room

Speculation on which actors will leave a high-profile show are often fueled by the plot, but for one of The Walking Dead’s longtime cast members, it’s outside news that’s leading  many to believe that her time is almost up.

In December, Sonequa Martin-Green (Sasha) was officially cast as the lead in CBS All-Access’ Star Trek: Discovery, and soon after The Walking Dead showrunner Scott Gimple told reporters that Martin-Green would be able to handle both shows. Most Walking Dead actors don’t appear in every single episode so if both shows filmed at the same time The Walking Dead could hypothetically work around Star Trek: Discovery’s schedule since the former is more of an ensemble show. However, showrunners have lied in the past in order to keep spoilers under wraps, and the show’s very plot suggests that Sasha will soon meet her maker.

In “The Other Side,” Sasha and Rosita set off on a suicide mission to kill Negan at the Sanctuary. They both knew that they probably wouldn’t make out alive but they wanted to avenge Abraham and everyone else who died at the hands of Negan. At the end of the episode, Sasha pushes Rosita out so that she can escape, leaving Sasha enclosed in the Sanctuary.

Up to this point she’s been given the plot of Holly, who was Abraham’s former girlfriend in the comics (but turned out to be a minor character in the show), and it doesn’t end well for Holly. She’s used as a hostage by Negan but is later revealed to have already turned into a zombie.

It’s unclear if Sasha will continue with Holly’s plot, but things don’t look good for her. If she doesn’t use the suicide pill Eugene gave her, she might try to continue her doomed mission. If it feels predictable, you might have Star Trek to blame.

Gimple thinks that The Walking Dead could last 20 years—but should it?

At PaleyFest last week, Gimple told the audience that he hoped to make the show for 20 years

“We try to reinvent the show every eight episodes,” Gimple said. “We have this story that is a fidelity to the comic book, but we’re also exploring original stuff, and those things help us go on every year. We want to try do it better, do things we haven’t done, take risks. It’s scary as hell, but as long as we keep doing that the show can go on and on.”

After Sunday’s episode, The Walking Dead will have made 99 episodes and covered well over 100 issues with no signs of taking over the comic, which is still running, anytime soon. Despite its decreasing ratings it’s still one of the most popular shows on television and a cash cow for AMC. Soon it might become like another show that while immensely popular, people boggle at its continued presence on the air.

Hypothetically The Walking Dead could last 20 years as long as the actors and creative team still want to do it. But after a certain point, it might just be better to bring out the bat.