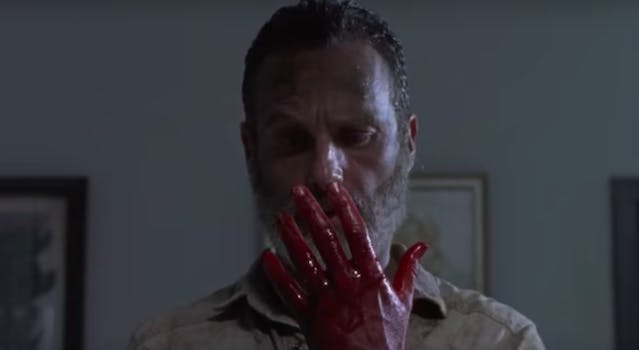 The actor behind Rick Grimes has made quite the impact on his fellow actors, and they let him know it.

The Walking Dead’s central star, actor Andrew Lincoln— aka Sheriff Rick Grimes—is finally saying goodbye to the zombie apocalypse on Sunday in his final episode. It’s been eight years since Rick woke up from a medical coma to discover the world had turned to hell, and started building up his coalition of tough, but loveable survivors. It’s sure to be a tearjerker, and the cast of The Walking Dead took a moment to say their goodbyes to Lincoln in an emotional video.

“He’s like one of my best friends ever,” said Norman Reedus, who plays the fan favorite southerner Daryl Dixon. “He’s very, very dear to me. He’s taught me to be a better father, a better friend, a better actor.”

One of the most common refrains from the cast is that Andrew Lincoln was just one of the nicest fellow actors they’d ever worked with. This included Lincoln going to some great lengths to make his costars feel at home.

“The very first time I met him, he wasn’t even working, and he came down an hour south of where he was living just to meet me and Michael Cudlitz [Sergeant Abraham Ford] and Christian Serratos [Rosita Espinosa],” said Josh McDermitt, who plays Eugene Porter. “I thought, wow, what a great guy.”

The video closes with none other than Steven Yeun, who played Glenn Rhee, giving his parting words.

“I keep racking my brain to figure out something to say, and every single thing kind of fails, so all I really want to say is: Andrew, I love you,” Yeun said.

That’s a lot of heart for a series known for cold, shambling corpses.

Andrew Lincoln initially announced his intentions to leave The Walking Dead back in July at Comic-Con. Lincoln, who is originally from the UK, said he was making the departure to be able to spend more time with his family and two young children.

The Walking Dead’s 9th season is airing right now, and if you need to know how and where you can watch it, we’ve got you covered with our Walking Dead live stream guide.