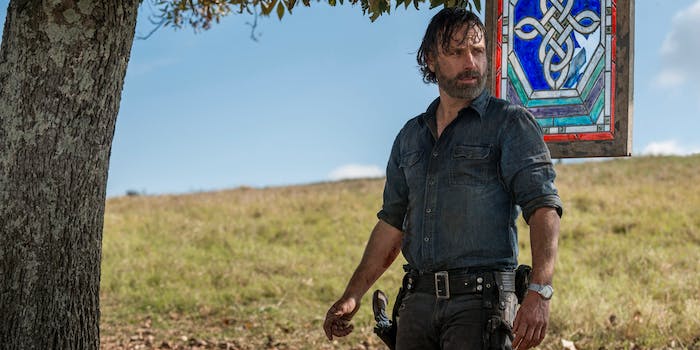 Can ‘The Walking Dead’ survive without Andrew Lincoln? (updated)

He's reportedly on his way out.

Warning: This article contains speculation for season 9 of The Walking Dead.

Is the face of The Walking Dead about to take his final bow? A new report claims that one of the show’s original cast members may leave the show during the next season.

According to Collider, Andrew Lincoln—who’s played Rick Grimes since the start of The Walking Dead’s television run in 2011—will exit the show during season 9. Details on how Lincoln will make his exit are unclear, but he will reportedly only appear in six episodes next season. Since The Walking Dead is an ensemble show, Lincoln’s episode count doesn’t mean that he’ll necessarily leave six episodes into season 9. (Lauren Cohan, who plays Maggie on the show, also has a six-episode count now that she also has a new ABC series to film.)

With Lincoln’s exit, The Walking Dead would look toward Norman Reedus’ fan-favorite Daryl Dixon—a character created just for the show who’s been around since the beginning—to take over as the show’s lead and is reportedly being “offered substantial compensation.”

The Walking Dead has been trudging along in the wake of the zombie apocalypse for eight seasons now, and despite a rating decline that’s now extended several seasons, it’s still the most most-watched TV show on Sunday nights. People still watch, of course, but fans have been getting increasingly frustrated over the direction of the show over the past few seasons.

Some of them may cite how the show handled the season 7 deaths of Glenn and Abraham at the hands of Negan, Carl Grimes’ death at the beginning of season 8, or events that took place even earlier. Rick, in particular, has been a frustrating character to watch, one who switches between character extremes with no rhyme or reason, with his plot armor shielding him from certain death for so long it’s become harder to believe.

Lincoln’s exit from The Walking Dead could show him walking away into exile or joining up with another group, but given that he’s the face of the group facing off against Negan and the Saviors—as well as every other foe they’ve faced so far—it’s far more likely that Rick will die. Like Carl in season 8, Rick is still alive in the comics, meaning that if The Walking Dead is planning to move forward with some of Rick’s comic book arc (the show isn’t a direct adaptation), it will have to maneuver around a pretty big hole. Some of that will likely be left to Daryl, but the sudden character growth from Daryl after being stagnant for several seasons is a tough sell.

There’s also concern over whether AMC can do Lincoln’s exit justice. He’s one of the show’s few surviving original cast members—Reedus and Melissa McBride (Carol) are the others—and he’s someone fans have followed for years through the highs, lows, and even that half-season where he had hallucinations of his dead wife Lori. And there’s even more pressure to do this one right after the cold reception to the somewhat callous handling of Carl’s death last season, something that even disappointed one of his castmates.

But as polarizing as Rick has become to some fans, there’s an even bigger question looming over Lincoln’s exit. Can the show survive without him? Or will it stumble forward like one of its titular walking dead until the show starts carving a path to the end?

Update 7:45am CT, July 21: Lincoln confirmed at San Diego Comic-Con on Friday, July 20 that season 9 will be his last on the show.

“This will be my last season, playing the part of Rick Grimes,” Lincoln said, via TV Line. “I love this show. It means everything to me. I love the people who make this show. I promise not to cry—I’ve done enough crying on screen … I’m particularly fond of the people who watch this show, you people. This has been the most extraordinary, amazing and beautiful experience of my career… So I just want to thank you.”

So, how will it end for the man who plays Rick Grimes? According to executive producer Robert Kirkman, Lincoln wants his exit to be “something special.”

“We’ve got something amazing planned… anybody who loves Rick Grimes, loves the world of The Walking Dead, you’re gonna want to see what we do,” Kirkman said.