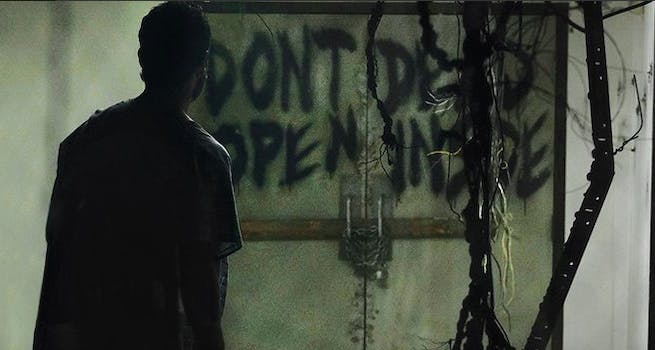 The Walking Dead has become one of the most popular television series of the 2010s, with viewers continuing to tune in to the post-apocalyptic horror show as it goes through its eighth season. There are many, many reasons why people watch The Walking Dead: the characters, the storyline, and the gore. But like every other television series that exists in the age of social media, also the memes. Memes have been with The Walking Dead since its premiere on Oct. 31, 2010, and as the show has changed throughout the years, so have its memes.

Of course, with the memeification of a TV series, sometimes a meme will be created well after it debuts on TV. During “Days Go By,” the first episode of The Walking Dead, protagonist Rick Grimes wakes from a coma in a hospital and, in trying to escape the hospital, comes across a barricaded door that reads “Don’t Open, Dead Inside.” Ultimately, these four words spawned a meme several years after the episode’s premiere, with some fans speaking on how the door’s message could read “Don’t Dead, Open Inside” instead.

On Reddit, a “Don’t Dead, Open Inside” thread actually exists, with viewers discussing why whoever wrote the message on the doors did it how they did. “I always thought it was written that way so if one of the doors got obscured/obstructed the message would still make sense,” one user wrote before admitting “but maybe I’m overthinking it some.”

When a video detailing the origins of the door was first promoted on The Walking Dead’s Twitter, fans were quick to respond to the tweet with “Don’t Dead, Open Inside,” further circulating the meme into virality. The phrase is also referenced in other memes making fun of messages that are read incorrectly depending on how you’re reading them.

Granted, this surely isn’t the biggest meme to come from The Walking Dead but it’s a necessary inclusion that not only speaks to the obsession that fans have with the show, but the strange humor they find out of the series too.

Case in point? A meme dedicated to Rick’s son Carl and his inability to stay inside a house. First popping up in season two, fans began to notice that the kid couldn’t fucking stay in the house when asked to do so.

“…everyone wants to know why Carl’s not in the house,” Glen Mazzara, a producer on The Walking Dead, said to the Los Angeles Times in 2012. “Well, it’s boring to sit in a house. And he’s a little boy and he wants to mix it up and stuff.”

Still, that didn’t stop fans from expressing their frustration with Carl and his adolescent ignorance. From videos such as “Carl, Stay in the House” and “Where’s Carl” to this Deviant Art meme and even College Humor writing an article titled “10 Reasons Why The Walking Dead Should Just Kill Carl,” the anger fans have toward Carl not staying in the house when instructed to do so has manifested into one of the most popular memes from the show.

One fan even made a supercut of the number of times Rick says Carl’s name throughout the first four seasons, tallying up a surprising 41 Carls.

But the best Carl-related meme has to be the dad jokes between him and his father. Turning one of the saddest moments in the show’s history (Rick’s wife Beth dying while giving labor) into pure lols, the meme is a screengrab of Carl and Rick dealing with Beth’s death. It seems as if the dad jokes meme originally came from this viral video titled “Rick Founds Out That Carl Is Gay.” From there the meme then transformed into what it is now, and there’s plenty of them throughout the internet.

There’s even a subreddit dedicated to the meme. Chandler Riggs, who portrays Carl, could care less about the memes dedicated to his character.

“You know it was kind of funny for the first few months. But five after the meme originated, it kind of gets old—especially when people yell ‘Coral’ at me,” Riggs said in an interview with Triple J.

However, the Carl memes have arguably been succeeded by memes centered around The Walking Dead’s charming asshole antagonist—Negan. When season six ended with Negan beating the literal brains out of a member of Rick’s group, the memes came quick. For example, this viral video by YouTube user kristo499 that recreated the scene with Legos.

The sheer brutality of the moment is only lessened a little bit as a Lego Negan menacingly says “Eeny, meeny, miny, moe” to Lego versions of Rick, Carl, Glenn, Michonne, and others. Once season seven came around to reveal Negan beat not only Abraham but Glenn to death with his baseball bat, they made a follow-up video recreating this scene as well.

There were other parodies of the scene created, including this Grand Theft Auto V one. But easily the best one came unexpectedly from a Saturday Night Live sketch with the one and only Dave Chappelle.

Portraying Negan, Chappelle remade the scene but with a collection of his old Chappelle’s Show characters as his hostages. Chappelle ends up knocking the head off Tyrone Biggums, whose addiction to crack apparently makes him impervious to pain. To this day the sketch has over 16 million views and over 11,000 comments.

Of course, The Walking Dead has many, many, other memes but these are the best examples of how fans find humor throughout what is a very, very intense show.