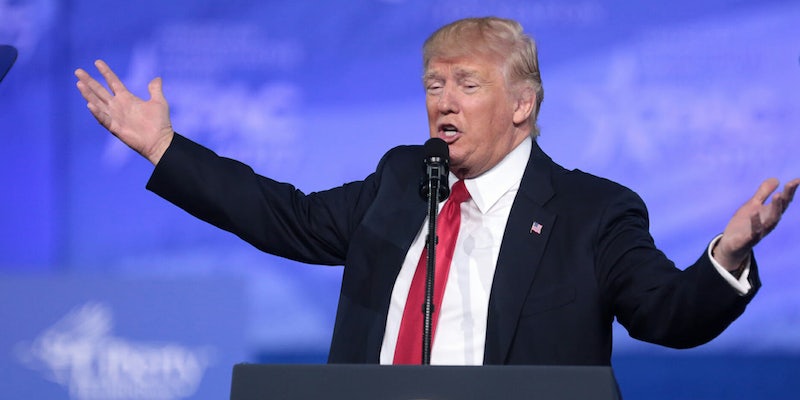 It sounds like no one in the video game industry actually got the memo that President Donald Trump plans to meet with them about gun violence next week, according to Rolling Stone.

Representatives from the Entertainment Software Association—whose 34 members includes Nintendo, Microsoft, Electronic Arts, and Sony Interactive Entertainment—told the magazine that no one they have contacted within the industry has received an invitation to the White House.

“ESA and our member companies have not received an invitation to meet with President Trump,” a spokesman for the Entertainment Software Association said.

NEW: The WH announced Trump will meet w video game industry execs next week.
But, tonight, the Entertainment Software Assn says neither ESA, nor any of its members — the biggest names in video games (Nintendo, Microsoft, PlayStation, EA) — has received any such invitation.

When asked why it looks like no new gun legislation will be introduced in Congress next week, White House spokeswoman Sarah Huckabee Sanders told the press on Thursday that President Trump plans to meet with video game industry members in the wake of the Parkland shooting.

“The president has met with a number of stakeholders,” Sanders said. “Next week he’ll also be meeting with members of the video game industry to see what they can do on that front as well. This is going to be an ongoing process and something that we don’t expect to happen overnight, but something that we’re going to continue to be engaged in and continue look for the best ways possible to make sure we’re doing everything we can to protect schools across the country.”

People on Twitter were quick to point out that video games are already vetted and rated by the ESRB before being sold to underage players. A broad number of studies have also debunked supposed connections between video games and violence.

As people turn to point fingers at the video game industry for the gun problem we are experiencing in the US, it’s important to know that this theory has been debunked many times before. Video games are not the problem, proper gun control and mental health is. pic.twitter.com/wnnE4tojVO

Who is he going to meet with? Activision? EA? ID? Bungie? Valve? Nintendo?

Also, since the video game industry has spent literally DECADES rejecting the idea that they’re to blame for violence, this sounds like a pretty contentious meeting in the making. https://t.co/YD5J1ejsnr

Last week Trump said some of the blame for violence—in the context of school shootings and school safety—should rest with violent video games and movies, during a discussion at the White House about school safety in light of the shooting at Marjory Stoneman Douglas High School last week.