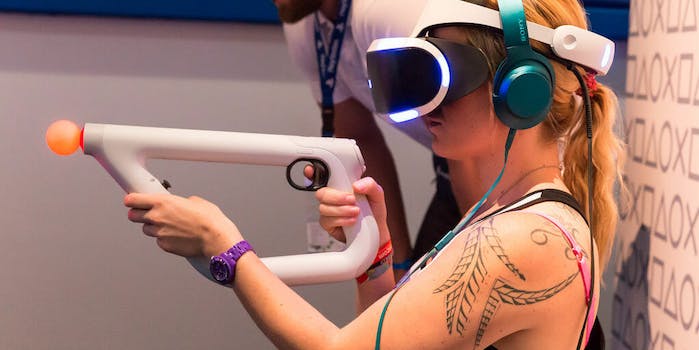 We should definitely think twice before blaming games for violence.

Scientists have been investigating the impact of violent video games on behavior for more than two decades, and the results are still being debated. In a 2015 resolution on games, the American Psychological Association reported that multiple studies found a link between violent game exposure and aggressive behavior, though critics at the time questioned the findings.

Now, a new study published by researchers at the University of York in the journal Computers in Human Behaviour further challenges the connection.

It has long been theorized that exposure to in-game concepts like violence has a “priming” effect on players that ultimately impacts behavior, leading scientists to believe that a player exposed to in-game violence will be more susceptible to displaying such violence in real life. The new study found the exact opposite to be true in some instances. In a series of experiments with a little over 3,000 participants (more than any past study to date), university researchers found that exposure to video game concepts like violence won’t necessarily impact behavior. It also found that increasing the realism of violent video games does mean aggressive behavior in gamers will increase.

To test the “priming theory,” participants were asked to play a game in which they were either a mouse trying not to get eaten by a cat or a car trying to avoid crashes with trucks. After playing the game, the participants were shown various pictures and asked to label them either a vehicle or an animal. If players were truly primed by the concepts of the game they played, the researchers believed it would’ve been easier for them to categorize the images associated with it. The study found that this was not the case. Participants were no faster at categorizing the images, even if they were associated with the game they played. In some cases, the reaction time of participants was slower after exposure to the game with similar objects that they had to categorize.

A separate but connected study investigated whether a game’s realism impacted players’ aggression. The study compared reactions to two different combat games with varying levels of realism. One of the games used “ragdoll physics” (when characters in the game look and move like real humans) and the other less realistic game design. After playing the game, participants were instructed to complete word association tests, where it was expected that those exposed to the more realistic game would choose more violent words. Surprisingly, the researchers found no significant difference between the word choices of players exposed to either game.

While this study may help take the heat off of the gaming industry that is far too frequently under fire for negatively influencing its users, it’s important to note that only adults were included in the experiments. Both the American Psychological Association and the American Academy of Pediatrics take a firm stance against children and teens playing violent video games.