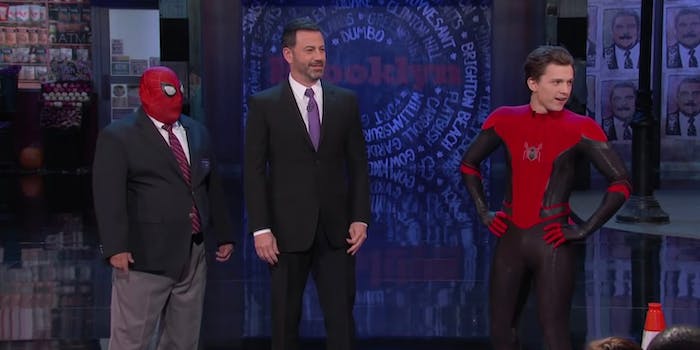 Even our friendly neighborhood Spider-Man has to help himself once in a while.

Tom Holland, the man behind the mask, swung onto Jimmy Kimmel’s Brooklyn, New York, set Thursday night without Spider-Man’s iconic mask after Kimmel’s sidekick Guillermo took it from him. A charming exchange ensued—Holland ran out of web fluid and was waiting for the B-38 bus when it happened—but it also reveals what Spider-Man’s latest suit looks like. It’s sleek with more dark blue (that almost looks black) than red. The red mask is still iconic and familiar.

It’s the same suit that Holland posted photos of earlier this week on Instagram as Holland wrapped up shooting on Spider-Man: Far From Home.

When Kimmel asked Holland whether Spider-Man: Far From Home was a prequel given Spider-Man’s fate in Avengers: Infinity War, Holland suddenly had to go. Instead of spoiling it as he’s prone to do, he suddenly sensed that Thanos was robbing a bank.

“Because Thanos is poor,” Holland offered as an explanation before running off-stage.

He does have a point; the Titan did just destroy the only piece of hardware on his possession that would be worth anything.