No, the release date of ‘The Winds of Winter’ hasn’t been revealed

And so our watch continues.

HarperCollins, the U.K. publisher of George R.R. Martin’s A Song of Ice and Fire series, has shot down reports of a publication date for The Winds of Winter after an alleged International Standard Book Number (ISBN) for the novel surfaced and a release date appeared on Amazon France’s site.

It’s been more than five years since the publication of A Dance With Dragons, the fifth book in ASOIAF, and now that Game of Thrones‘s timeline has overtaken material from the books, many fans are more than eager for a release date. Martin revealed at the start of 2016 that he missed his deadlines and that The Winds of Winter wouldn’t be released before Game of Thrones aired. We haven’t had many updates since. The most recent came last month as Martin celebrated the 20th anniversary of A Game of Thrones on his LiveJournal, where he said in parentheses, “no, sorry, I have no announcement to make on that front.”

But over the weekend, someone on the ASOIAF subreddit discovered that an ISBN was registered for The Winds of Winter. The number that appears to have been assigned with the book, the redditor notes, has a prefix associated with Penguin Random House, which owns the subsidiary publisher Random House—the parent company of ASOIAF’s publishers, Bantam Books. The general consensus in the subreddit at the time was that while it was an interesting piece of information, it didn’t confirm much; an ISBN from HarperCollins surfaced last year and had a synopsis that lead some fans to conclude it was fake.

Around that time, someone else noticed a placeholder page for The Winds of Winter had a release date Amazon France. Nothing had been publicly announced up to that point, but the page listed a publication date of “9 mars 2017,” or March 9, 2017. 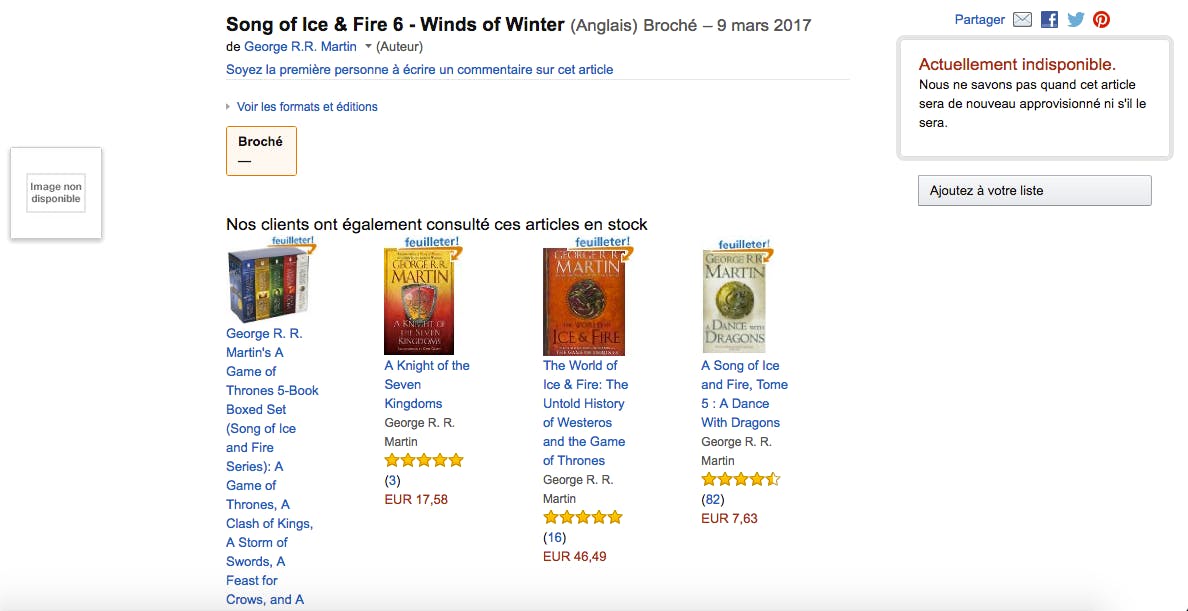 HarperCollins and its sci-fi/fantasy imprint Harper Voyager told the Independent that “nothing has been finalised regarding the publication or the date.”

While Amazon doesn’t have a page for The Winds of Winter on its U.S. or U.K. sites yet, the release date on its French site is likely just a placeholder. We’ve seen it happen with highly anticipated games such as Legend of Zelda: Breath of the Wild, which has a release date of Dec. 30, 2016 even though it won’t be released until 2017. March 9 may be a more random date than Dec. 30, but for now we’re no closer to a real release date.

Besides, Martin’s said it himself. When The Winds of Winter is done, he will announce it on his blog as he did with A Dance With Dragons. But until then, you may as well become a frequent reader of Martin’s blog so when it does happen, you can see it first.