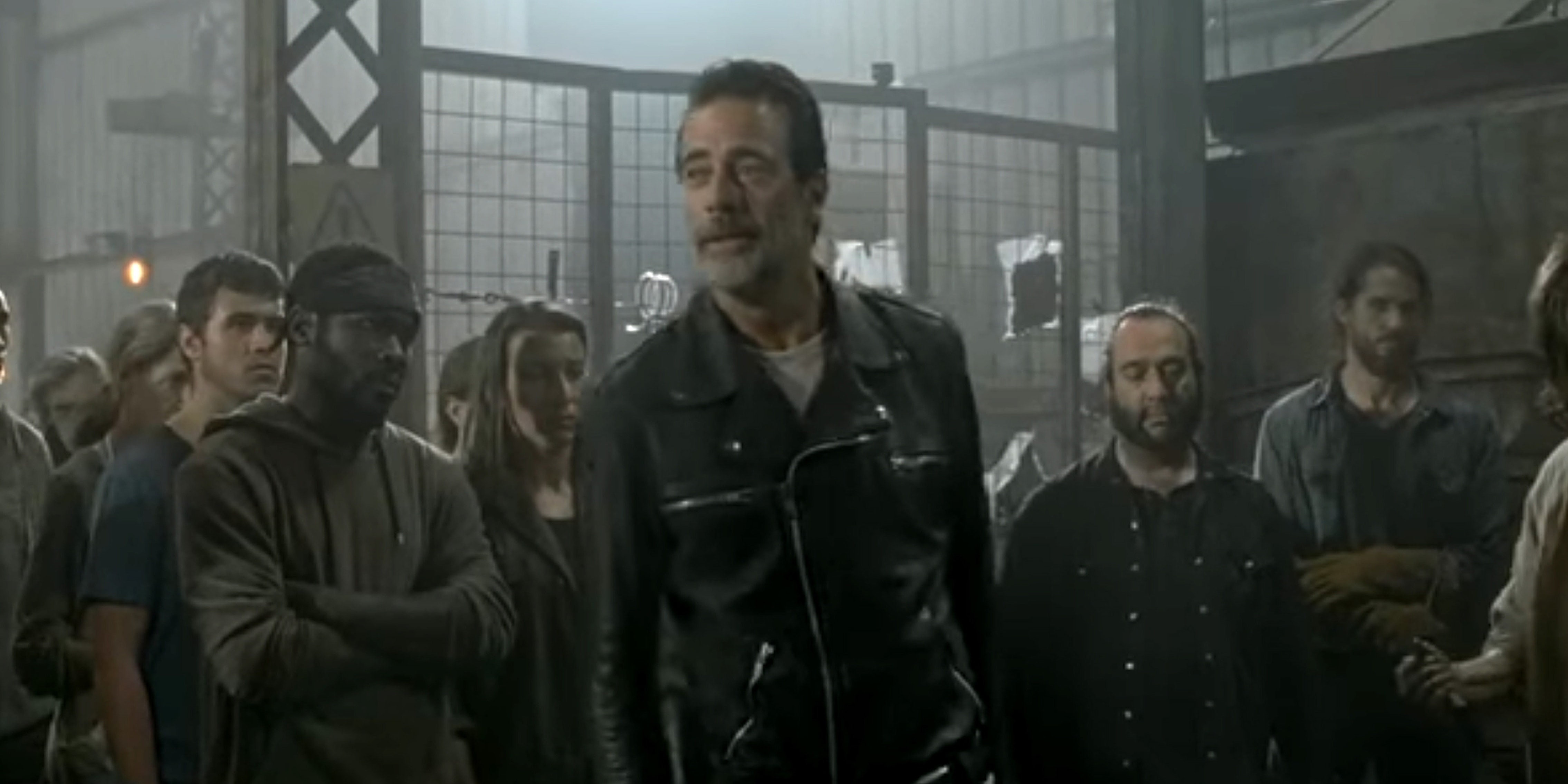 Could Negan do the unthinkable in the ‘Walking Dead’ midseason finale?

Fans are already worried about Negan's next potential victim.

Negan, as the latest villain to take The Walking Dead by storm (and not always in the best way), has done a lot to make the lives of survivors we’ve followed for years a living hell. He brutally killed Abraham and Glenn and spent the rest of the season 7 premiere psychologically torturing Rick Grimes and the audience. He treats Daryl horribly in an attempt to break him. He came into Alexandria and took almost everything he could get his hands on, although he did leave its residents their food. and  But is he capable of something much worse?

The episode, titled “Sing Me a Song,” ends on something of a cliffhanger: Negan, after stopping Carl Grimes from killing him and taking something of a liking to him, returns to Alexandria where he finds baby Judith in her nursery. He picks her up and holds her, showing a side of Negan we haven’t seen all season. Of course he still talks about how he should just kill and bury Rick and Carl, and waits for Rick to come home. Like much of what Negan does, it’s pretty disturbing.

We’ll have to wait until next week to see what comes out of the latest play from Negan, but the prospect of him toying with Judith makes some fans very worried.

Me:JESUS PLS GIVE ME THE PATIENCE CAUSE IF YOU GIVE ME STRENGTH IMA KILLA MOTHERFUCKER

Do you think Negan would hurt Judith? #TheWalkingDead #TWD

Up to this point Negan threatens to kill or harm practically everything he touches. Could Judith be next?

“He could do anything with Judith,” Executive Producer Gale Ann Hurd said on The Talking Dead. “He could kill her. He could not. He could show a tender side that’s gonna throw even more people off balance.”

It’s something that has to be considered because like many of the events in the show, it has comic book precedent.

Judith does die in the comics. She’s crushed by her mother Lori (who survived childbirth in the comics), when she’s shot by the Governor in an attempt to escape the Prison. That would’ve put her comic book death around season 4. The show even plays into that a bit: After seeing Judith’s bloody and abandoned baby seat, Rick and Carl believe she’s dead. However, Tyrese came in to save her and she’s taken care of by Tyrese and Carol before Carol returns her to Rick and Carl. But despite the odds, Judith has survived the zombie apocalypse fairly unscathed to date and has occasionally shown up in the show as a way to remind us that Rick is still caring for a toddler—one he reminds the audience probably isn’t biologically his but he still treats as his own blood.

Now that Negan has Judith in his arms, how could the finale play out?

Negan could give Judith back to Rick but use this as a lesson that he could harm her at any time. He could once again assert himself as taking half of what is his and take Judith for his own, making the women he’s made his wives raise her as another way to maintain Rick’s unwavering loyalty; he could even threaten something along the lines of, “You try and fight back and I cut out her guts and wear them as a belt” to keep Rick from rallying Alexandria to rescue her.

He could even kill her, but as much as fans fear it happening it’s unlikely that it will come to that for a couple reasons.

In the comics, Negan has something of a moral code: He doesn’t harm women and children. When last season ended on a cliffhanger over who Negan would kill, some fans believed the women facing the bat—Maggie, Rosita, Michonne, and Sasha—were safe. Whether it was because of his code or other whims of the psychopath, he ended up killing two men instead: His intended victim, Abraham, and Glenn as punishment for Daryl’s defiance. As we learn when Negan takes Carl to visit his wives, just because he might not beat his wives doesn’t mean he doesn’t still harm them. Negan says he is firmly against rape, something he also expects from the men in the Sanctuary, so he tends to use psychological torture to get those women to become his wives.

“I know you, there’s worse,” Sherry, Dwight’s ex-wife, tells Negan when he asks her if he ever hits any of them. The women are trained to respond, “I love you, Negan,” and one wife changes her mind about leaving him when she learns that returning to her actual husband will give them both a worse fate.

Plus, Negan seems to like Judith much more than the other men and women under his control. With Judith, he could potentially build a bond with her—albeit one built on a huge lie.

From a narrative perspective, having Negan kill Judith is just a bad move. While finely acted by Jeffrey Dean Morgan, Negan is a one-note character. He is a brute who uses crude language and violence to make his point.

The season premiere already tested fans’ patience with Negan, who had only had 10 minutes of screentime prior to that, and the uneven, Negan-heavy season has pressed those buttons even more. It’s telling that the best episode of the season to date is one where Negan doesn’t appear in at all. In a show that used to be about the characters but has become more about violence for violence’s sake, Negan is grating. He is relentless and in his wrath has, at times, made the show unwatchable. The Walking Dead has suffered in other ways: Ratings have dropped drastically since the highly anticipated season 7 premiere and are now at a four-year low. Turns out some fans might have actually followed through on their promise to abandon the show, although it’s certainly not the only factor.

If the show follows the comics, the Saviors and Alexandria will become allies at some point to fight against bigger enemies. (And that’s not taking into account what roles the Kingdom, ruled by King Ezekiel, and Oceanside, the hidden, all-female community created after Negan killed all of their men, will ultimately play in the show.) But none of that teamwork seems possible if Negan kills Judith.

The Walking Dead has killed off kids before. Carol shot Lizzie—a disturbed young girl who escaped the Prison with Tyreese, Judith, and her younger sister Mika—in the back of her head in season 5 after Lizzie killed Mika and nearly killed Judith. And while Carol felt she had to do it, she felt horrible about it. Judith, as a toddler, has done nothing to deserve death even with the most twisted logic.

Negan would be killing a completely innocent person, albeit one who does have her own indirect kill list.

And according to Morgan, Negan, like his comic book counterpart, is not going anywhere. We haven’t even crossed the midseason finale and he already confirmed that Negan will be in season 8. If he’s insufferable now, think of how much worse he’d be if The Walking Dead took away the one last reason for him to feel remotely human.