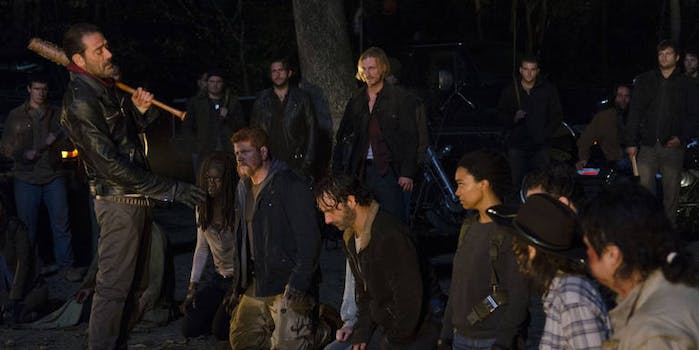 Everyone is pissed at Daryl after ‘The Walking Dead’ premiere

He made a terrible mistake.

Warning: This article contains major spoilers from the season 7 premiere of The Walking Dead.

The Walking Dead season 7 premiere was practically a snuff film. We all knew that someone was going to be savagely murdered by Negan, and millions tuned in to watch it happen.

After six months of dreadful suspense, the big reveal was even more brutal than most anticipated, as Negan smashed Abraham Ford’s head in like a pumpkin after Halloween. The barbarity should’ve ended there—but it didn’t.

An emotionally wrecked Daryl Dixon took a swing at Negan, prompting the villain to strike down another member of the group: Glenn Rhee, one of the show’s most-beloved characters, who’s been narrowly escaping death from the very first episode of the show.

Fans were livid at Daryl for being so short-sighted and inadvertently spurring Glenn’s death.

daryl's stupid redneck ass is the reason glenn died, as if I didn't hate him enough before and now I gotta suffer with him still being alive

For those having some trouble dealing with reality today, Carol Peletier posted this helpful reminder:

REMINDER:
Those who are mad at Daryl, dON'T go to Norman & hate on him.
He is not Daryl Dixon.
He's a man who was simply doing his job. #TWD