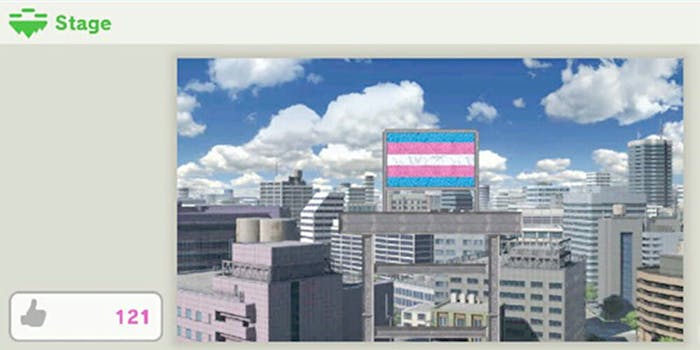 'Not surprising, but awful.'

A trans gamer is looking for answers from Nintendo after an in-game transgender flag she made was removed from Super Smash Bros. Ultimate, apparently because the flag was deemed to be “harmful” and “political.”

The new custom stage-building feature in Super Smash Bros. Ultimate initially caused controversy when gamers flooded the game with penis drawings. Players seemed hellbent on proving that the game’s shape-detection software would not flag every phallic rendering. While many of the penis drawings were eventually taken down, screenshots indicate Smash Bros. was overrun with crude images.

But Twitter user @WarmSafflina, who goes by Rose, had a different approach to the freedom of building her own stage in Super Smash Bros. Ultimate. Rose built a stage that clearly represented the transgender flag—and was shocked to find it later taken down.

In a detailed Twitter thread, first reported by the Mary Sue, Rose explained her confusion after her trans flag drawing was removed from the game and her account was suspended for nine hours.

So @Nintendo has, in their infinite wisdom, decided that this stage featuring the trans flag violates their TOS. #SmashBros #NintendoSwitch pic.twitter.com/9FWgQpcCDG

Rose soon contacted Nintendo customer service to understand why the action had been taken. She told the Daily Dot that, through a series of conversations with customer service representatives, she learned her trans flag stage had been reported by other users and marked “political.” According to Rose, a customer service supervisor also told her they, personally, are a “trans ally” but could not do much more than speculate why her flag had been removed.

“The best they could offer is because [the trans flag] was political and that they had deleted other (unspecified) flags,” Rose said. “They did reassure me once again that they didn’t share that view and promised to pass it along up the chain of command for further review.”

So, for now, BE ADVISED that the trans flags or messages in favor of trans rights and general supportiveness of trans people is capable of getting your account suspended or banned for being "political".

A screenshot Rose shared on Twitter showed the initial notice she received about the removal of her trans flag. The violation was cited as “inappropriate and/or harmful.” As Rose pointed out, statements of “political” nature are not banned in Nintendo’s Code of Conduct, so it’s unclear what Nintendo considers a “political” statement, much less a “harmful” one.

Because it keeps being brought up, I do want to point out that "political statements" are not actually covered in Nintendo's Code of Conduct. https://t.co/fzLcxo9ZG0

Nintendo did not immediately respond to the Daily Dot’s request for comment. Meanwhile, because of her Twitter thread, Rose said she’s facing an onslaught of transphobic remarks.

“It’s been awful,” Rose said. “Not surprising, but awful. I’ve been misgendered, called a ‘tranny,’ accused of hawking an ideology that pushes mutilation on children. The accusations that involve children sting the most. It’s the children who need the support more than anyone.”

Rose said if Nintendo continues taking action against her for posting trans-inclusive content, she’ll consider legal options. But she’s hoping it doesn’t come to that.