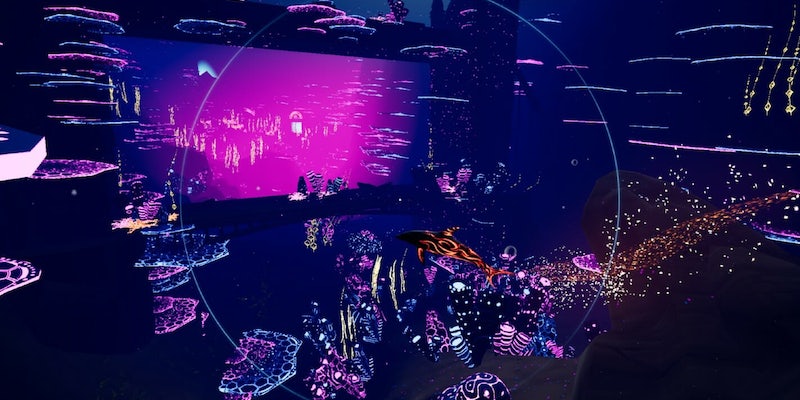 If the neon-drenched seascapes of Jupiter and Mars feel familiar, it’s for a reason. First-time developer Tigertron built this game with a specific message in mind—one that’s impossible to ignore. Players guide a pair of dolphins through an underwater world, traversing the open ocean and through iconic landmarks including the Statue of Liberty and the Tower of London.

As the opening narration sets up, this is a world ravaged and abandoned by mankind. The world of Jupiter and Mars is a world haunted by rising sea levels, global warming, and excessive pollution.

The world of Jupiter and Mars is our world.

Cristina Mittermeier, president and co-founder of Sea Legacy, voices the game’s introduction. As she narrates the titular dolphins, she also describes the horrors of the modern world. These submerged cities aren’t difficult to get lost in or imagine as reality. Mittermeier’s voice isn’t paying lip service to a metaphorical intention, though, as members of Sea Legacy and the Ocean Foundation consulted on the game’s development to ensure a setting as close to ours as possible.

Set in a not-so-distant future, Jupiter and Mars follows two creatures swept up in an epic quest beyond their understanding. Through mostly wordless interactions and cryptic exploration, players piece together the story of a dying planet. This kind of post-apocalyptic tale isn’t new for games, but the deep roots in tangible iconography certainly help. Final Fantasy VII deals with the end of the world. But even there, Terra is fictional, a metaphorical stand-in mirroring what may or may not be happening on Earth.

Tigertron’s message is much more direct: Everything we’re putting into our oceans is not going away, and soon enough, it may be too much.

That the entire game is also playable in virtual reality also adds an immersive layer to the urgent message. I played through most of my experience using the PSVR headset, and it enhanced my understanding of the intricately detailed world. The trash bottles that floated past my head became painfully obtrusive, and murky, polluted waters were even more eerie. Accompanied by an empty, echoing soundscape, I often felt like I was at the bottom of the ocean.

A deliberate, environmentally conscious message makes for a striking opening. With a distinct, polygonal art style and inventive creature design, every locale is consistently engaging. Most of the game consists of traversing diverse biomes to solve puzzles and find lost or trapped sea life.

To riff on a recently popularized term, I’d call Jupiter and Mars a “swimming simulator.” It does not feature any traditional kind of combat system. With an emphasis on exploration and free-roaming adventure, gameplay is often limited to just a few options. Echolocation is the most essential feature, emitting a ring that illuminates an entire area. You’ll use this frequently, as collectibles and secret paths are often hidden in hard-to-reach spots. Creatures will chatter or shake when pinged, leading you along to your next objective.

Though you view the world through Jupiter’s perspective, Mars is the more useful of the pair. You can prompt him to smash into objects like rocks and chests, clearing paths and uncovering treasures. Along the way, you’ll earn a series of upgraded abilities that make traversal easier as well as more exciting.

Outside of VR, the dolphins control smoothly; there’s a slick sense of control to gliding around freely in the open ocean. But once you put the headset on, that process gets more complicated. You can elect to guide movement with the turn of your head, or snap your character around with the press of a button. Looking around to move often feels the best, and when it works, it’s remarkable. Getting into the groove of moving like a dolphin felt great, but there were often road bumps that dampened my experience.

For one, a great deal of tight corridors and passageways make it easy to get stuck or clip into walls. I found myself turned around, unable to move, and wriggling helplessly. After a few seconds, I would be straightened out, but in virtual reality, that can be extremely disorienting.

Still, Jupiter and Mars is a wonderful experience. It’s not a perfect game, but the earnest ambitions overwhelmingly outweigh any technical issues. In the latter half, the story takes some surprising twists that open up this not-so-fictional world to some fascinating commentary. Exploration also gets decidedly tougher, with manmade machines posing a serious threat around certain areas.

Almost every element of this game ties back to the core themes, from object placement to environmental detail. The art design features delightful colors that might has well have been ripped right out of a game like Tetris Effect. Another highlight is the score, which varies from foreboding ambience to triumphant joy.

I found Jupiter and Mars to be a thrilling and thoughtful experience. It clearly communicates an important message and manages to be equally fun and charming. For the approximately five hours it took to reach the end credits, I was absorbed by impressive visuals and a weighty narrative. I came away with complicated feelings, and I can tell that was intentional. Tigertron set out to do quite a lot with this project, but in terms crafting of a moving, memorable game about the world we live in, Jupiter and Mars is swimming in success.

Jupiter and Mars is available now for PlayStation 4. This review was written based on a copy of the game provided by the publisher.