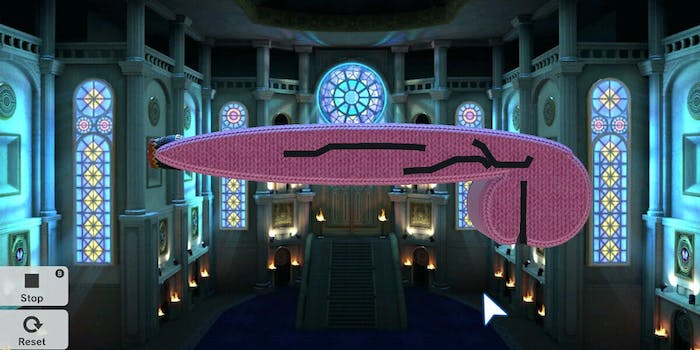 A new update to the wildly-popular Super Smash Bros. Ultimate has led to an influx of penises after users were given the ability to create their own game stages.

After the release of the 3.0 update Wednesday, users, perhaps unsurprisingly, began to harness the game’s new stage builder to draw dicks. But it wasn’t until Twitter user Skykin noted that Nintendo had made attempts to code away such dick-building abilities that the phenomenon truly began to take shape.

“Stage Builder has a function that prevents you from drawing certain shapes,” Skykin said. “Those shapes include penises. Someone on the Smash Bros. development team was paid to code and create Penis Detection Software.”

Taking the statement as a challenge, users began to flood Skykin’s mentions with examples of the very dick-shaped stages Nintendo had supposedly worked so hard to prevent.

Most of the dick stages were basic and crude.

Others offered slightly more and even too much detail.

But some went above and beyond the simple dick theme, opting to create entire sex scenes within the game.

The dick on this stage moves btw

Not even Mario himself was safe from the deluge of dick drawing.

Skykin, seemingly unamused by the barrage of phallic imagery flooding his page, quickly conceded that the game’s detection mechanism had clearly failed.

“Ok I get it the detection is flawed, please stop filling my notifis with dick pics drawn in stage builder,” Skykin tweeted.

ok I get it the detection is flawed, please stop filling my notifis with dick pics drawn in stage builder

Some users did report having their stages removed.

The dick fiasco is reminiscent of a similar situation that unfolded with Lego Universe. According to developer Megan Fox, Lego was forced to shut down the game in 2012, just two years after its release, because it could not get rid of dicks.

“The moderation costs of Lego Universe were a big issue in general. They wanted a creative building MMO with a promise of zero penises seen,” Fox said in a tweet at the time.

But in the end, the dicks prevailed.