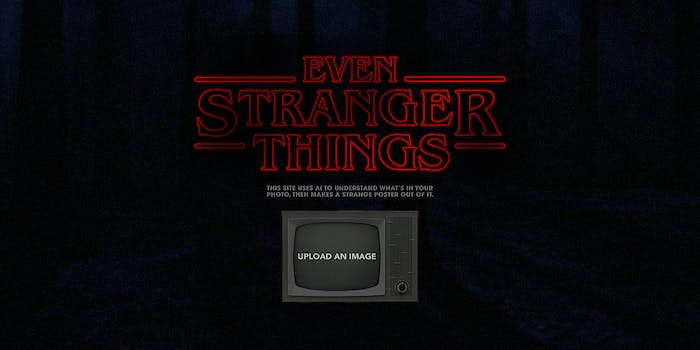 Screengrab via Even Stranger Things

It's about to get warped.

In the weeks after its debut on Netflix, Stranger Things became a breakout hit as fans embraced the characters, the nostalgic ’80s allusions, the soundtrack, and even the show’s lettering. With season 2 just days away, you can now make your own Stranger poster.

Created by web developer and designer David Arcus, Even Stranger Things allows you to upload photos to create a Stranger Things-style poster of your own. AI will help determine what to title the photo, resulting in photos that might be a bit… strange.

For instance, here’s what came out when I uploaded a photo of myself to the site. Which, fair.

It also works on pop culture, public figures, and items, proving that, while many of them might not make any sense, they’re still amusing.

It’s important to note that not every photo works. If the AI can’t register it, the TV screen will get caught in a static loop straight from the Upside Down.