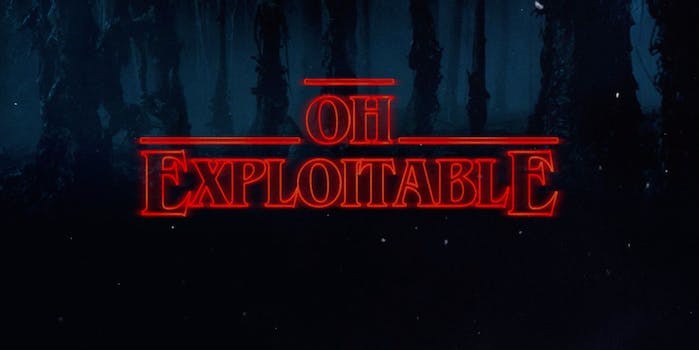 Photo via Make It Stranger

Type anything you want in the ‘Stranger Things’ title font

One of the most compelling things about Netflix‘s ’80s-throwback horror series Stranger Things was its consistent retro aesthetic, right down to the use of ITC Benguiat as the title font. And now there’s a generator that lets you replace the Stranger Things logo with the words of your choice.

And people are definitely doing that, posting various takes on what constitutes a horror show:

Of course, the realest horror program of all is one’s Twitter mentions (a.k.a. “menchies.”)

Many still have questions, though.

These are all very valid points, but it’s pretty hard to fuck up this meme. It’s like this: You go to makeitstranger.com. You type in something scary. Spaces don’t work, so use underscores if necessary.

Make It Stranger was created by design firm Nelson Cash, whose Sarah Gless wrote a blog post praising the show’s typography. As of last night, the site had received 11,000 submissions, and that’s before it really caught on.

But here’s the best one. The one that will make you say “I wish I had thought of it. It makes so much sense. It works on every level.”