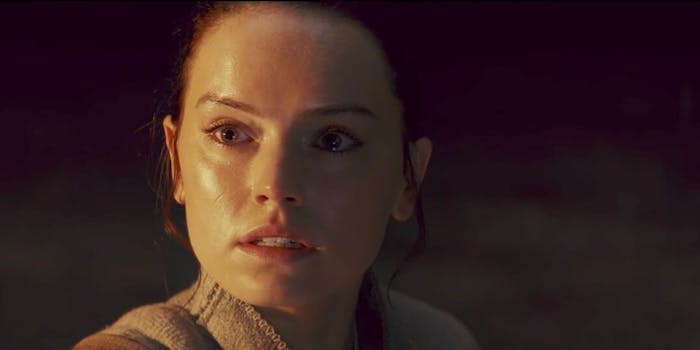 The latest trailer for Star Wars: The Last Jedi debuted during Monday Night Football as it revealed even more footage and some plot for the highly anticipated movie.

Teases released on social media during the past couple days revealed we’d see plenty of Rey training under the tutelage of Luke Skywalker—along with a look at how the final scene in The Force Awakens played out—as he said, “Breathe. Just breathe.” And although director Rian Johnson gave his vote of confidence on the trailer to fans on Twitter, he recommended skipping it if “you want to come in clean.”

And the new trailer reveals quite a bit. The parallels between Rey and Kylo Ren are more apparent—to the point where it scares Luke. The Resistance and the First Order are at each other’s throats once again to the point where it appears that mother and son sense each other on opposite sides of the battle field. Finn finds himself facing an old commander while Chewbacca made a new friend. And is our hero tempted to join forces with the man who killed her father figure?

Fans also got their first look at the new poster for The Last Jedi, which Lucasfilm released on social media shortly before the trailer debuted.

Check out the brand new poster for Star Wars: #TheLastJedi and watch the trailer tonight. pic.twitter.com/A4UGpYqoeW

Star Wars: The Last Jedi will arrive in theaters Dec. 15.