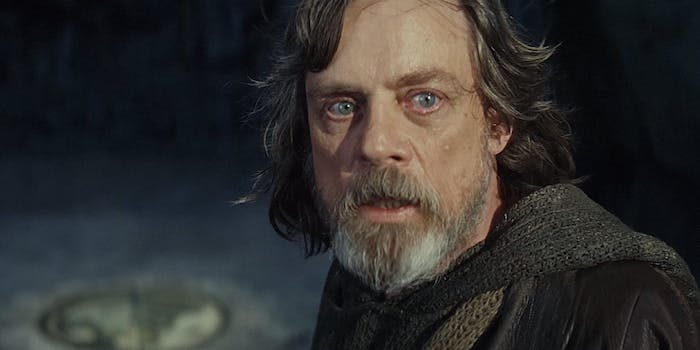 What you missed in the latest ‘Star Wars: The Last Jedi’ trailer

There's more to the trailer than meets the eye.

Lucasfilm dropped the latest trailer for Star Wars: The Last Jedi during Monday Night Football, and fans have been rewatching and dissecting it see what clues it holds about the upcoming film.

If you haven’t seen it yet (or want to see it again), here’s your chance to do that. We’ll wait.

At the very least, there are a couple instances of visual misdirection, a common occurrence that lets trailers show parts of the movie without spoiling it. Trailers sometimes suggest one thing, while something completely different happens in the movie. Famously, The Force Awakens trailer suggested that Finn would be the one to take up Luke Skywalker’s lightsaber and mantle, and to be sure, he did use that lightsaber in a fight against Kylo Ren. But it was ultimately Rey who had control of the Force.

So what tricks is the latest Last Jedi trailer trying to pull? What does it all mean? Let’s dive in.

The parallels of Ben Solo and Rey

“When I found you, I saw raw, untamed power,” Supreme Leader Snoke says in the beginning of the trailer. “And beyond that, something truly special.”

At first, given the visuals, we presume Snoke is talking about Kylo Ren. He seduced the unruly young man (and son of Leia and Han Solo) with the power of the dark side, and Kylo Ren is probably at a low point after being defeated by an untrained Rey at the end of The Force Awakens. Not only that, he wears a mark of that humiliation on his face whenever he’s not donning his mask.

Curiously enough, as soon as Snoke says “something truly special,” the footage cuts to Rey as she turns on her lightsaber on the remote planet Ahch-To, where she landed at the end of The Force Awakens.

Is it possible that Snoke could be talking about Rey? He must be curious about the scavenger who was able to not only fend off Kylo Ren’s attack on her mind, but turn his own powers against him with no training at all. And we know that later in the trailer Rey and Snoke do meet in a shot where he appears to be attacking her.

But if you accept that Snoke is talking about Rey, it’s not the only parallel between the two talented, Force-sensitive fighters. Luke Skywalker alludes to something even more dramatic.

What is Luke so afraid of?

So that shot from the first trailer of rocks rising around Rey? That’s probably not just a cool meditation trick if the look on Luke’s face is any indication.

“I’ve seen this raw strength only once before,” Luke said. “It didn’t scare me enough then. It does now.”

The trailer suggests that he’s referring to his nephew Ben Solo (who later became Kylo Ren), who burned down his Jedi school and killed all of his fellow students. We even see a bit more of that flashback—which we could potentially see in full in the film—as Luke uses his robotic hand to escape the burning rubble. Even if Ben perpetrated the massacre himself, Luke might feel responsible and leery of taking on another charge so similar to his biggest failure.

Does Luke worry that Rey might turn to the dark side of the Force like Ben did? It’s not clear, but training will not be an easy journey for either of them.

What’s Finn doing back with the First Order?

In The Force Awakens, Finn did what no other First Order stormtrooper had done before: escape the years of training and brainwashing in the order’s service. But would he abandon his new family so quickly?

His apparent return to the First Order may be part of the secret mission he goes on with Rose Tico, a Resistance maintenance worker. He knows the First Order better than anyone, considering how much time he spent in a stormtrooper uniform. Unfortunately, he finds himself face-to-face with his former commander, Captain Phasma, who is none too pleased with the traitor who threw her down a garbage shoot. At the very least, Phasma (played by Game of Thrones‘ Gwendoline Christie) will have much more to do this time around—and we hope we see more of her.

Will the movie pit mother and son against each other?

The Force Awakens showed us plenty about how Kylo Ren feels about his father, Han Solo, but what it left completely out of the picture is how he feels about his mother, Leia Organa.

Chances are his feelings are just as complicated. Leia’s the link between him and Darth Vader, but she’s also the person who’s leading the effort to bring down everything he’s worked for. At one point in the trailer, it appears that Kylo Ren is struggling with the possibility of destroying his mother’s ship. As was the case with Luke in the original trilogy and Han in The Force Awakens, she appears to sense him.

But are those two moments happening at the same time? It could potentially be a misdirect, and if mother and son reunite, this movie it may have emotional gravity beyond a Force connection on opposite sides of a space battle.

What should we take from that final moment?

The final moment of the trailer—in which Kylo Ren appears to reach out to Rey—might be the movie testing Rey’s resolve. She didn’t necessarily set out to become a Jedi, but she’s training like one under Luke. So it’s curious that she appears to be conversing with someone who would want to lure her turn to the dark side.

“I need someone to show me my place in all this,” she said as Kylo Ren looks on and holds out his hand.

Out of everything in the trailer, this is the scene most fans are calling out as a misdirect. It’s likely that Kylo Ren is holding his hand out to someone else or that Rey is talking to someone else. (For what it’s worth, her collar looks to belong to the vest she wears at the end of Force Awakens and in parts of The Last Jedi more so than the updated version of her Jakku outfit when she’s being tortured by Snoke.) The scene could also be a vision similar to the one Luke had on Dagobah. If she and Kylo Ren are indeed joining forces as the scene suggests, it might not be as straightforward as her going dark; they could be teaming up for a very specific task.