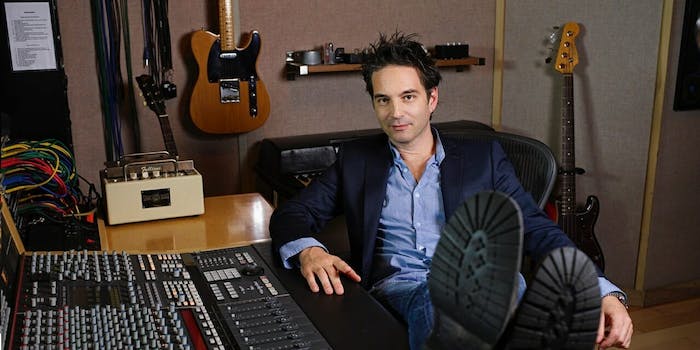 Behind the music of ‘Star Trek: Discovery’ with composer Jeff Russo

Each Star Trek era has its own distinctive sound, from the vintage orchestral music of the Original Series to the mystifyingly horrible theme song for Star Trek: Enterprise. The franchise also has a penchant for including in-universe music like Klingon opera and Spock’s Vulcan lyre, and Discovery will soon introduce a contribution of its own: Kasseelian opera.

We spoke to Russo about the unusual task of composing alien music, why he avoided giving the Klingons a “bad guy” theme, and how Discovery calls back to 1960s Trek while forging ahead with new ideas.

The Daily Dot: The theme music was the first thing we heard from Discovery, and it calls back to the Original Series in this really beautiful, nostalgic way. Could you tell me how you took inspiration from the Original Series theme? And did you look back to any other Star Trek series as well?

Jeff Russo: I didn’t really look back to any other Star Trek series. When I first started thinking about what the theme was gonna be, I thought, how can I connect this to the past? I needed to connect us to where we’d been, and also set us on a course of where we’re going.

I thought the most effective way of doing that is to call back to [Alexander] Courage’s fanfare and to start the theme out with that same feeling that you get with the Original Series. And then how to take that into new territory. One of the reasons why I put that fanfare at the end of the theme, as opposed to the beginning where it appears in the original, is because our series takes place prior to the Original Series. It’s kind of fun to leave us with that, knowing that eventually, the time period will get us to there.

Do you find you have a different attitude when composing music for a sci-fi show, contrasting with more traditional dramas? Or is it more a case of Star Trek having a specific sound in itself?

I think that the idea for me was, how do I write the kind of music that I write, and put it in the vernacular of what Star Trek is? I tend to write from an emotional place, and when we talked about writing the score for this incarnation of the show, we talked about telling the story from a more connected and grounded emotional place.

You know, the story is told through the eyes of Michael Burnham and how she relates to people, and how she’s going to operate in the world. So yes, Star Trek has a sound, and it’s very apparent when you add those horns and you add the swashbuckling element to it. But I did try and stay true to having it be a more forward-thinking score. I didn’t want it to sound retro… I wanted to have that as a jumping-off point and take it to somewhere new.

One of the things I found interesting about this series is the effort that went into the Klingon worldbuilding. There really is this aesthetic difference between the Klingon scenes, and scenes on Federation ships. How did you create the Klingon music for that?

One of the things we talked about with the Klingons is despite the fact that Starfleet is at war with the Klingons, I needed to approach the Klingons from the perspective of, you know, not necessarily just playing them as the bad guys. Because to themselves within their own group, they are in the right, they’re protecting themselves, they want to live their own lives. And they have interpersonal relationships that I needed to underscore.

When you tell people what you’re working on at the moment, do they have a different reaction when they hear it’s Star Trek? Obviously, fans have such intense feelings, and people have a much more specific idea of what they want to hear than with, say, Fargo.

Yes, I agree with that. I think some people are attached to something that’s in their mind, and they have a hard time letting that go and letting something be what it is. And a lot of people are really open to taking a story that they love, and bringing it into a new way of telling the story. So I get different reactions from different people, but mainly it’s like, “Oh my god, you’re working on Star Trek? That’s so amazing!” No matter what. You know, the idea of working on something that I’ve been a lifelong fan of is spectacular, and I think people see that.

You sourced a very specific synthesizer for the Pink Floyd-inspired sound of Legion. Did you use any unusual instruments for Star Trek?

There were a couple of ethnic instruments that I like to use for Star Trek. I used a duduk, which is a Middle-Eastern, double-reeded instrument. I tend to use a lot of ethnic flutes in Star Trek, I used this yaylı tambur, which is… of Turkish descent, I think? A stringed instrument that you bow. I’ve done a little bit of that, but I think I kept a much more traditional take on how to implement the emotional aspect of the score. The melodic content is definitely played by a more traditional orchestral element.

I know you can’t tell us much about Chapter 2, but I hear you may have composed some opera for an alien species, the Kasseelians?

Correct! That is something that I can talk about. There’s an opera—which was actually spoken about I think in episode 6.

Yeah, [Stamets and Dr. Culber] were discussing one of them being a fan of Kasseelian opera.

The moment I saw that, I had a conversation with the producers. You will definitely hear Kasseelian opera somewhere in the next five episodes. I needed to figure out what that would sound like because it could be pretty much anything, so I made it what I thought something that these particular characters would’ve been invested in.