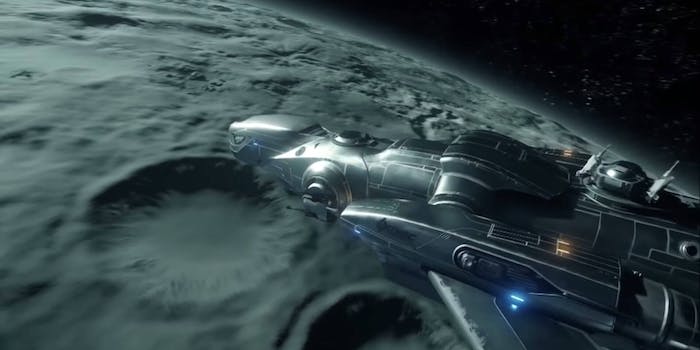 Tickets to attend the dinner were $275.

Star Citizen is a game inherently mired in controversy–from disputes between the game’s creatives to the fact that the game was originally slated for a 2014 release. Oh, and let’s not forget about the wild crowdfunding figures surrounding it (over $250 million at this point in time).

The game, which began development in 2011, has seen modular releases since 2013. But a complete package for the vast, online multiplayer space trading and combat game has yet to see the light of day.

On Saturday, Star Citizen developer Cloud Imperium Games announced, at a special dinner in Frankfurt, Germany, a new ship with a mine-laying mechanic coming to the game. It will be called Aegis Nautilus Solstice. And the price of Aegis Nautilus Solstice? $675. The price of the tickets to attend the ship’s announcement? $274.73. The minimum one would have to spend on Star Citizen to gain special access to buy a ticket? $1000. In total, a Star Citizen player would have to spend $1949.73 at the very least to attend the dinner and purchase the yet-to-be-released in-game spaceship with a yet-to-be-implemented feature in a game that still doesn’t have a full release.

In 2016, Wired awarded Star Citizen a spot on its list of “Vaporware Games’ due to the game’s ever-changing release window. Wired cited the ever-growing ambitions of the game’s creators as a possible reason the game may never be completed entirely. Similarly, Massively OP awarded Star Citizen it’s not so prestigious “Most Likely To Flop” Award in both 2016 and 2017.

As I myself have not spent $1000 on Star Citizen, the details of this announcement dinner and new ship were revealed through a ResetEra thread. There was even a paywall preventing non-‘Chairman’s Club’ level backers from even viewing the purchase page for the event’s tickets. The announcement also specified that a non-limited edition version of the ship would be available to purchase for all Star Citizen players for $810.