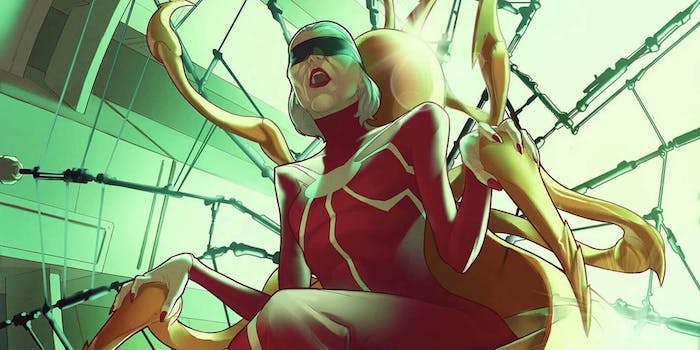 This obscure Marvel character is a blind, paralyzed old woman with clairvoyant powers.

Yet another obscure Marvel character is getting their own spinoff: Madame Web, a clairvoyant mutant who occasionally appears as a supporting figure in Spider-Man stories.

Madame Web differs from most superhero movie protagonists in two major ways: she’s an elderly woman, and she’s disabled. Diagnosed with the neuromuscular disease myasthenia gravis, she is both blind and paralyzed, and the character’s spider-like imagery comes from the mechanical web she uses as a life support device.

Following the success of the new Spider-Man movies, including Spider-Man: Into the Spider-Verse, Sony is moving ahead with some more offbeat spinoffs. The studio only has access to Spidey-related characters from the Marvel canon, which so far has led to movies for Venom and Morbius the Living Vampire, whose film will come out next year starring Jared Leto.

According to Collider, Morbius screenwriters Matt Sazama and Burk Sharpless are working on the Madame Web script, with no director announced as of yet.

Sony also has a number of other Marvel projects reportedly in the works, including films for Black Cat, Kraven the Hunter, and the Sinister Six, but some of these scripts may not make the cut. At the moment, the only upcoming Sony/Marvel films with confirmed release dates are Venom 2 and Morbius, with a third Spider-Man movie in the works starring Tom Holland.