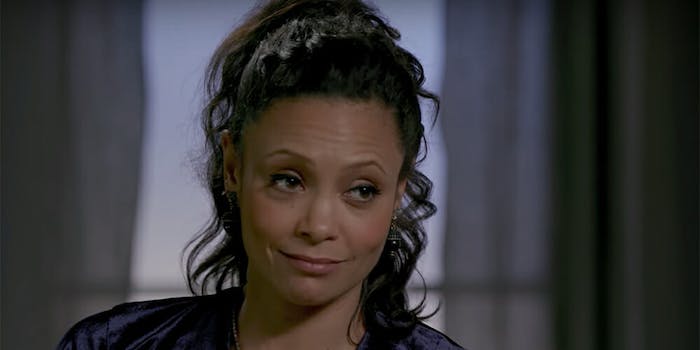 The gown features figures from her personal collection.

Solo: A Star Wars Story actress Thandie Newton walked the red carpet at the movie’s Cannes Film Festival premiere Tuesday in what might be the best Star Wars couture of all time.

Newton’s dress—a custom Vivienne Westwood piece—is embellished with figures of all the Black characters in the Star Wars universe, io9 reported. Even better: All the images are of action figures in Newton’s personal collection.

The dress includes images of Finn, Mace Windu, Captain Panaka, and Saw Gerrera action figures. There’s even a Lando Calrissian from the original trilogy. Here’s a look at the dress from a few different angles (and it’s worth zooming in).

Thandie Newton at the Cannes Film Festival wearing a dress that has black #StarWars characters on it. #Solo pic.twitter.com/tVBTPhVx7B

The gown marks Newton’s debut as Val in Solo: A Star Wars Story and as the first Black woman to have a leading role in a Star Wars film. It’s notable that there are few enough Black Star Wars characters that they fit on a dress, a statement Newton undoubtedly intended—and nailed in style.