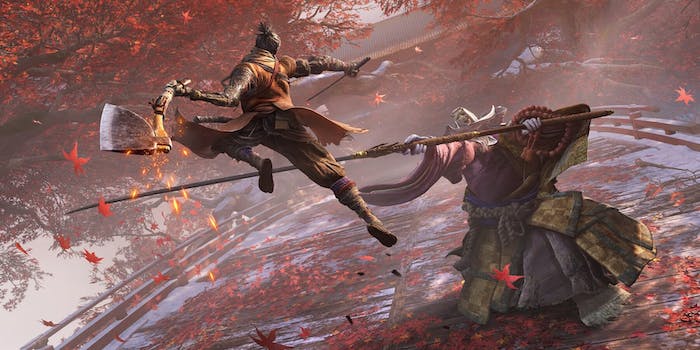 Review: ‘Sekiro: Shadows Die Twice’ is a cut above the rest

I guided my nimble shinobi through an open field and up the face of a tall cliff—hanging from edges, hugging tight corners and shimmying along cavernous heights. Infiltrating a hostile camp, I surrounded myself in tall grass, eavesdropping on enemies and executing stealthy takedowns. Even in combat, my character felt free in a way these kinds of games don’t often afford. Through jumps, rolls, and quick dashes, I was struck by the range of motion my character possessed.

All this, even before I unlocked the grappling hook.

Sekiro quickly acknowledges its heritage. And fans coming in expecting more Dark Souls will be surprised. Change in Sekiro comes to life through character actions, narrative devices, and role-playing systems. While combat may look similar to the weighty back-and-forth of Souls games, it’s much more complex.

Without proper timing, Sekiro is impossible. The game demands a patient approach to combat, rather than testing your endurance, stamina, or aggression. Thanks to the new Posture system, every enemy encounter becomes a tense duel. You can always block an incoming attack to protect yourself from damage but by waiting until just before contact, you’re able to strike at the opportune moment. Deflecting enemy blades is rewarding, turning their weak point into glowing red dot that denotes a satisfying spray of blood.

Though you can punish a tricky enemy with well-timed blows and counters, they can do the same to you. It is not enough to be stronger than your enemies; you must also be faster and smarter.

Posture adds a second meter to track for player and foe, on top of health. Constantly blocking drains Posture and makes one more susceptible to being knocked down or countered. You can push through an opponent’s block, stagger their stance, and expose a weakness. Conversely, you could choose to play defensively. By moving around an open space, you control the pace of the attack. This explicit emphasis on timing makes Sekiro‘s combat come to life like a delicate dance.

As such, the constant clashing of swords scores your adventure. Enemies will deflect your sword just as often as you dodge theirs. When going up against a new opponent, your best move is always to study their moves, watch for an opening, and strike. The game eases you into a pattern of watching for tells that an attack is coming, priming you to guard yourself. Most kills come after a successful deflection, sending the enemy reeling, and striking the glowing red indicator. This tactic is called a Deathblow, and it is essential. Deathblows can also be achieved from stealth, from high above an unsuspecting target, or following prompts on certain bosses.

Of course, not every enemy is that easy to get rid of. Tougher targets sometimes require more than one Deathblow to dispatch. Many of these enemies also use different tactics than traditional samurai or swordsmen, electing for drawn-out windups or sweeping thrust maneuvers. Scenarios like this require more thought, as blocking won’t be as reliable. Here, Sekiro encourages speed, mobility, and improvisation.

Thanks to the wide variety of tools the One-Armed Wolf finds on his quest, this strategy is always evolving. By upgrading your prosthetic limb, you can learn burning attacks or pull out a heavy axe in the thick of battle. There’s also a traditional skill tree that unlocks new combos with helpful bonuses. As you progress through the story, pairing combat arts with upgraded tools opens the door to new possibilities.

If there’s a constant throughline to Sekrio‘s gameplay, it is death. This should come as no surprise considering who developed the game, but thankfully, this experience isn’t as brutal as Dark Souls can be. You aren’t chasing after your corpse to claim your lost souls here, but every failure cuts your gains in half. The opportunity to save your progress at a Sculptor’s Idol comes rarely. This brief respite also offers the chance to cash in skill points, buy consumable weapons, and travel freely around the world. But doing so restores any enemies you may have already slain. This should be a familiar mechanic to fans of From Software’s previous titles, as not much as changed. But Sekiro’s main hub is home to one fantastic addition in the form of a character named Hanbei the Undying.

To properly master combat, players can train freely with Hanbei after warping to his Dilapidated Temple. These tutorials walk you through basic parry moves as well as introducing new moves as you unlock them. I spent a great deal of time working on timing deflections, counters, and Deathblows. Having this helpful feature available to call on ensured I never lost hope, even after losing to the same boss fight more than a dozen times in a row.

Though Sekiro can be difficult, it never feels punishing. The presence of a resurrection mechanic makes foolish mistakes or surprising hazards less dramatic. You never need to stress about pouring upgrades into the wrong stat and ruining your character’s balance. Even if these systems are less demanding than they are in Dark Souls, moment-to-moment combat is more intense and engaging.

The Souls series has made a significant impact on game design in the near-decade it has been around. It’s almost impossible to count the number of titles that have picked up on the choices From Software made in the past. Many games can claim they feel like Dark Souls—and that’s why it is so wonderful that Sekiro doesn’t. This adventure marks a maturation in the formula that fans have come to love. Everything new in Sekiro is achieved with graceful triumph, demonstrating how willing From Software is to experiment with new ideas and proving it to be one of the greatest modern developers.

Sekiro: Shadows Die Twice is available now on PC, PS4, and Xbox One. This review was based on a PS4 version of the game provided by the publisher.