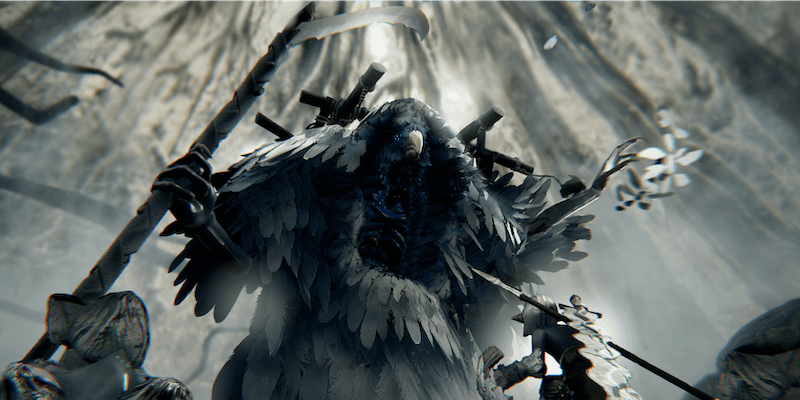 Sinner: Sacrifice for Redemption is dark and soulless

This indie adventure blurs the line between inspiration and exploitation.

If your first impression of Sinner: Sacrifice for Redemption draws comparison to Dark Souls, you may have taken the game’s bait. But hidden within is an experience that adds little to an established legacy.

Like it or not, action games have been indelibly scarred by Dark Souls. From Software’s groundbreaking formula has now been the foundation of many major releases. In tense combat encounters to risk-and-reward exploration mechanics, the echoes of Souls’ design is inextricably tied to most modern adventures.

This “Souls-like” genre is a contentious signifier among players. Does a game qualify if it’s deemed “too hard” by players, or does it require tangible proof of the titular franchise’s brutally hard-to-master mechanics? Should the limit of Dark Souls’ influence be intricate combat? Or are the ways story and lore are communicated worthy of similar adulation?

While debates around how much of this label is actually attributable to Dark Souls rages on, dozens of publishers and development studios have run with the moniker. Just perusing the “Souls-like” tag on Steam brings up a swath of games that don’t seem to share any consistently discernible features. Across various visual styles, settings, and even the most basic premise—all point to Dark Souls as a vague descriptor.

But Sinner: Sacrifice for Redemption is much more specific in its inspiration. Looking at a screenshot of Dark Star studio’s latest effort, it is impossible not to feel the intentional homage to the iconic Souls series. Unfortunately, the execution falls short.

In Sinner, players control Adam, a deceased medieval warrior who enters a purgatory-like state to face his demons—literally. The hero needs to vanquish a series of creatures representing his transgressions from his life of wrongdoing.

Specific command prompts introduce themselves as you travel through desolate corridors. After slashing through a few waves of faceless, spectral enemies, Sinner reveals the boss rush concept at its core. Rather than bracing your way through an unforgiving world, this game trims the fat and tasks you with conquering seven ghoulish enemies.

Seven bosses, seven deadly sins. Sinner’s premise is a simple distillation of the traditional adventure genre, but the brooding environments and genuinely grotesque character design elevate any straightforward set-dressing. Stripping the adventure of any exploration and cutting straight to the sadistic boss encounters also removes any tension of progress—and fundamentally misunderstands what makes a game like Dark Souls so compelling.

For Sinner’s hyper-focused critical path to work, it requires impressive combat. Vanquishing intimidating foes won’t be satisfying if either character feels overpowered. While moment-to-moment gameplay works well enough, clunky controls often intrude on what should be thrilling encounters. Too many times, my swing was imprecise and overtaken by an un-telegraphed attack. Now, that’s not to say the bosses are unfair. Each fight features a different set of tough patterns and strategies to learn, but none are wholly impossible. And thanks to their open ordering, you can always table a frustrating fight for another day.

One mechanic that sets Sinner apart is the self-punishing sacrifice taken before each fight. When approaching a boss portal, Adam must first enervate himself in some way. These sacrifices often pair with the upcoming encounter’s conceit. For example, a quick boss fight requiring lots of well-timed dodging also cuts the player’s stamina significantly. Adding a Mega Man-inspired approach, you’ll need to calculate which bonuses you can live without, as you will be permanently burdened moving forward if you win.

This distinction is important to Sinner’s progression, as well as understanding why there’s no pleasure in its intense encounters. Playing through Sinner: Sacrifice for Redemption is grueling and never lets up. Pushing yourself up against the same enemy over and over until you win reveals nothing new about the world: only the looming shadow of the other enemies you have yet to conquer. Compare this to the excellent execution in this year’s Dead Cells.

Similarly tense action RPGs often offer areas to practice combat, grind levels, and explore hidden secrets to flesh out and break up the experience. Sinner seems to expect that players will enjoy the lack of context and invent their own rewards for overcoming the sadistic challenges laid out before them.

It’s easy to imagine that some players might latch on to the premise of Sinner. In the era of  escalating challenges and chest-thumping livestreams, this game could be seen as a true test of skill. But in solely offering the peaks of a game like Dark Souls, this experience lacks an opportunity to invest in meaningful immersion and fails to carve out its own place in a crowded genre. While the bosses are truly wonderful monstrosities to behold, the most frightening thing presented in Sinner is a game that’s damned to live with few original ideas.

Sinner: Sacrifice for Redemption will be released for PS4, Switch, and Xbox One on Oct. 18. This review was written based on a Nintendo Switch version of the game provided by the publisher.