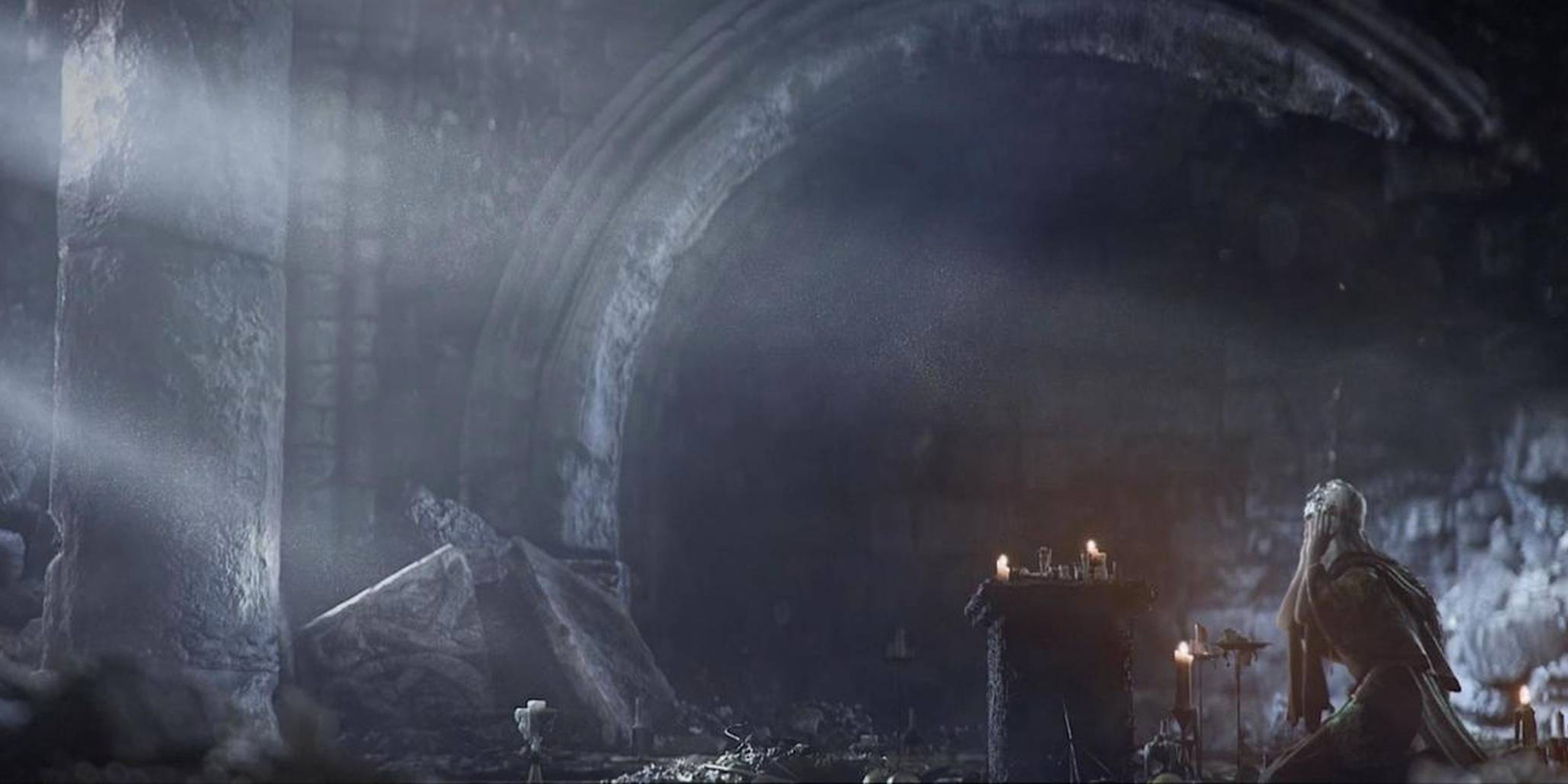 It hurts so good.

Like all of its franchise predecessors, the road to salvation in Dark Souls III is paved with a hundred deaths.

This masochism is just part of the cycle of despair, in which players apply the lessons learned through their own myriad failures. Some deaths are more careless than others, some more preventable. That’s the beauty of the Souls games; their trial-and-error progression directly link, however subtly, to the equally punishing, equally engrossing 8-bit games on the NES.

Dark Souls III adeptly balances familiar designs and gameplay that the series is known for with new levels of combat depth. It features its share of enhancements and refinements that make it an effective “gateway” installment to the franchise. Creating a sequel that appeals to hardcore fans and newcomers in equal measure is harder than it looks, but with Dark Souls III, From Software makes it look easy. 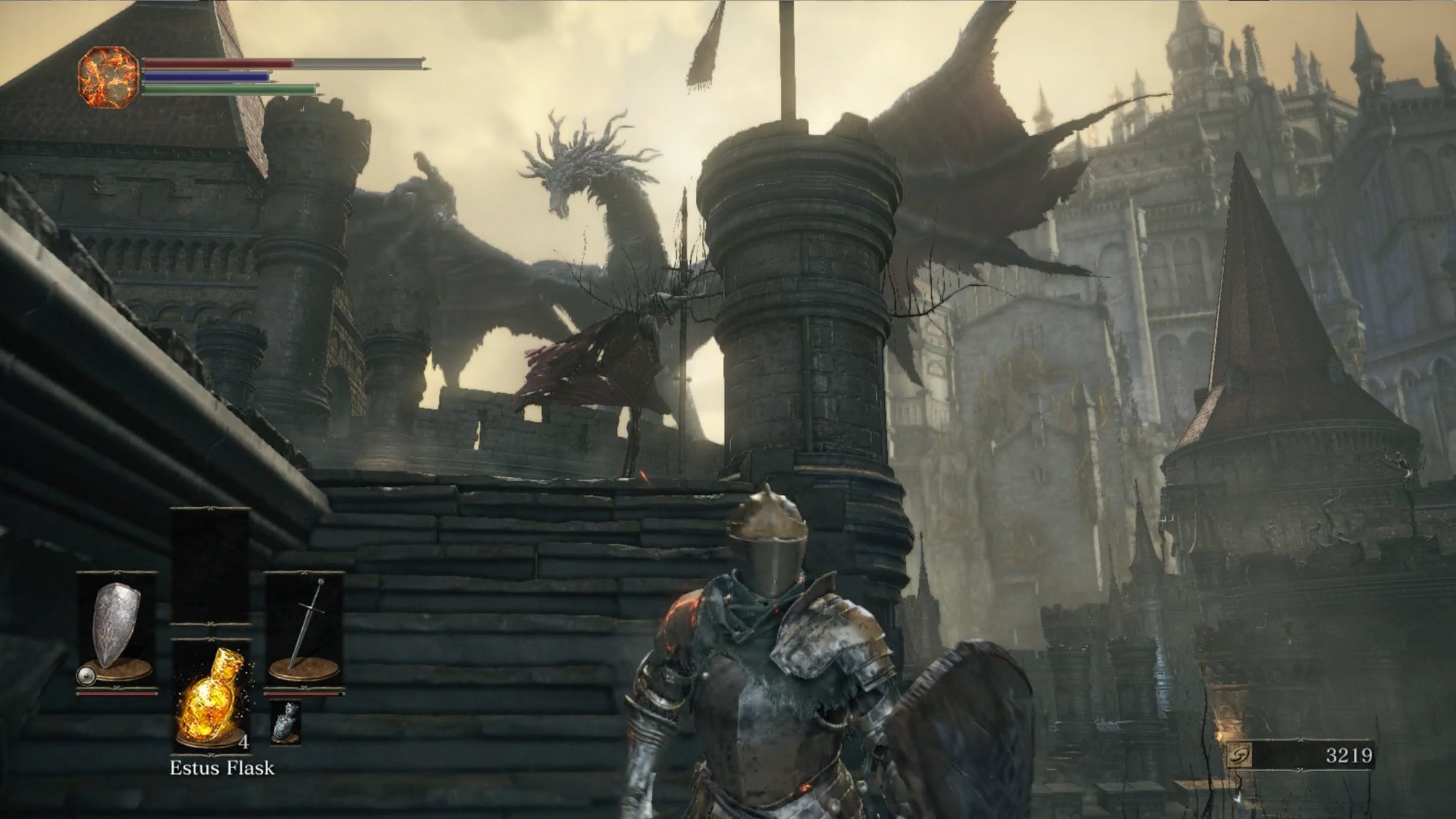 In an entertainment field where it seems like “easy to learn, hard to master” products are released practically on a weekly basis, it’s refreshing when there’s a game like Dark Souls III where, for novices, the learning curve is steep and the mastery curve is just slightly steeper. 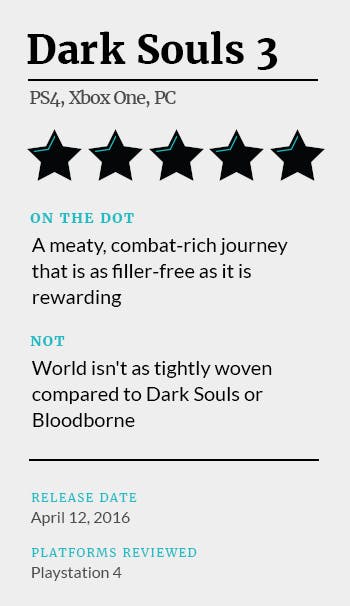 Like its predecessors, it is ripe for flawless playthrough videos while also being newcomer-friendly, thanks to the level grinding. Indeed, there were a couple bosses that I encountered who were initially difficult, but didn’t seem so tough after a bump of a few levels. Exceptions apply to the last two bosses, who are some of the hardest enemies in the franchise. The skills that I developed throughout the series weren’t enough to take them on during my first, second, or even my 10th attempt. Both of them necessitated extended periods of level grinding and weapon upgrades.

Character progression and advancement in this franchise feels like a classic JRPG with expert level complexities. It’s not unusual to be overcome with indecision when choosing what attribute to upgrade next. That’s because upgrading an attribute does not necessarily improve the same stats with every subsequent upgrade. Then there’s the complementary nature of the weapon crafting in relation to the character upgrades. It shows impressive depth when a character’s impact on an enemy can be greatly limited if his equipped gear has not been upgraded for a while, no matter how high the character’s level. 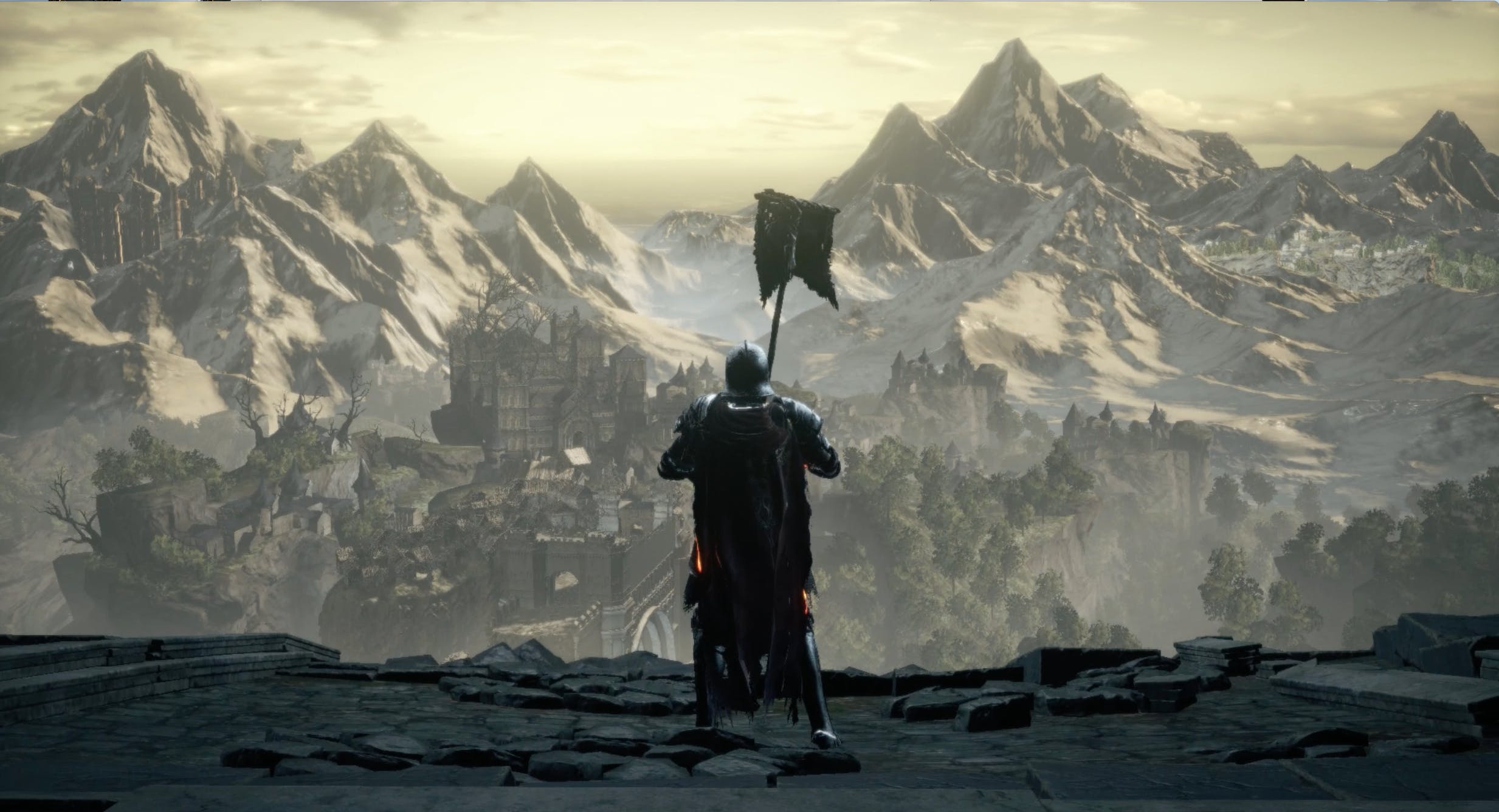 Speaking of depth, the trademark combat (and the brutality that ensues) has never felt better. Like a melee version of a quick-draw duel between cowboys, beating your enemy with the first hit of a combo never gets old, especially when you have enough stamina to kill the enemy before it even has a chance to touch you. There are of course other signature moves from the series in Dark Souls III, like deadly backstabs, stuns from shield parries, and roll dodges. The newly implemented Weapon Arts positively improve an already deep and excellent battle system. The only shortcoming is that there aren’t any overt incentives to learn and practice these new move sets. You’re introduced to them once in the tutorial, and you can potentially forget that these new options are there. But for those of us who remember to consistently use these deadly moves as part of our minute-by-minute repertoire, the results are incredibly satisfying.

You’ll be all the more grateful for these deadly tools since Dark Souls III’s enemies are as lethal and ruthless as any you’ll find in the franchise. As always, defeating bosses works like a puzzle that also demands high dexterity. In many ways, it’s the non-bosses who stand out in this sequel, many of whom fight with the same degree of vigor and intensity as the bosses. Many of these “lesser” enemies could be bosses in equally dark games like Bayonetta and Devil May Cry. 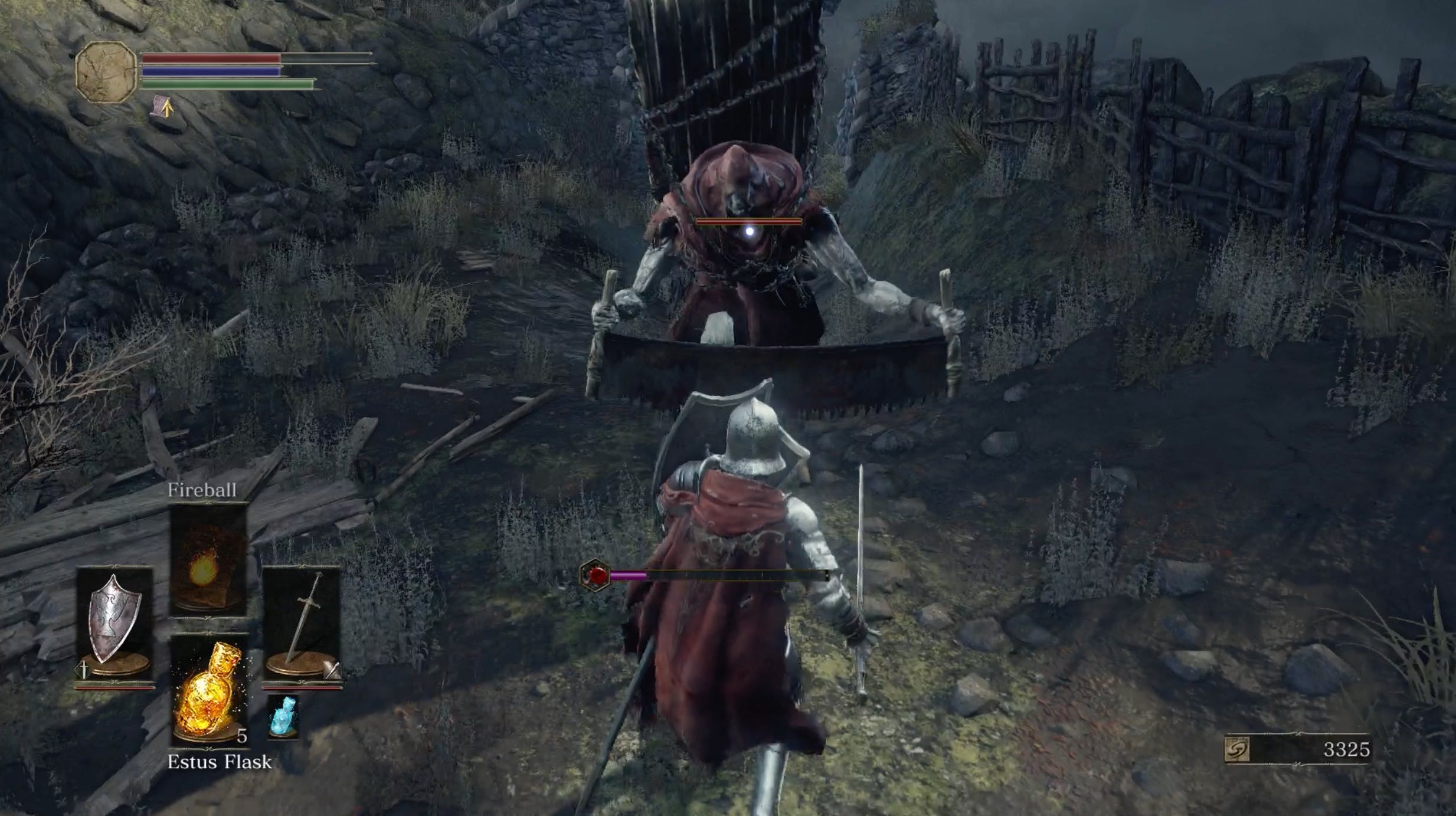 Dark Souls has gained a large and devoted legion of followers due to the franchise’s legendary difficulty—but that’s just one of the Souls games’ achievements. Equally commendable is how fans have engrossed themselves in the series’ cryptic lore. Dark Souls III continues this tradition, from the captivating and mysterious opening cutscene right down to a two-paragraph description of a broken sword that most players will never equip. It never feels like From Software creates mystery for the sake of it. It was a bit surprising, though, that many of the item descriptions and uses are plainly explained in Dark Souls III. Researching these nuggets of lore through message boards and discussions with friends adds dimension to the Souls games’ social appeal, which often takes a back seat to the series’ player vs. player.

Another trademark of the Souls games are their intricate and exquisite level designs. Smart development studios know how to lay out and plan excellently crafted individual levels, often encapsulated in individual chapters or episodes. From Software transcends this by designing and melding their individual areas into a single, often labyrinthine world. And they’re carefully gate-kept, creating a specific (while sometimes flexible) sequence of areas that form the player’s journey. Opening one side of a gate that was previously locked on the opposite side is a Souls tradition and the immense satisfaction of unlocking one to create a shortcut never gets old.

Such moments of gratification are present in Dark Souls III, but nowhere near to the degrees of complexity as the prior games. The worlds of the original Dark Souls and Bloodborne were tightly and brilliantly designed. You could explore a new area 40 hours into your playthrough only to realize that it was connected to the game’s first area by a single door. Dark Souls II was more of a web, where the hub of Majula featured multiple branches leading to different areas, many of which were gate kept by a single item. Dark Souls III is more linear by comparison but its a minor shortcoming. Very few areas are connected to multiple areas, although the majority of individual locales still offer the gratification of shortcut discovery. Thankfully, this does not diminish the motivation to explore in Dark Souls III. That’s because the act of unearthing some place or something can take many forms. It can be as simple taking the unbeaten path or taking a leap of faith off a cliff to a ledge that’s only reachable by jumping. You know a game is well designed when the drive to beat it is as strong as the drive to investigate every nook and cranny.

The compulsion to investigate every space from every camera angle is not only done in the name of exploration, but also caution. It wouldn’t be a Souls game without foes dropping on you from the ceiling, behind some boxes, or around a corner. Progressing one step at a time shows respect to From Software and the studio’s penchant for placing enemies in opportune spots. The undead can get the jump on you (literally) as much as you can get the jump on them. It’s because of this reputation for scaring players that it’s not wrong to classify this series as survival horror.

The journey throughout this woven world has its share of spectacle, while also mixing familiar Souls environment aesthetics with new ones. Like a well-designed record album playlist, the order in which you first visit each area feels like a lot of thought went into it. The dark poisonous swamp of Farron Keep is fittingly overbearing with dread and hardship, as with other swamp-like locales in other Souls games. Conversely, the Undead Settlement, with its tilted landscapes and scattering of mini villages is gorgeous in its rural decay. The villagers of the settlement look like Bloodborne enemies inhabiting the cursed village of Resident Evil 4. 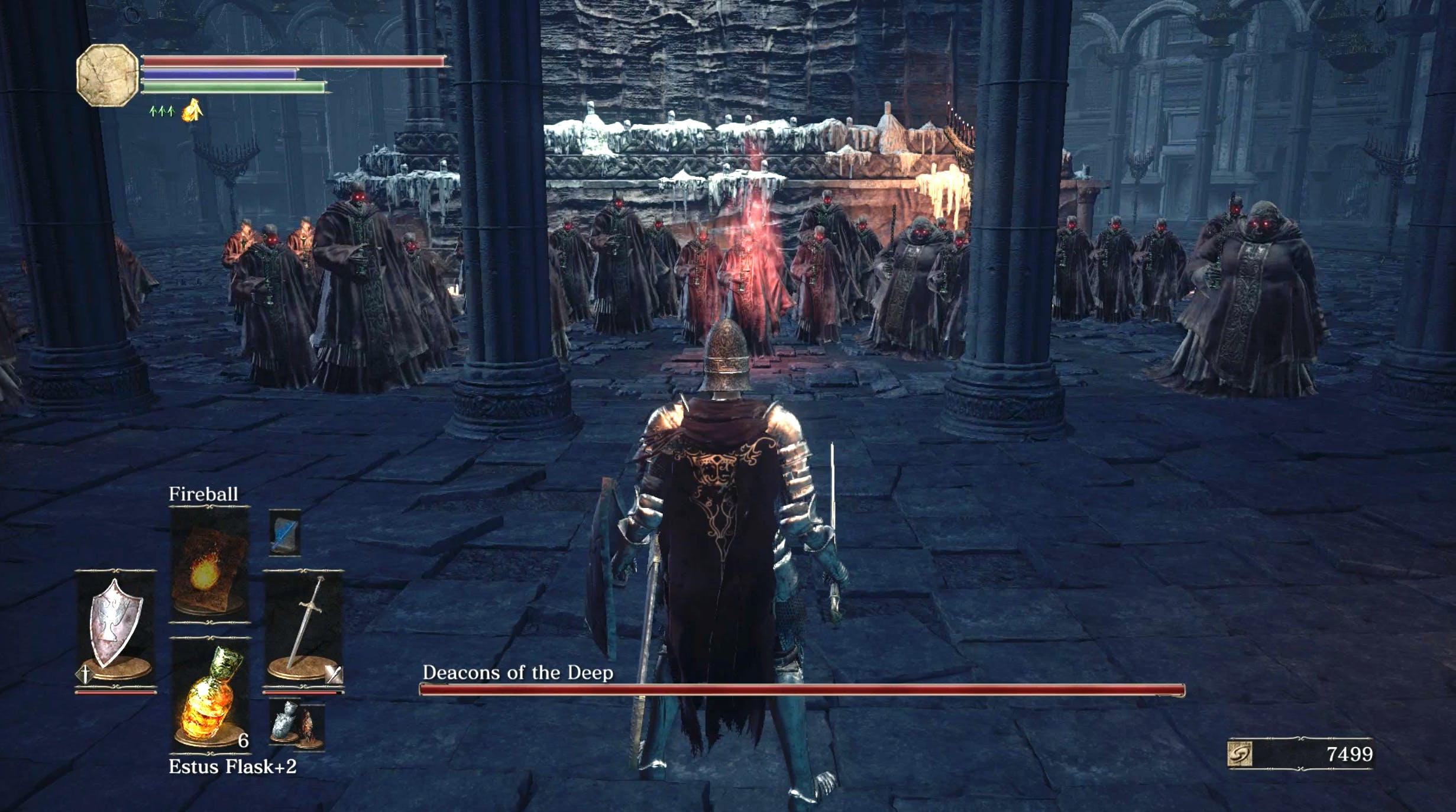 I sighed upon entering the catacombs, especially because it was the next area after clearing Farron Keep. Swamps and catacombs are not exactly original settings, so it was of some relief that the critical path of the catacombs was concise, but still a worthy challenge. Enduring the challenges of the catacombs made the reveal of the next area, Irithyll of the Boreal Valley, all the more dramatic. This gorgeous snowy, gothic landscape felt like a sister city to the main urban area of Bloodborne, further reinforcing the its influence on Dark Souls III. These places are all immensely unwelcoming, often disturbing, and consistently hostile.

This underscores how much Dark Souls III—and all of the franchise’s releases after Demon’s Souls for that matter—showcases influences from all the installments that came before it. The pervasive visual theme of death is as heavy in this game as it was in Bloodborne and the boss designs are as creative as anything found in the original Dark Souls. It’s remarkable that Dark Souls III manages to showcase these influences while still being able to stand out with an identity of its own. 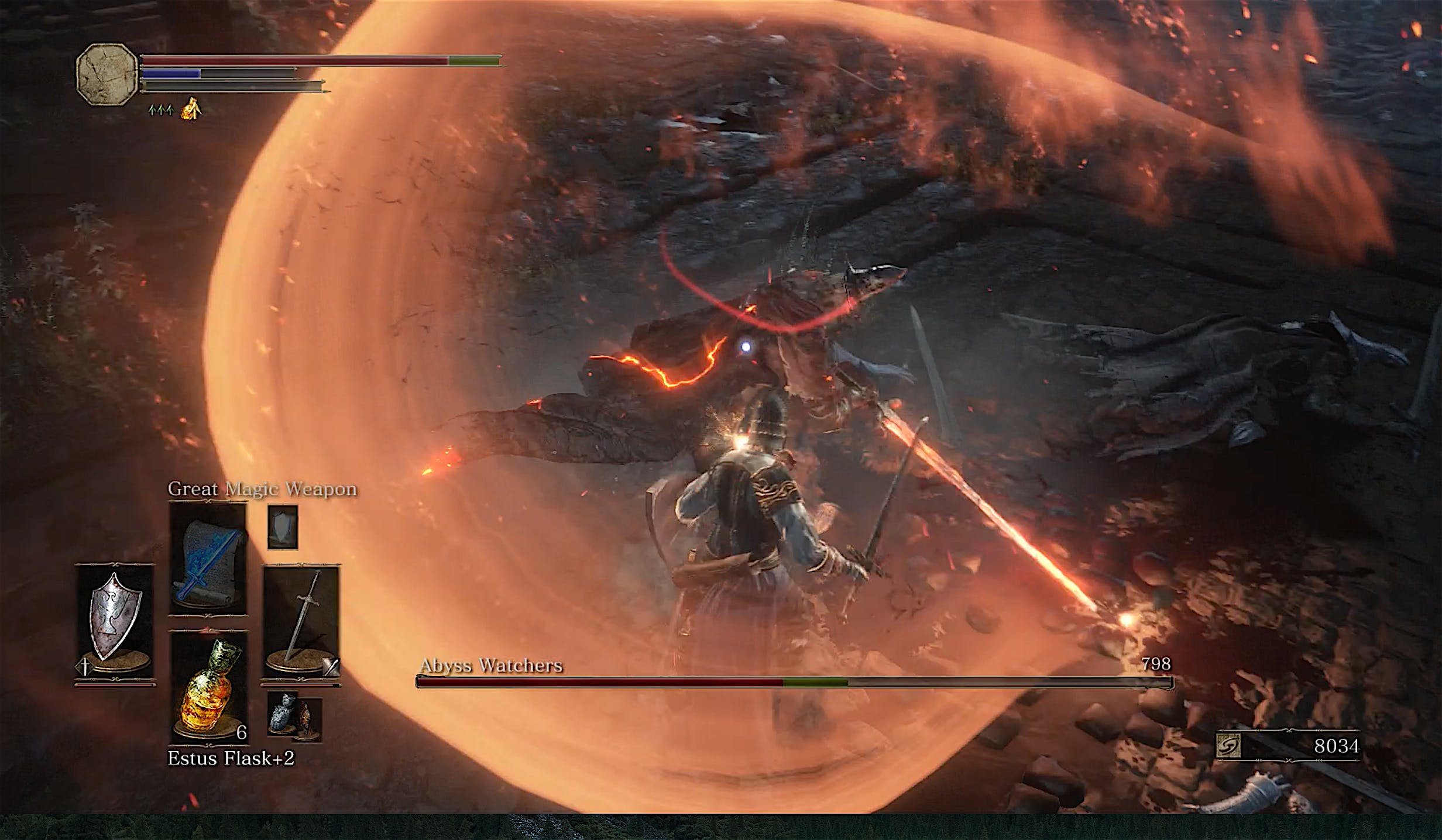 One of the beauties of this franchise is that the changes and tweaks implemented in its sequels seldom ever feel like improvements based on fan feedback from previous installments. Instead, it feels like From Software is merely experimenting, trying new things without prior criticisms being a driving design force. That’s a rare privilege for a studio to have. In the context of Dark Souls III, its surprisingly linear world will not impress most of its fans, but that’s a minor issue when everyone uses fast travel anyway. The combat also makes up for this—it’s the deepest fighting system in the series. Lastly, it maintains the series’ penchant for cryptic narrative, with an ending that is conclusive without officially declaring that this is the final Dark Souls. If this is the last one, as recent interviews have lead us to believe, it doesn’t go out with a bang, but rather with melancholic fanfare, which is certainly fitting for this landmark series.