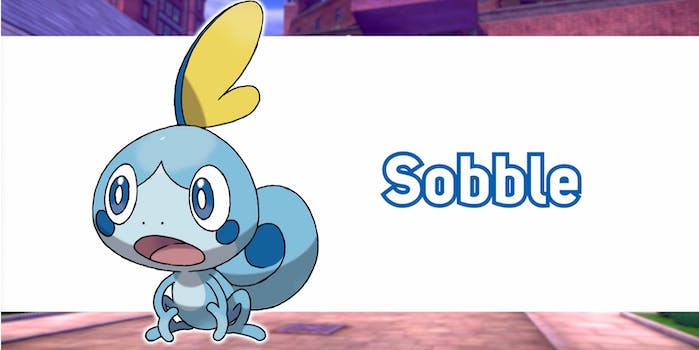 Pokémon Sword and Shield, the new core Pokémon games, have just been announced, and fans are already filled with joy for a new generation of monsters to catch. Most notably, Pokémon fans are finally getting that fully 3D home console Pokémon experience, plus a trio of delightfully cute starter Pokémon. Like anything cute and cuddly, the internet glommed onto Pokémon Sword and Shield like Jigglypuff to a sharpie.

First, there was the obvious comparison to one of our favorite Pokémon memes of yesteryear, “Surprised Pikachu.”

There were plenty of thoughts and aspirations for how Grookey, Sobble, and Scorbunny will evolve. Even though most starter Pokémon begin as adorable little snugglebugs, they more often than not evolve into total badasses by their third form.

Scorbunny and Sobble were clearly fan favorites (poor Grookey), and already people are warring over who is the cuter Pokémon.

cant wait for scorbunny to evolve into pic.twitter.com/KdpZE5qbYZ

Sobble is the Pokemon of the modern age. Pure anxiety about everything. pic.twitter.com/dpfICAPau0

Sobble during the NBA playoffs pic.twitter.com/Kl1mFb8Bnz

Since Pokémon Sword and Shield have a particularly European look to them, what with the Big Ben-looking clocktower and gentle countryside, it’s only fair that plenty of Brexit jokes were made. Hopefully, a Pokémon-based economy can stand on its own.

bold move by nintendo to make the new pokemon game take place in england during the brexit debate pic.twitter.com/82VFKCtSFh

I’m particularly in love with this one that will evoke plenty of nightmares.

wow they leaked the third game for pokemon sword and shield already?? pic.twitter.com/FK6Vfk4k5i

Pokémon Sword and Shield will be released in late 2019.