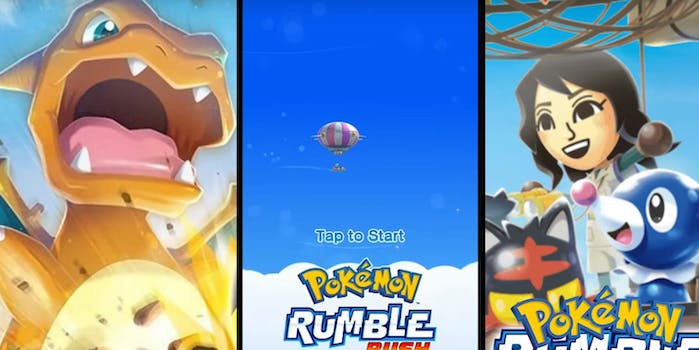 Pokémon Go is still dutifully marching along with Detective Pikachu tie-ins, but a new monster has appeared on the horizon in the bountiful land of Australia. Pokémon Rumble Rush, previously announced as Pokéland in 2017, appeared today on the Australian Google Play Store.

It’s not the first in the Rumble series, although it is the first on smartphones. Pokémon Rumble Rush lets you drop a Pokémon into the world and battle hordes of other pokémon by tapping toward them, and each pokémon seems to have a limited set of moves that encourage you to swap them out. Imagine a much more basic version of the Dynasty Warriors games.

Pokémon Rumble Rush: What you need to know

Here’s a peek at the first 10 minutes of Pokémon Rumble Rush from YouTuber TheBabyofCakes.

An information page, translated from Japanese, says the game will eventually be available on iOS and Android. It was also developed by Ambrella, the developer behind all the previous Rumble games.

It’s far from the only upcoming Pokémon mobile game coming out in the near future. The same Nintendo team behind Animal Crossing: Pocket Camp and Super Mario Run have their own Pokémon game in the works for this financial year.

You can check out our review of Pokémon Quest, which came out for both mobile and the Nintendo Switch. It really puts the “OK” in Pokémon.