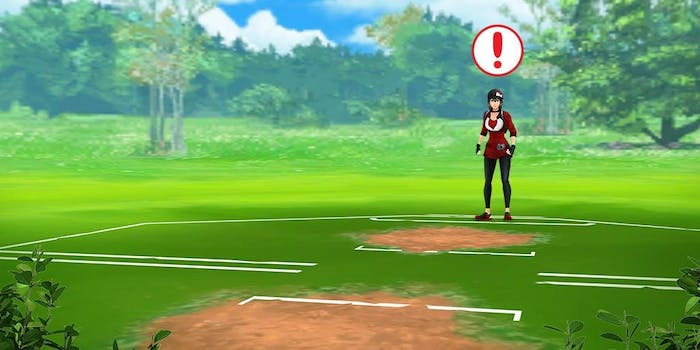 Pokémon Go just teased the addition of trainer battles to the wildly popular mobile game today, and players everywhere are losing their minds.

Players have been requesting the option ever since the game debuted two years ago.

This will effectively add the hotly-anticipated player versus player mode to Pokémon Go, so players can square off against each other with their own Pokémon squads, just like in the core series. It’s part of a set of more traditional mechanics that have consistently been on fans’ wishlists along with more nuanced Pokémon encounters.

The big reveal on the official Pokémon Go Twitter account came Friday as a series of tweets, hinting at something with one exclamation point, then multiple, then an image of a female Pokémon Go trainer presumably waiting for an opponent to approach. Finally, the full reveal came in a tweet stating that trainer battles would be coming “soon.”

Later in the afternoon, Niantic offered a bit more information on what players could look forward to with the battles. There will be three different leagues that you can participate in, named after different Poké Ball types: Great League, Ultra League, and Master League.

CP strength, which is typically determines which Pokémon will emerge victorious in battles, will no longer be the “only deciding factor” for trainer battles. Each league has a different maximum Pokémon CP limit, with Great League capped at 1,500 CP per Pokémon, Ultra League at 2,500 CP, and Master League removing the cap so that there’s no limit for those players.

While Pokémon with high CP might be a big advantage in Master League battles, Trainers will have to think more strategically when battling in the Great and Ultra Leagues, where there are specific CP limitations. pic.twitter.com/lRKc11Acbf

As the official Pokémon Go Twitter account points out, this means Pokémon with high CP might give players an advantage in Master League battles, but there will be more strategy involved when there are limitations placed on players in the other leagues. These decisions were made, according to Niantic, in a bid to create a system that feels “accessible” to a wide variety of trainers.

There’s more information to come, the Twitter account tells us, but one thing’s for sure right now: People are ready to get their trainer battles on.

It was worth it waiting 2 Years and 5 Months for this iconic moment, I'm beyond excited to finally have PvP coming to Pokémon GO!
The fact that it took almost 2.5 years is reason enough to assume it'll be more than just tap & swipe fest, but no expectations!

Remember: if you make eye contact, you HAVE to battle. Youngster Joey says so. That and shorts are cool and comfy.

It’s great news that the game is continuing to expand, and the player base is raring to go when it comes to testing their skills. Get ready for a whole new layer of Pokémon Go.