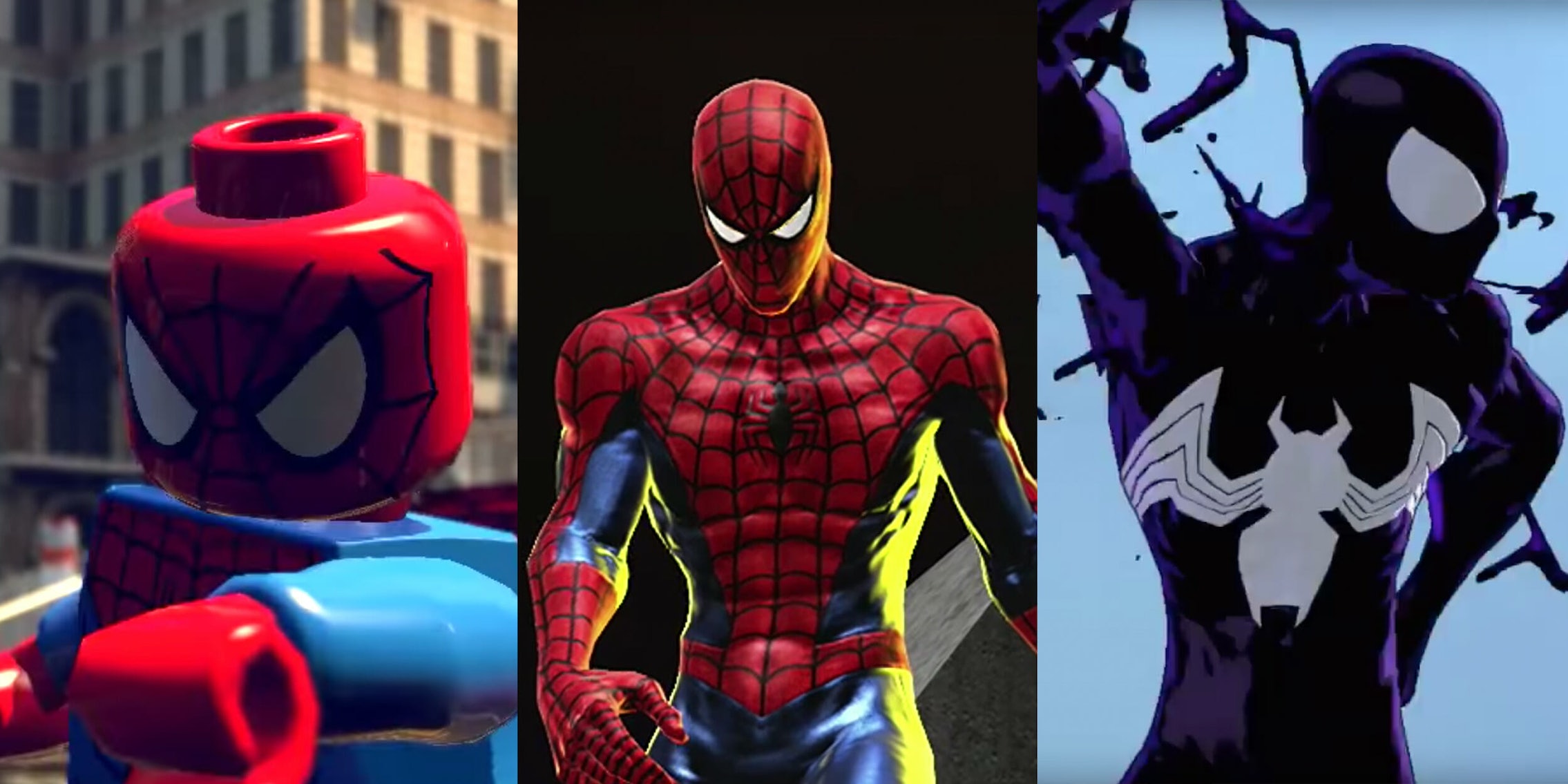 The 12 best Spider-Man games of all time, ranked

From the blockiest wall crawlers to the shiniest web slingers, these are the 10 major Spider-Man games ranked from worst to best.

When it comes to superhero games, Spider-Man has almost always reigned supreme. If it’s not the zany action that being a giant human spider affords you, or just the beauty of swinging from skyscraper to skyscraper as the Manhattan sunrise shimmers down Broadway, Spider-Man’s nature lends itself to open-world action games like few others can achieve, and game developers knew it, too. Before Insomniac’s new Spider-Man game releases this September, check out our list of 15 major Spiderman games ranked from worst to best.

The top Spider-Man games ranked from worst to best

Despite coming from the same studio that brought us the inventive and occasionally brilliant Shattered Dimensions, Edge of Time is an atrocious corridor crawler of an experience. After a complicated bit of time manipulation and Anti-Venom trickery kills off the Amazing Spider-Man, 2099’s Spider-Man brings him back to life and gets to work rewriting the threads of history. Unlike the beautiful variances of 2099 or Noir, environments and enemies are a homogenous glob, combat is punishingly repetitive, and you don’t even get to swing around on your webs all that much.

For a long time, Spider-Man and Venom: Maximum Carnage was basically the only good Spider-Man game around. Switching between both titular heroes, players moved eternally right, beating up street thugs and hunting the red-tinted Carnage in a classic beat-em-up arcade button masher. It was cool grabbing bad guys with Venom’s extending arms and whipping them back and forth, plus the comic book-style story beats were pretty good-looking, all things considered.

Basically a remake of the original Spider-Man for the Genesis, Kingpin features a relatively open level structure that was way ahead of its time. With added voice-acted and animated cutscenes and tons of gameplay improvements like increased climbing speed. Kingpin was easily the best 2D Spider-Man game until it was succeeded by a few Gameboy Advance titles.

This is a solid 2D platformer featuring an unusual rogue’s gallery, including Rhino, Hammerhead, Big Wheel (who is indeed a very big wheel) and the titular Mysterio. Gameplay demands that players be a bit smarter than usual, as gun-toting villains can easily make quick bug meat out of you. Plus, the levels are full of nooks and crannies to explore á la Metroid or Castlevania. The game’s graphics were (for the time) nothing short of astonishing. 3D villains are imposed over 2D backgrounds, giving them a unique and comic book-like vibe.

To its credit, The Amazing Spider-Man (based on the 2012 film reboot from Sony starring Andrew Garfield) is meant to take place after the film it’s based on. So, at least it’s telling an original story and not a beat-for-beat retelling. That said, the game offers way too many collectibles, repetitive side missions, and combat pulled from the Batman: Arkham games. Add in far roughter animation, and Amazing Spider-Man lands with a bit of a dull thud.

Developed by the same crew that gifted Tony Hawk’s Pro Skater to the world, Spider-Man set the precedent for many more recent 3D Spider-Man games. One notable sequence involves dodging a helicopter’s gunfire while climbing up a construction scaffolding, all while the heli’s reticle slowly centers in on you. It’s almost on par with something out of Metal Gear Solid. Because of the success of this game, we also managed to get Spidey in Tony Hawk’s Pro Skater 2. Thanks, Activision.

From the moments Bruce Campbell’s smarmy tutorial narration, Spider-Man: The Movie was something special. Even though we wouldn’t be traversing the streets of an open-world Manhattan until Spider-Man 2, the graphical upgrade of a new generation of hardware allowed us to see out into the distance as only the real Spider-Man could. Gameplay consisted of the great web swinging and beat-em-up action. Plus, it was just plain fun to see Peter Parker (Tobey Maguire alongside Willem Dafoe as the Green Goblin) donning his cheap suit prototype and learning the ropes.

Spider-Man Unlimited is a free runner (like Temple Run, in which your characters sprints and dodges obstacles for as long as possible), but it’s a genuinely good free runner absolutely brimming with lore and characters that only hardcore Spidey fans could appreciate. After it’s discovered that Green Goblin is trying to bring alternate dimension baddies into Spidey’s universe, S.H.I.E.L.D. assembles their own army of alternate universe Spider-Men (including Spider-Girl, Spider-Man 2099, and…Spider-Ham) to defeat the rogue’s gallery plaguing the city.

One of the warmest and most fun Lego titles, Lego Marvel Super Heroes captures the joy of swinging around New York City alongside more than a hundred of your best super friends. That this is a game that can be enjoyed by young kids just as much as adults means that we shouldn’t have any problem securing a new generation of Spidey fans.

Perhaps the most “out there” Spider-Man game, Shattered Dimensions stars Neil Patrick Harris (yes, good ol’ Barney) as Amazing Spider-Man, who’s joined by three other alternate universe Spider-Men (including Ultimate, 2099, and Noir Spider-Man) on a journey to restore the Tablet of Order and Chaos after a fight with Mysterio breaks it and sends the multiverse into, well, chaos. Alternating between four incredibly different universes, Shattered Dimensions often throws out what we thought Spider-Man gameplay was supposed to be and replaces it with something fresh, like 2099’s gliding, or Noir’s stealthy maneuvering. 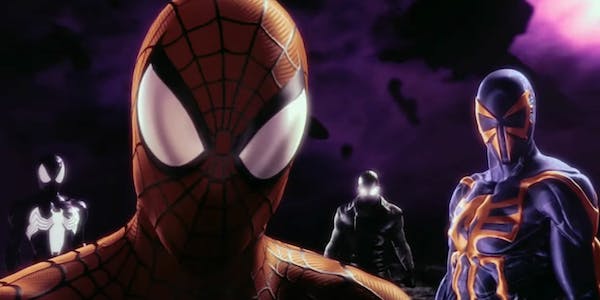 Building upon the open-world action of Spider-Man 2 from the previous year, Ultimate Spider-Man blended it all into a cel-shaded comic book visual style far more resembled the original comics. To boot, Ultimate Spider-Man’s narrative was written by none other than Brian Michael Bendis, the original writer behind the Ultimate comics line. Plus, you get to play as Venom and suck the life force out of random pedestrians. How quaint.

The first Spider-Man game to actually feature web-slinging that actually stuck to architecture around our hero, Spider-Man 2 set the bar for all subsequent Spider-Man games, as well as countless other open-world action hero games, like Prototype and Crackdown to name a few. The game was also the first to truly capture what it was like to leap and bound around a (relatively) faithful New York City, rather than just the rooftops. Until the Batman: Arkham games rolled around, Spider-Man 2 and its offspring reigned as kings of open-world superhero gaming. Still, though, I bet Batman never swung around an American flag pole for hours and hours.