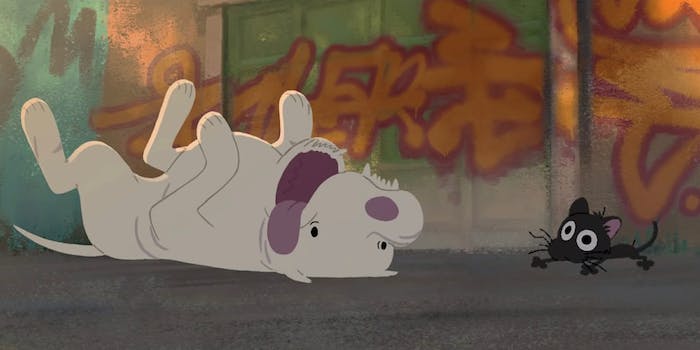 It'll tug at your heartstrings.

Pixar really knows how to pull at our heartstrings, and as its latest short film Kitbull demonstrates especially well, it only needs a few minutes to get us going.

Over the past few weeks, Pixar has released several experimental short films made by creators as part of its SparkShorts program. We got glimpses into a ball of yarn trying to find her place in the corporate world and two robots striving for freedom. Now with Kitbull, we now have a glimpse at the start of an unlikely friendship between a cat and a dog.

Written and directed by Rosana Sullivan and produced by Kathryn Hendrickson, Kitbull uses more traditional 2D-animation than we’re used to seeing from Pixar. The short follows a skittish stray kitten whose life is turned upside down when a friendly pit bull moves into the yard where it resides. The world’s cruelty, however, leads to levels mistrust from both of them.

Fortunately, this short film has a happy ending. But it delivers a few gut punches along the way.