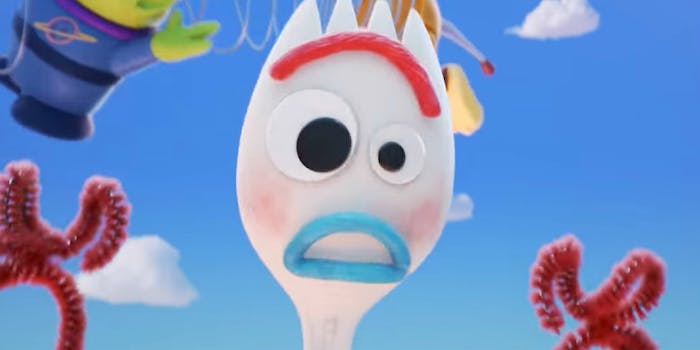 Pixar has somehow found a way to make a massively popular franchise about talking toys weirder. Yes, weirder than the toys coming to grips with their mortality before falling into a molten pit. The latest teaser trailer for Toy Story 4 shows off a new, anxiety-ridden character named “Forky,” who is clearly a spork.

Whatever path Toy Story 4’s plot takes (John Lasseter said three years ago that it was a love story between Woody and Bo Peep), it’s sure to be a little…different. Pixar debuted the new teaser trailer on Monday, and it starts off simple enough. Our favorite toys are dancing in a circle, set to Joni Mitchell’s “Both Sides Now,” until the spork shouts “I don’t belong here! I’m not a toy!”

According to Toy Story 4 director Josh Cooley, Forky is the product of Bonnie (the little girl from the end of Toy Story 3) taking a disposable spork and making a toy out of it. Whatever the origin is, you can bet Twitter is lit up with some hot takes.

First, there’s this excellent bit of wordplay for Fortnite fans.

Pixar: So what are kids into these days?
Researcher: Something called Fortnite?
Pixar: Fork knife? Like a spork? We can do that!
Researcher: No… but… pic.twitter.com/blVl5n3OLJ

Then things get scarier, what with the cosmic implications of creating life by simply attaching some googly eyes to anything.

it appears to be bonnie’s creation so does that mean any human can create a sentient toy just by giving it a face? what cosmic entity dictates what is and isn’t a face? how abstract can we get PIXAR!?

Toy Story 4 is about a spork named Forky having an existential crisis because a child carelessly granted him sentience by gluing googling eyes to him.

I didn't make any of that up. That's the plot, and I am HYPED. pic.twitter.com/jjwwiQ4yOP

Can't wait to be deeply disturbed as the spork realises his mortality, his gum legs harden, and the glue keeping his eyes attached wears off. He slowly breaks down part by part. A NEW FAMILY ADVENTURE FROM THE MAKERS OF CARS 2

Remember the spork from Wall-E? This is it now.

One has to wonder what Pixar was thinking, both in terms of storytelling and merchandising opportunities.

SHAREHOLDERS: great! What is it?

PIXAR: its name is Forky.

SHAREHOLDERS: …we’re gonna be so rich

"I didn't ask to me made", says the new Forky character in synopsis of #ToyStory4 . I wonder if it's some kind of meta commentary about the movie itself.

And just one more for the gamer crowd.

Calling it now: With Toy Story 4’s cast addition of a cheaply made spork with glued-on googly eyes and pipe cleaner hands, the Toy Story franchise will grapple with the existential dread of questioning your own existence (perfect for the franchise’s longtime core demographic: mid-20s to early 30-somethings), and Woody and Buzz will be forced to convince Forky that he is indeed a toy. Wait, isn’t that just the original Toy Story?

If you want to see something a little different, then make sure to check out this Toy Story 3 live action fan remake trailer from earlier this year.