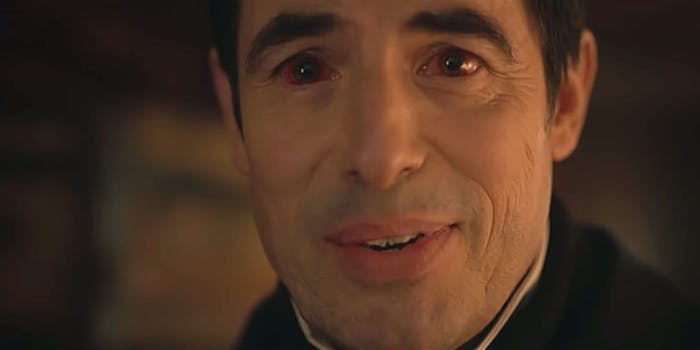 ‘Sherlock’ creators unveil the first trailer for ‘Dracula’ on Netflix

It's looks much scarier than you'd expect!

Are you ready for the return of Steven Moffat and Mark Gatiss, the creators behind Sherlock? Well, their TV adaptation of Dracula has been in the works for a while now, and the first trailer arrived today.

Airing on Netflix and the BBC, this three-episode drama retells the novel from Dracula’s perspective, plus some new material. Danish indie star Claes Bang stars in the lead role, looking like a surprisingly hunky version of Count Dracula.

Given the vast number of previous Dracula adaptations, it’s always interesting to see how new creators reimagine the story. The obvious assumption would be that Moffat and Gatiss would write a zany modern-day version like Sherlock, but that definitely isn’t the case. This teaser is straight-up horror, featuring gore, spooky castles, and a shot of a bug on an eyeball. It fits with Gatiss’ history as a lifelong horror movie fan, while still feeding into both creators’ interest in Victoriana.

Dracula’s supporting cast includes an intriguing list of British character actors including Sherlock alum Jonathan Aris and Misfits star Nathan Stewart-Jarrett, but their actual characters are yet to be named. Since the show reputedly covers more of Dracula’s backstory than just the events of the novel, that could explain why there are (thankfully) more women in the cast than you’d expect.

The BBC and Netflix haven’t announced a release date yet, but we know the show wrapped filming in August. Can we hope for a Christmas release?