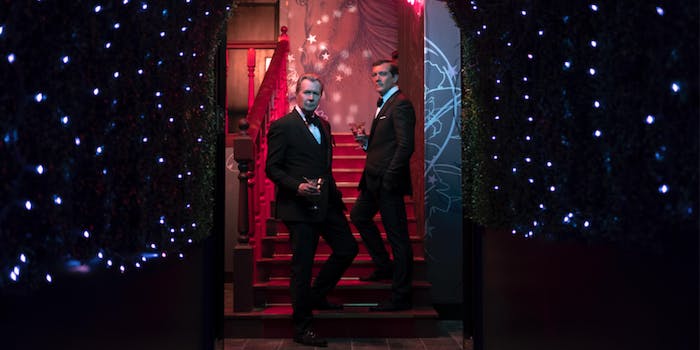 The lawyers behind Mossack Fonseca claim the film depicts them as 'ruthless.'

Netflix is being sued by the men behind Mossack Fonseca, the law firm at the center of Steven Soderbergh’s new Panama Papers film The Laundromat.

According to Deadline, Jürgen Mossack and Ramón Fonseca Mora filed a suit against Netflix on Tuesday, alleging defamation, false advertising, and trademark infringement. In the film, which explores the Panama City law firm’s role in the Panama Papers scandal, Gary Oldman plays Mossack and Antonio Banderas plays Fonseca, and the two traipse around in expensive suits, breaking the fourth wall to try to explain what happened; how a vast maze of shell companies and offshore tax havens helped the rich get even richer.

The suit alleges that The Laundromat “portrays the Plaintiffs as ruthless uncaring lawyers” and that the film and its trailer “cast them in the false light of criminality.” It also takes issue with the use of the Mossack Fonseca logo in several scenes. The suit states that because Mossack and Fonseca are still under FBI investigation, which could lead to a trial in the U.S., the film’s portrayal could affect a fair trial. Netflix has filed a motion to dismiss or “transfer venue to the United States District Court for the Central District of California.”

The massive 2015 leak of documents exposed multiple trails of secret money, many of them involving world leaders. Mossack Fonseca closed in 2018, citing “reputational deterioration” as the result of the leak. Four men involved with the firm were charged for their involvement with the tax scheme last December.

The Laundromat premieres Oct. 18 on Netflix.