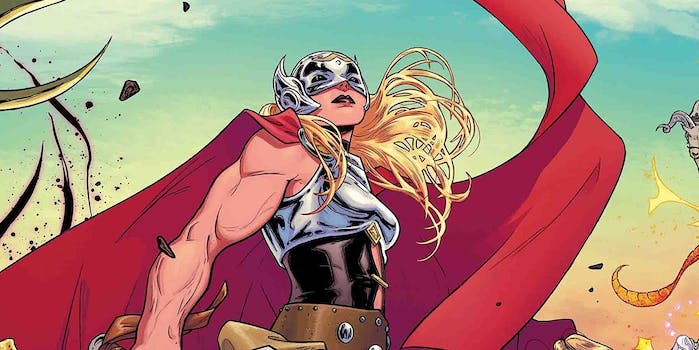 Let's get that name right before the film comes out.

Natalie Portman‘s return to the Thor franchise was a highly unexpected move, announced this weekend at San Diego Comic-Con. Everyone thought she was done with Marvel after the difficult creative process for Thor: The Dark World, but after one meeting with director Taika Waititi, she decided to come back… and this time she’s playing Thor.

The idea of Jane Foster becoming Thor began with a 2014 comic storyline by writer Jason Aaron and artist Russell Dauterman. Basically, “Thor” is a job title as well as a name, and when the original Thor loses the ability to wield Mjolnir, a woman takes over his role as a hero. Later in the series, she’s revealed to be Jane Foster. While this is happening, Thor 1.0 takes to calling himself Odinson, starring in a comic titled The Unworthy Thor. It’s one of several recent storylines that replaced the original white, male heroes with women or people of color, and the movies are already going in this direction by having Sam Wilson become the new Captain America.

This comic is a major inspiration behind Taika Waititi’s upcoming Thor: Love and Thunder, which takes place after Avengers: Endgame. Thor has already handed off his Asgardian leadership duties to Valkyrie (Tessa Thompson) and hasn’t fully recovered from his five-year bout of survivor’s guilt. In other words, it’s a perfect time for that “Jane Foster becomes Thor” storyline to begin.

And since we’re all going to be talking about this movie for a while, let’s make something clear: Portman’s Jane Foster isn’t “female Thor.” She’s Mighty Thor. Here it is, straight from the horse’s mouth on Twitter:

It’s tempting to differentiate between the two Thors by referring to the new one as “female Thor,” but ultimately it’s clumsy and more than a little sexist. Fortunately, she has an official title already, taken straight from Jane Foster’s Mighty Thor comics. If everyone starts using “Mighty Thor” now, we’ll all be used to it by the time the movie comes out in November 2021. And that way, we can do away with the awkward implication that Jane Foster is somehow a second-tier hero to the original Thor.