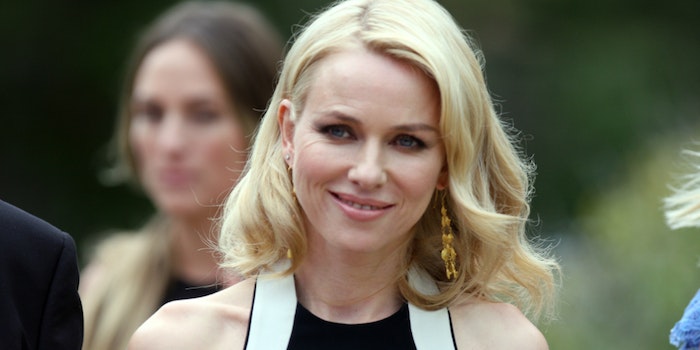 Who will she play?

Like Game of Thrones itself, the prequel series set around the Age of Heroes (which is tentatively called Bloodmoon) is shrouded in the deepest levels of secrecy. But that doesn’t mean fans aren’t already speculating on everything to do with it, as was evident when a set photo of Naomi Watts filming the pilot surfaced.

Bloodmoon is currently being filmed in Gaeta, Italy, and over the weekend, a photo of Watts with an elaborate blonde hairdo, plenty of jewelry, and a golden dress emerged on Instagram Stories before making its way online. The caption reads “Attrice protagonista beccata,” which translates to “Lead actress caught” from Italian.

#new 📸| Naomi Watts on the set of #GameOfThrones prequel "Bloodmoon"
(shared by kiaruzz91_ on Instagram) pic.twitter.com/jChfMQV5BM

As of right now, all we know about Watts’ character is that she’s “a charismatic socialite hiding a dark secret.” So far, the photo is our biggest insight into the character—even if our knowledge is still barebones.

The leap that Watts is portraying a Lannister is not a big one to make, although it’s almost certainly based on a superficial observation: She’s dressed extravagantly in gold—one of House Lannister’s colors—and is blonde. But there are a few things working against that notion. One: The Lannisters aren’t the only people in Westeros who have blonde hair (Brienne of Tarth, for example). Two: George R.R. Martin himself said that the Age of Heroes series takes place before House Lannister is even a legitimate player in the game.

“The Lannisters aren’t there yet, but Castlery Rock is certainly there; it’s like the Rock of Gibraltar,” Martin told Entertainment Weekly last week. “It’s actually occupied by the Casterlys—for whom it’s still named after in the time of Game of Thrones.”

To be sure, Bloodmoon could be one of those shows that is a little less linear with time. But chances are, Watts isn’t playing a Lannister, at least not directly.

The prevailing theory at the moment, given the little we know, is that Watts is portraying Lann the Clever, the founder of House Lannister who managed to swipe Casterly Rock from the Casterlys through sheer wit; House Casterly later went extinct.

But that comes with a twist: In Westerosi legend (and in books such as The World of Ice and Fire), Lann the Clever is a man. He reportedly “sired a hundred bold sons and a hundred lissome daughters, and his methods of taking Casterly Rock included tricking the Casterlys into thinking the castle had ghosts, setting lions or rodents loose, or getting a Casterly woman pregnant. (But the legend also said that Lann died at age 312, so we might want to take those with a grain of salt.)

If Lann was indeed a woman, there could be a number of factors why we don’t know that piece of information. It might’ve simply been lost to time, given that much of the Age of Heroes predates written word. House Lannister rewrote its own history to make Lann a man for sexist reasons. Lann could’ve played a key part of that deception and dressed the part.

If Watts isn’t portraying Lann, she could easily be playing a Casterly woman–someone in a key position to aid or stop Lann from enacting some kind of trickery on her house.

Whoever she’s playing, there’s at least one thing that’s clear from this one grainy and out-of-context set photo: Whoever her character is, she’s dressed to kill.