Review: ‘Luke Cage’ is brilliant in its first episode

'Luke Cage' builds on the strengths of 'Daredevil' and 'Jessica Jones' with a deep understanding of its setting.

This review contains minor spoilers for the pilot episode of Luke Cage.

A lot of superhero adaptations market themselves as “realistic,” shorthand that usually translates to adult-rated content or a darker, more serious tone. But in the end, you’re still telling a superhero story. Daredevil still goes head-to-head with magic ninjas, and David Tennant‘s Jessica Jones villain is a reboot of a character named Purple Man. That sense of “realism” is reliant on emotional authenticity and clever worldbuilding, and Luke Cage has both in spades.

Luke Cage has a superficially similar premise to Daredevil, swapping Hell’s Kitchen for Harlem and crime boss Wilson Fisk for nightclub owner/gangster Cornell “Cottonmouth” Stokes (Mahershala Ali). The similarities end there, though, because Luke Cage is uniquely grounded in its setting. While Daredevil‘s Hell’s Kitchen was indistinguishable from any other urban crime setting on TV, Luke Cage’s Harlem actually feels like someone’s home, populated by a wide cast of background characters and richly detailed references to African-American history and pop culture.

The first episode plunges straight into Harlem’s role in the story, beginning with Luke Cage’s home base, Pop’s Barber Shop. After having his bar blown up in Jessica Jones, Luke is trying to live a quiet life, being paid under the table for two jobs: cleaning the barber shop and washing dishes at Cottonmouth’s club. Pop (Frankie Faison) is a surrogate father figure to the entire neighborhood, and his shop acts as neutral space amid Harlem’s feuding gangs. Just as he encourages local kids to focus on basketball over petty crime, he’s keen for Luke to step up and start using his superpowers to help people. All Luke wants to do is keep his head down and make rent, but he inevitably becomes embroiled in a burgeoning war between Cottonmouth and a local arms dealer.

One unexpected but welcome aspect of Luke Cage is that it isn’t an action show, it’s more of a character-focused drama. The writers, led by Cheo Hodari Coker, clearly decided that Luke’s powers—bulletproof skin and super strength—are better used as a tool or a symbol than as the centerpiece for lengthy fight scenes. Mike Colter’s physical performance distances Luke Cage from other super-strong heroes, because he doesn’t bother with showy martial arts techniques. He just stands tall against a hail of bullets, moving with the quiet steadiness of a guy who knows exactly how dangerous he is, and wants to give people a chance to get out of the way. 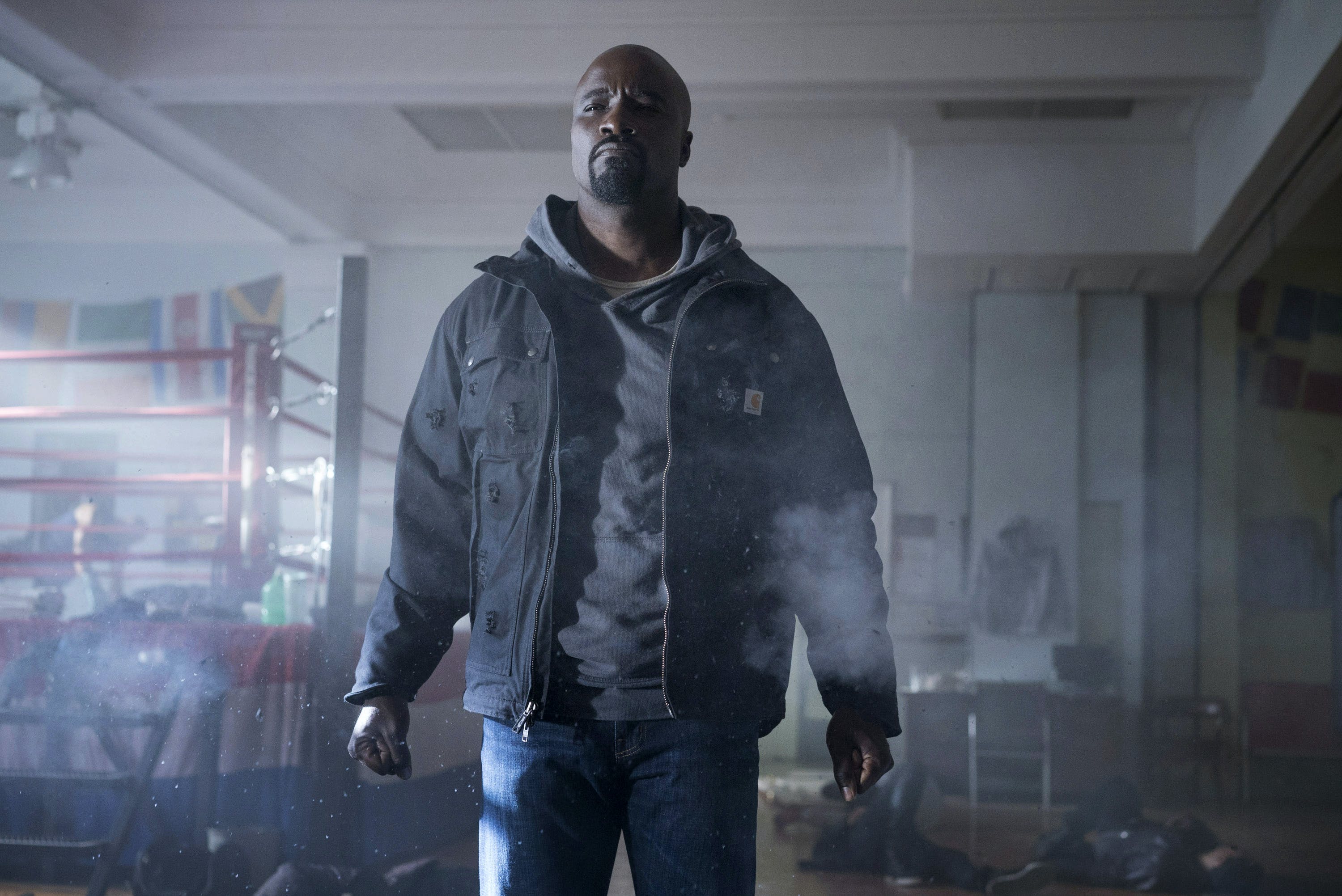 Mike Colter is perfectly cast, projecting a kind of self-awareness you rarely see among superhero characters. Working dead-end jobs and hiding his superpowers, Cage’s real strength in the first episode is his social skills, switching between showing different parts of himself to different people.

At Pop’s, he’s quietly amused by the macho banter and posturing between the barber shop patrons. At Cottonmouth’s club, he’s silent and closed-in, trying to avoid trouble. Flirting with detective Misty Knight (Simone Missick), he uses the kind of pickup lines you can only get away with if you have Mike Colter’s looks and Luke Cage’s self-confidence. (Luke knows exactly how hot he is.) And when he finally gets into a fight, he allows a sense of quiet menace to shine through. It’s a wonderful examination of the gap between a person’s public image and inner life, with Luke’s deepest thoughts and feelings only surfacing during private conversations with Pop.

The rest of the show’s cast is equally strong, especially the bad guys. Cottonmouth and his cousin, councilwoman Mariah Dillard (Alfre Woodard) continue Netflix’s winning streak for complex Marvel villains, a pair of powerfully compelling characters who offer a thoughtful remix of Daredevil and Fisk’s rivalry over Hell’s Kitchen. Pop, Cottonmouth, and Mariah are all deeply attached to Harlem, each representing different dreams for the neighborhood’s future. Pop just wants people to have good lives and stay out of trouble. Cottonmouth is ambitious and hungry for more power in the criminal underworld, fiercely proud of his success with the Harlem’s Paradise nightclub. And Mariah based her political career on a genuine and vocal pride in Harlem’s black heritage, while simultaneously being up to the neck in Cottonmouth’s dirty money. Luke Cage‘s scene setting is an antidote to the uniformity of the Marvel franchise, which typically restricts cultural references to things like Guardians of the Galaxy‘s fun but meaningless soundtrack. For good reason, Luke Cage‘s trailers and promotional interviews emphasized its predominantly black cast and writing team, and its carefully selected music.

Where Jessica Jones was an intensive single-issue drama about rape culture, Luke Cage is about black identity, from subtextual details like Luke’s hoodie and bulletproof skin, to specific conversations about sports heroes, political thinkers, and musicians. Luke reads Ralph Ellison’s Invisible Man; a local building is named after anti-slavery icon Crispus Attucks. Cottonmouth’s office is overlooked by a gigantic portrait of Biggie Smalls. Then there’s the soundtrack, the show’s main callback to the blaxploitation origins of the early Luke Cage comics.

Each episode is named after a Gang Starr track, with music by Adrian Younge (who scored the modern blaxploitation movie Black Dynamite, and Ghostface Killah’s “Twelve Reasons to Die” concept albums) and Ali Shaheed Muhammad (A Tribe Called Quest). Their orchestral score immediately sets Luke Cage apart from the forgettable atmospheric music of most crime shows, combined with a mixtape of guest appearances from artists including Jidenna and Raphael Saadiq performing live at Cottonmouth’s club.

Thanks to the expectation of binge-watching, Netflix pilots don’t face the same pressure as the exposition-heavy formula of a traditional TV pilot. Sometimes this translates to a lethargic prologue, but Luke Cage‘s first episode is the best of both worlds. While it barely dips a toe into the waters of the show’s season-wide arc, we get some of the strongest characterization and worldbuilding in the Marvel Cinematic Universe.