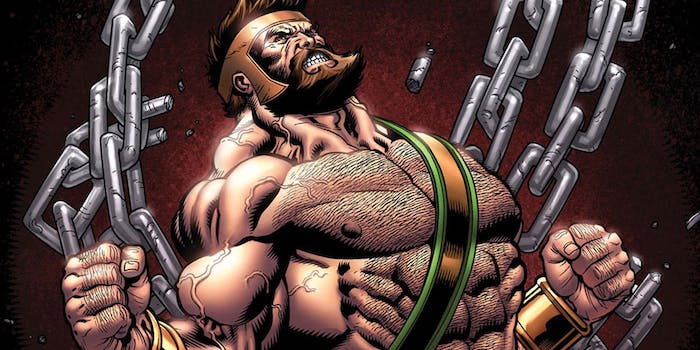 Controversy clouds excitement for Marvel’s ‘All New, All Different’ relaunch

Marvel's 'All New, All Different' relaunch is opening fans' eyes to the publisher's diversity problems.

For many fans, Marvel’s “All New, All Different” relaunch has already been soured by controversy.

The All New, All Different Marvel Comics universe will begin with a rollout of around 60 new titles starting in October. The plan is to revitalize old favorites while making the Marvel universe more accessible to new readers, including some comics aimed at Marvel movie and TV fans: Agents of S.H.I.E.L.D., The Vision, and three separate Guardians of the Galaxy titles.

However, this fresh start is already being criticized by some of Marvel’s most devoted readers on three separate points: 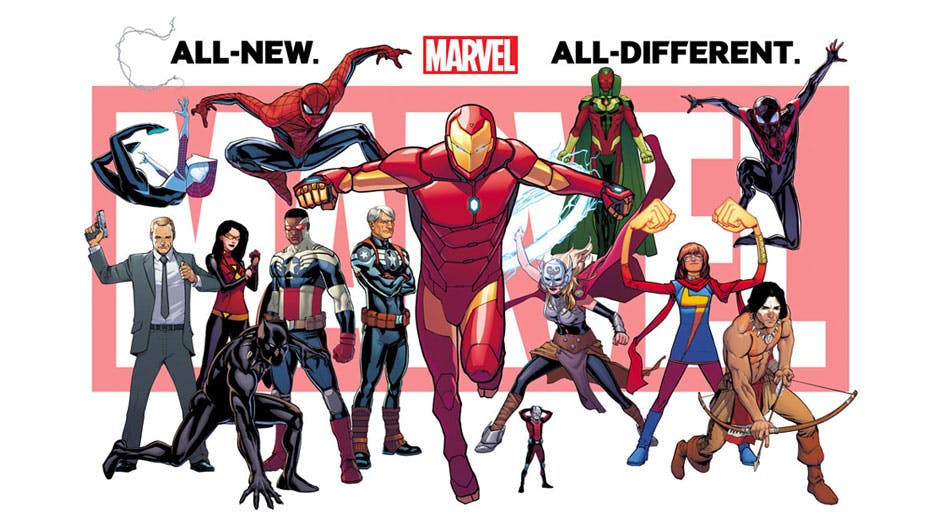 Marvel is failing to hire people of color

While at least 15 of the 45 ANAD titles announced so far feature characters of color, the creative teams are conspicuously lacking diversity—especially when it comes to writers.

This is at odds with Marvel’s public image, which in recent years championed characters like Miles Morales, Kamala Khan, and the new Captain America Sam Wilson. The discrepancy was highlighted by an upcoming run of hip-hop variant covers, which has inspired a lot of public criticism from readers including former DC Comics editor Joseph P. Illidge, who wrote in his regular Comic Book Resources column:

“The issue is that “hip-hop,” a culture and genre primarily created by Blacks and Latinos, is being profiled by a publisher that, to public knowledge as of this writing, does not have any announced notable Black writers on monthly, ongoing titles.”

Marvel Comics Editor-In-Chief Axel Alonso defended the variant covers in an interview with CBR, saying that Marvel’s “doors are open” to diverse creators, and that the covers were well-received in the hip-hop community.

…Some of the “conversation” in the comics internet community seems to have been ill-informed and far from constructive. A small but very loud contingent are high-fiving each other while making huge assumptions about our intentions, spreading misinformation about the diversity of the artists involved in this project and across our entire line, and handing out snapjudgments like they just learned the term “cultural appropriation” and are dying to put it in an essay. And the personal attacks — some implying or outright stating that I’m a racist. Hey, I’m a first-generation Mexican-American…[Laughs]

He added that “most of the announced artists are black.” That being said, some fans have pointed out that hiring an artist for a one-off variant cover is not the same as hiring him or her as part of the creative team on an ongoing comic.

In a follow-up interview on Friday, Alonso hinted that Marvel would hire more writers of color in future, saying, “We are experiencing a lull in African-American writers at this moment, but it is temporary.” When asked if the later ANAD titles would employ a more diverse range of creators, he said, “We have incredibly exciting stuff to announce in the next few months—titles, artists and writers—building to a crescendo for Black History Month.”

“I got my job writing in mainstream comic books because of Axel Alonso. He’s a guy who’s always been aggressive about hiring diverse voices in every sense of the word. So when people vilify that guy I’m like, “Wow…you’re picking on the wrong guy.”
Here’s a guy who’s absolutely an ally in terms of creating opportunity for people of color in comics. He’s constantly talking to us, not just about giving opportunities for me and Denys, but like “Hey, who else do you know? Who can you recommend?”…That is a real world thing about what we know first hand about who he is as a person and as an executive.”

There are still a couple of ANAD titles whose creative teams have not been announced, including Black Panther. But until Marvel publicly announces a plan to hire more diverse creators, the criticism is sure to continue.

Pause and consider this with me. Alonso is thrilled by stuff they are doing in Black History Month, 7 months away from now.

Regarding the number of women working on the first 45 ANAD books, Adam Sorice wrote on The Mary Sue, “While only writers and pencillers for the series have been announced… the initial solicitations listed 81 different male creators compared to just 8 women.”

Most of these women were either rehired for books they were already working on before, or they are taking over from other women. Only one (artist Sara Pichelli) is working on a comic with a male protagonist, although plenty of men have been put in charge of female-led titles.

Female characters fared better. They lead nine of the 45 titles, and more are present in team-up comics.

Marvel is ignoring its LGBT readers

This is especially noticeable when examined alongside the Marvel Cinematic Universe, which contains no queer characters despite being one of the most extensive movie/TV franchises of all time. While there are LGBTQ-friendly Marvel books, the overall impression across Marvel Comics and Marvel Studios is less promising. In fact, many fans feel that the current list of Marvel titles suggests an editorial disinterest in promoting stories about LGBTQ characters.

I no longer believe in Marvel as an LGBT-friendly publisher. My last shreds of confidence are gone. My heartfelt complements…

Intentional or not, this subtle erasure of LGBTQ characters is causing real hurt among readers who came to Marvel via queer-friendly titles like Young Avengers. 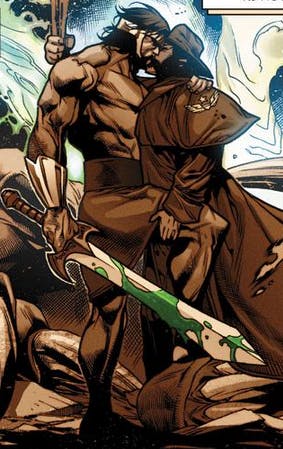 This issue came to a head last week with the announcement of a solo Hercules comic. Since Hercules is canonically attracted to men and is often illustrated in a blatantly homoerotic fashion, he seemed like an obvious option for a queer lead character. But Axel Alonso made it very clear that Hercules would be straight this time round.

“Hercules and James Howlett’s relationship in “X-Treme X-Men” took place in a unique alternate universe, similar to how Colossus was gay in the Ultimate Universe, but is straight in the [main Marvel universe]. Same goes for Hercules here.”

On Tuesday night, Marvel editor Tom Brevoort provided this explanation for the absence of queer characters in the ANAD relaunch:

“I need the story and the creative team to show up, and feel legitimate. I don’t just want to do it because somebody else has done it, and in doing so, do it badly.”

Brevoort regularly answers a lot of fan questions at once, so his replies are not always worded in the most PR-friendly way. That being said, you can’t really blame people for reacting negatively to this answer. Do LGBTQ characters really have to be examined for “legitimacy” before their stories can be told alongside straight characters? And so yet another flurry of angry subtweets began.

For the past two weeks, comics Twitter has been alive with debate about the ANAD relaunch. The controversy has spread from fandom-oriented sites like Comics Alliance (which recently published an article titled “Why I’m Boycotting Marvel Comics“) to mainstream outlets like the Guardian and The Hollywood Reporter, and shows no sign of stopping. More to the point, it’s causing real emotional upset among fans who feel betrayed by some of the responses from Marvel writers and editors.

The All New, All Different Marvel universe was meant to be a comic book relaunch like any other, but it may shape up to be a turning point for Marvel and its audience. Either Marvel changes how it’s addressing readers and their concerns, or it risks losing some of its most dedicated fans.