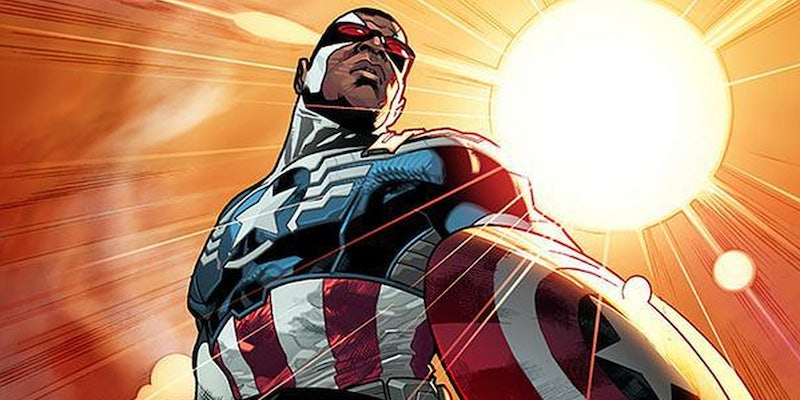 Marvel reveals that the new Captain America will be black

It's another surprise announcement from the comicbook makers.

When Marvel Comics revealed that they’d be making a big announcement on the Colbert Report, many fans guessed correctly what they’d be talking about: Captain America.

Colbert was the obvious choice for a Cap announcement. Stephen Colbert is a nerd, his onscreen persona is a parody of overblown patriotism, and he’s even had a replica Cap’s shield hanging on the wall of his studio since 2007. It’s a fitting choice, especially after Marvel recently used The View to make the announcement that Thor is now a woman.

Marvel’s big Colbert announcement was that Sam Wilson, a.k.a. the Falcon, would be taking up the mantle of Captain America.

Sam Wilson was Marvel’s first African American superhero, and has long been a major player in Captain America comics. He’ll be taking over in October’s issue #25 of the current Captain America, after Steve Rogers loses his supersoldier powers during a fight with a supervillain. Writer Rick Remender explained on Marvel.com that Steve Rogers would still remain a regular character in the series, providing “strategic support” for his replacement.

Announcing this news on the Colbert Report looks like another step in Marvel’s plan to get more people reading superhero comics. Their movies are enormously popular, but comics still tend to be more of a niche interest, so it’s interesting to see Marvel using talk shows to frame comicbook news as a normal part of mainstream pop culture.

It’s no coincidence that both of these announcements focus on the progressive nature of Marvel’s creative direction, which many fans are interpreting as a sly dig at DC Comics. In recent years the ongoing (and somewhat manufactured) rivalry between the two publishers has taken a more and more ideological slant, as DC lags behind Marvel when it comes to appealing to more diverse audiences.

A black Captain America and a female Thor. .@Marvel continues to school DC and use its current success to reshape biases. #win

Of course, while it’s definitely cool that Marvel are using shows like Colbert and the View to reach out to new audiences, the Thor and Captain America announcements are not quite as momentous as Marvel wants them to sound. Many other characters have used the Captain America alias in the past, including Bucky Barnes (who most people will know from the movies), and Isaiah Bradley, the first African American Captain America.

Comicbook continuity being what it is, the old Thor and Captain America will likely return to their old posts in a few years, or at least continue on in alternate timelines. But Marvel have still done a good job of making this news into a more mainstream discussion topic — not to mention stealing DC’s thunder in the days leading up to Comic Con.