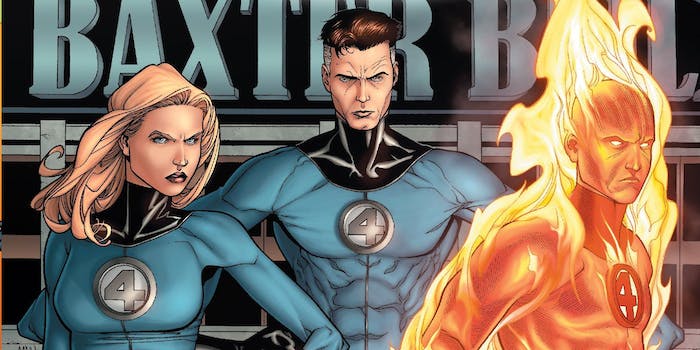 When Marvel began to phase out the Fantastic Four in 2014, many fans suspected the publisher had an ulterior motive. The iconic superhero team—often described as “Marvel’s first family”—weren’t part of the Marvel Cinematic Universe. Fox controls the film rights, and the resulting movies are famously disappointing.

This led to rumors that Marvel mothballed the Fantastic Four over film rights issues, either attempting to harm the 2015 reboot or trying to distance Marvel Comics from the Fox franchise. Back in 2014, editor Tom Brevoort described this mindset as “paranoid,” asking fans to consider the plausibility of such rumors. Would Marvel torpedo one of their most famous superhero teams, purely out of spite against a rival movie studio?

According to former Marvel writer Jonathan Hickman, the answer is yes.

“I think it’s pretty common knowledge at this point that Marvel isn’t publishing Fantastic Four because of their disagreement with Fox,” Hickman told Newsarama. He suggested that Marvel was motivated by the low quality of Fox’s films, adding, “I completely understand because, well, it isn’t like they’re not acting out of cause. Fox needs to do a better job there.”

He also disagreed with a more recent comment by Brevoort, who suggested the Fantastic Four were outdated and unable to attract a contemporary audience. Hickman argued that the ideas behind the Fantastic Four comics are still “timeless, universal concepts,” and the team is no less appealing than any other classic Marvel character.

“If you want someone to care about a book, write a story they care about,” he said.

Hickman is in a unique position to point this out. He’s not an obscure ex-employee; he’s a well-known writer who moved onto creating original comics after years of high-profile work at Marvel. His credits include several volumes of Fantastic Four along with other A-list comics like Avengers, and the epic 2015 crossover event . This makes things awkward for Marvel, whose editors have spent three years insisting the Fantastic Four vanished due to lack of interest, rather than some secret agenda against the movie franchise.

Fantastic Four team member Ben Grimm (The Thing) will return in one of Marvel’s upcoming “Legacy” titles, but if you miss the old family dynamic, you may want to try DC Comics instead. DC is launching a Fantastic Four copycat called The Terrifics, explicitly announced as an alternative to Marvel’s forgotten team.