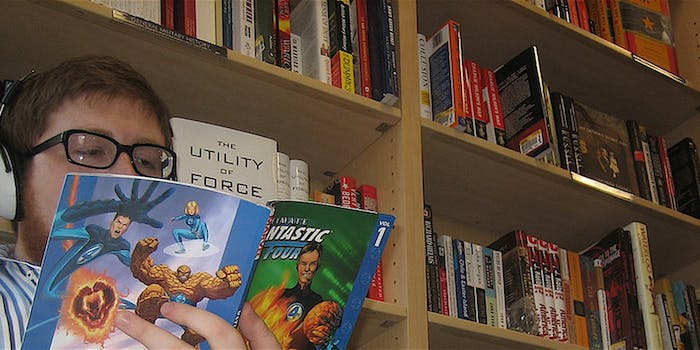 No, Marvel isn’t going to cancel the ‘Fantastic Four’ comics

Canceling a popular comic just to mess with Fox would probably be a bad idea.

Over the past couple of weeks, rumors have surfaced saying Marvel may cancel their long-running Fantastic Four comics. Why? Well, because the Fantastic Four reboot is owned by Fox rather than Marvel Studios, and Marvel wants to avoid promoting someone else’s movie.

If you’re into geek culture conspiracy theories, this Marvel/Fox feud sounds temptingly plausible. After all, this is the same industry that has Marvel Studios and Warner Bros. duking it out two years in advance to release Captain America 3 and Batman v. Superman on the same day.

With Marvel Studios now aiming to release at least two movies each year, they’ll be in direct competition not just with DC Comics adaptations, but with the X-Men, Spider-Man and Fantastic Four franchises from rival studios. As Den of Geek points out, Marvel stopped releasing X-Men movie toys, while toys for the Marvel Studios-owned Avengers movies are still widely publicized.

Marvel hasn’t officially responded to the FF cancellation rumors, but their senior vice president of publishing, Tom Brevoort, has commented on Tumblr.

“My denying rumors isn’t likely to keep anybody who’s prone to paranoia from panicking,” he wrote. “But really, does this even seem remotely plausible to people? Does it make any sense? Folks have a very strange idea as to the way a business is run.”

Basically, what these rumors fail to take into account is that more people will be interested in buying Fantastic Four comics once the new movie comes out, regardless of which studio is in charge. Plus, cancelling those comics beforehand is unlikely to make much of a dent in the box office profits of a movie that is aimed at a huge international audience.

So, cancelling Fantastic Four would not be a sound business decision for the publishing wing of Marvel Entertainment. However, this wouldn’t be the first time someone in the comics industry made an impractical publishing decision based on a petty rivalry, so we can’t completely rule out the possibility.