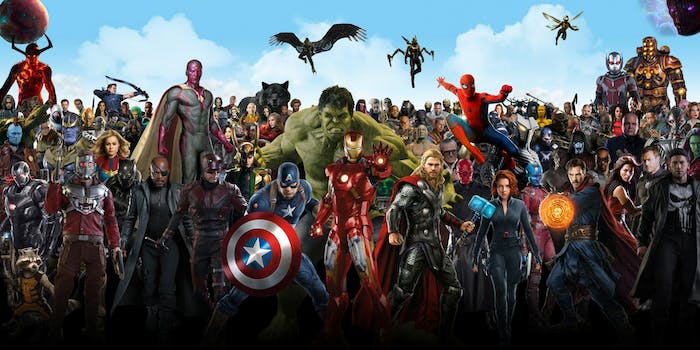 The MCU is dominating the box office.

On the heels of the highly-anticipated Avengers: Endgame premiere, a Reddit user has created a new visualization that reveals just how much money Marvel Cinematic Universe movies have made.

While the new Avengers film has yet to be released in the U.S., the movie is already expected to smash box office records. But just how popular are Marvel flicks? Are they more lucrative than franchises such as Star Wars and Harry Potter?

Reddit user rebellious_scum decided to answer those questions with a short video on the dataisbeatiful subreddit. The visualization begins with the release of 1999’s Star Wars: The Phantom Menace and tracks North American box office earnings for 20 years.

At first, Star Wars can be seen dominating other burgeoning franchises such as The Fast and the Furious before finally being overtaken in 2004 following the release of The Lord of the Rings: The Return of the King. Star Wars makes its way back to the top once again the following year with Revenge of the Sith.

When Iron Man became the first film to be released as part of the MCU in 2008, it barely registered compared to established franchises like Harry Potter.

It isn’t until 2012 that The Avengers finally put the franchise on the map, finding itself only below the Harry Potter series in earnings. But that all changed with the release of Guardians of the Galaxy, which thrust Marvel into the top spot in 2014.

Marvel has since held the title as the most lucrative franchise of the last two decades, releasing a slew of box office hits year after year for a total of $7.6 billion in earnings.

Now with Avengers: Endgame, the franchise is expected to add anywhere from $260 million to $300 million onto the pile. The film, set to premiere Friday, will also enjoy the widest release of any movie ever in U.S. history.