Get to know the bullet-proof man.

Since his debut in 1972, bulletproof hero Luke Cage has had a varied career in Marvel comics. Originally inspired by blaxploitation media, he later teamed up with Iron Fist (himself a product of the 1970s kung fu craze), and went on to become a recurring character in team comics like New Avengers.

In recent years, Luke Cage entered a new period of his life by getting married and having a child with Jessica Jones, a storyline that was partly mirrored by their romance subplot in Netflix‘s Jessica Jones. To get you ready for his own solo Netflix series, we’ve put together a list of highlights from Luke Cage’s extensive Marvel back catalog.

Launched toward the end of Stan Lee‘s editing heyday (Spider-Man, the Avengers and the Fantastic Four all began in the 1960s), Luke Cage’s early adventures are a true product of their era. Packed with eye-popping color and fist-shaking villains, Hero for Hire combines the simple action themes of 1970s superhero comics with a fresh kind of origin story: a hero who starts out in prison. 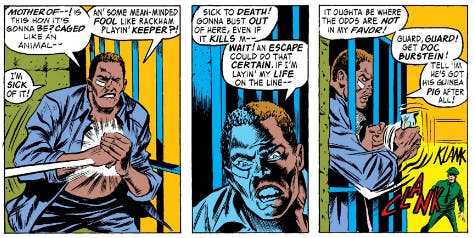 It’s always interesting to read the original introduction for a long-running superhero, and Hero for Hire #1 is no exception. Framed for drug possession by his ex-best friend, “Lucas” is sentenced to a long jail term. His only chance for parole is to volunteer for a medical experiment, which accidentally gives him unbreakable skin and superhuman strength.

Despite some rather dated dialogue, the first issue sets the tone for the political subtext of Luke Cage as a Black superhero. His enemies are sadistic prison guards and an unfair legal system, his superpowers originate from unethical medical experiments, and his bulletproof skin has obvious real-world connotations. There’s even a moment where a prison guard shoots Cage because he thinks he saw a gun, when Cage had actually just picked up a rock to defend himself. 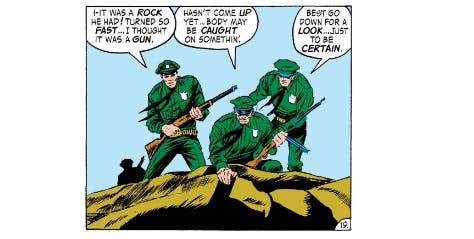 After using his new powers to escape, Lucas renames himself Luke Cage and offers himself up as a “hero for hire,” a pragmatic twist on superheroes like the Avengers, who are privately funded. The Hero For Hire comic becomes Power Man at issue #17, and he meets his future partner Iron Fist (Danny Rand) in issue #48. Cornell “Cottonmouth” Stokes, the main villain in Netflix’s Luke Cage, appears for the first time in issue #18, although he’s not really a major player in Luke Cage’s comic book backstory.

If you use Marvel Unlimited or a digital comics service like Comixology, it’s easy to find Power Man #48-49, the origin point for the long-running partnership between Luke Cage and Iron Fist. 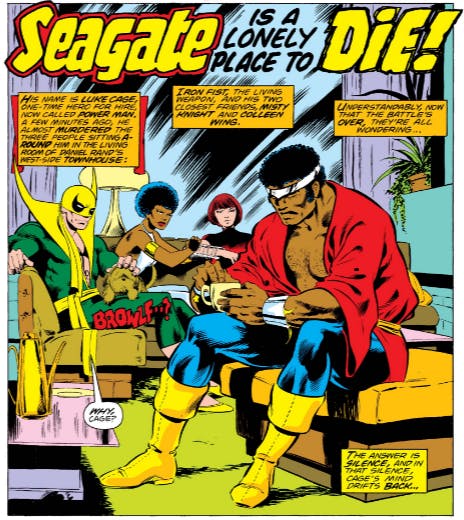 This brief storyline brings together two Marvel dream teams. X-Men icons Chris Claremont and John Byrne worked on this arc, introducing Luke Cage to Iron Fist, Misty Knight, and Colleen Wing. (Misty and Colleen, a cyborg detective and a martial arts master, previously appeared together in the now-obscure Deadly Hands of Kung Fu comic. They both have leading roles in the Netflix franchise.)

Power Man #48-49 is an ideal storyline if you want to read some vintage Luke Cage without tackling the entire series. In addition to giving a rapid introduction to several recurring characters in Cage’s life, it’s a textbook example of how his motivations differ from most Marvel heroes of the era. His problems are tied up in organized crime instead of super-powered villains like Thanos, and he’s weighed down by his desire to clear his name and live without fear of being sent back to prison.

Cage is exonerated in issue #50, at which point the comic became Power Man and Iron Fist until its cancellation in 1986. This long partnership puts Netflix’s Luke Cage in an unusual position because for many fans, Power Man and Iron Fist are a package deal. The two shows have separate creative teams and are likely to have very different tones, so it will be interesting to see how the Defenders miniseries reimagines this partnership.

Much like how Heroes for Hire reflects its roots in the 1970s, Cage is very, very ’90s. Each issue title sounds like the name of a straight-to-VHS action movie (“Bad Debts,” “Survival of the Baddest,” “Good Cop, Bad Cop,”) and the series begins with Cage fighting an assassin named Hardcore. Also, he now has a fade.

Cage‘s is an updated version of the street crime storylines of the 1970s comics, with Luke Cage introduced during a riot at a picket line in Chicago, his new home. But while Cage tried hard to be gritty, the setup for his new partnership is a little hard to swallow.

Keen to become Chicago’s equivalent of the Daily Bugle, a local newspaper hires Luke Cage to tackle a local crime lord… so they can cover the story. This was probably meant to illustrate the morally ambiguous tone of the series—a precursor to the darker content of the Marvel Knights comics in the late ’90s—but this breach of journalistic ethics seems kind of wild, considering its source: a Pulitzer prize winner, a veteran war reporter, and the newspaper’s lawyer.

This 20-issue series ranges from familiar urban crime storylines to some surprisingly trippy supernatural stuff in the later issues, and may be more of an acquired taste than the sillier but more sincere 1970s Power Man. It offers a more mercenary view of Luke Cage, emphasizing his desire for a timely paycheck over the moral core of his earlier storylines. This puts Luke Cage more in line with a character like the Punisher, although this series does flesh out a lot of his backstory.

Writer Brian Michael Bendis and artist Michael Gaydos created Jessica Jones for Alias, a noir-influenced detective comic from Marvel’s R-rated MAX imprint. You can check out our Jessica Jones guide for more information about the overall story arc, but for Luke Cage purposes, this comic is still a must-read. It’s a newly mature take on Cage’s personality, because compared to Jessica’s life of chaos and disaster, he really does have his shit together. 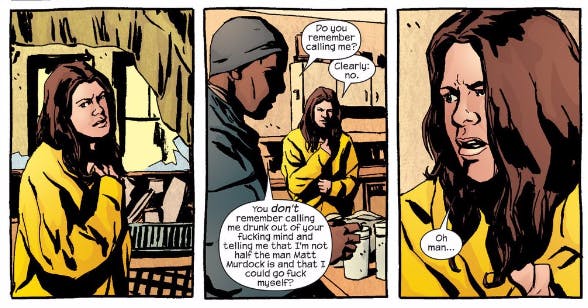 Luke and Jessica’s relationship isn’t exactly a classic romance on par with Clark Kent and Lois Lane, but that’s kind of the point. They start with a one night stand, neither of them is exactly pining after the other, and Jessica gets pregnant by mistake. They do get married after she has the baby, but that takes place after Alias and its follow-up comic, The Pulse.

There may have been an audience for an adult-rated gangster Luke Cage comic in 2002, but Brian Azzarello (100 Bullets) probably wasn’t the best choice to write it. Cage goes heavy on the sex and violence permitted in Marvel’s MAX comics, yet feels gratuitous compared to the critically acclaimed Alias.

Richard Corben’s art plays heavily on a kind of stereotypical gangster rap aesthetic, with a series of covers featuring gold grills, brass knuckles, and a naked woman with “CAGE” tattooed across her back. It’s like someone tried to mash up Get Rich Or Die Tryin’ with Hero for Hire, except the book’s creative team was a pair of middle-aged white guys, making it all feel kind of inauthentic and awkward.

The opening scene takes place inside a strip club, with Luke Cage wearing sunglasses (in the dark), a hat, an unbuttoned sleeveless shirt, headphones, and a gold “CAGE” chain—at which point he tries to avoid helping a grieving mother so he can keep watching the strippers. Someone really should have told this book’s creators to calm down.

After the early 2000s, Luke Cage mostly appears in team comics. From 2005 to 2010 he’s a member of the New Avengers team headed up by Steve Rogers, a period covering several major crossover events including Civil War. It’s very different from the street-level adventures of Luke Cage’s solo comics.

If you want to drop in for a few single issues, we recommend #22 (Luke and Jessica’s Civil War tie-in), #38 (a very strong Luke/Jessica story in the style of Alias), or the first New Avengers annual, which covers Luke and Jessica’s wedding.

In 2010, Luke becomes the leader of a new New Avengers team including Jessica Jones and Iron Fist. This series generally focuses on team storylines and flashy supervillains, but there’s a good three-issue miniseries from this period that goes back to Luke’s roots: New Avengers: Luke Cage. It’s a modern riff on the classic Hero for Hire stories of old, but if you want to see him as an Avengers-style superhero, he also had an interesting solo storyline in Thunderbolts around the same time. Thunderbolts #144-147 (collected as Thunderbolts: Luke Cage) can best be described as Suicide Squad: Marvel Edition, with Luke traveling to the floating Raft prison to recruit a team of supervillains for a dangerous mission.

Luke Cage’s latest superhero team comic was Mighty Avengers in 2013, featuring a seemingly random grab-bag of characters with Luke as the leader. It’s kind of a paint-by-the-numbers Avengers story, but with a hint of Heroes for Hire to make the characters seem more like underdogs than the New Avengers.

If you’re a fan of jazz-age slang, you’re in for a treat with this one. Loosely based on Luke Cage’s origin story, this graphic novel is part of the Marvel Noir continuity, beginning with Luke being released from jail into 1920s Harlem. Artist Shawn Martinbrough creates an appropriately moody look for Cage’s prohibition-era adventures.

The new Power Man and Iron Fist is awesome, with one caveat: It suffers from the same problem as most Luke Cage/Jessica Jones comics since Alias. While Jessica Jones was originally introduced as a screwed-up individual with a biting sense of humor and a short temper, motherhood inexplicably turned her into a generic mom character. Her main role in this comic is to stay home with the baby. 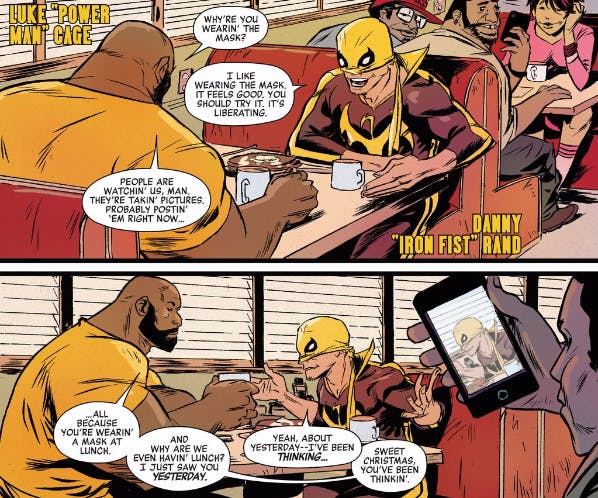 Jessica aside, this is one of the best Power Man/Iron Fist comics to date, featuring plenty of odd-couple banter between the two leads, and wonderfully energetic art from Sanford Greene. Unlike the muscular action comics that dominate much of Luke Cage’s history, Green’s art is more lighthearted and cartoonish, with an expressiveness and wide range of body types that feels reminiscent of the new Ms. Marvel. Writer David F. Walker revitalizes the Power Man/Iron Fist double act with Danny as the overly enthusiastic doofus and Luke as his long-suffering partner, trying to defuse situations that inevitably end in chaos. Conveniently for fans of Netflix’s Defenders, there’s never been a better time to get into these two characters.