Here's our guide to Marvel's 'Civil War' comics: what to read and what to avoid.

Civil War remains one of Marvel‘s most famous crossover events, and while Captain America: Civil War is a fairly loose adaptation, now is an ideal time to check out its comic book origins.

Published in 2006 and 2007, Civil War included dozens of ongoing comics and spinoffs across the Marvel universe. For this guide, we’ve tried to find a balance between sticking to the central miniseries and reading every single comic. (Which would be a terrible idea, by the way. Some of those spinoffs are really not good.)

Crossover events are structured like a camera panning around a single, epic scene, offering multiple angles on the same story. It’s the same kind of complex, longform storytelling that got people hooked on Game of Thrones. Civil War kicks off with eight different perspectives of the Stamford explosion, a disaster that leads to the introduction of the Superhero Registration Act. After that, every superhero must decide whether to register themselves with the government (like Iron Man), or keep their secret identity and become an outlaw (like Captain America).

There are a couple of different ways to tackle an event like Civil War, whose story unfolds through a sprawl of interconnected comics. Either you follow a selection of individual strands in chronological order (i.e., how it was published at the time), or you can start with the main Civil War volume first, and then go back to see what was happening in the surrounding subplots.

Several comics act as prequels to Civil War, the best being Amazing Spider-Man #529-531, and a one-off volume about the Illuminati, a secret organization of big-league “establishment” characters like Reed Richards, Iron Man, and Namor.

The three-issue Spider-Man arc sets up the personal impact of superhero registration on Peter Parker, also introducing Iron Man’s pivotal role in the story. This incarnation of Tony Stark is statesmanlike and manipulative, at first trying to sway the political tide away from superhero registration (and, obviously, failing.) He takes Peter under his wing, partly because he sees him as a protege, but also because unmasking Spider-Man would be a good PR move once he decides to support the Registration Act.

If you’re a Spider-Man fan, we’d also recommend reading straight through his solo Civil War series, written by J. Michael Straczynski of Babylon 5 and Sense8. (As a bonus, issue #537 includes a truly iconic moment in Captain America canon, his “Plant yourself like a tree beside the river of truth” speech.) 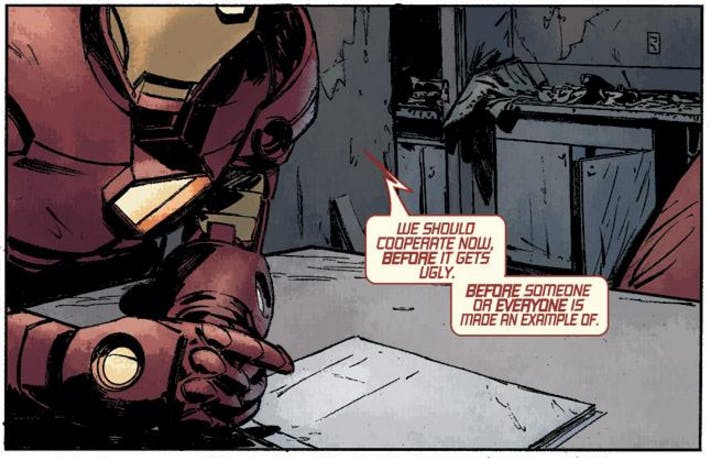 New Avengers: Illuminati isn’t essential to understand Civil War, but it’s one of the best comics—if not the best—in the entire event. Written by Brian Michael Bendis and drawn by Alex Maleev, it’s a great single-serving book about the foundation of the Illuminati, and their inevitable infighting over the moral question of superhero registration.

It goes without saying that if you want to read Civil War, you need to read Mark Millar and Steve McNiven’s seven-issue miniseries, which you can buy as a single volume. While some of the spinoffs are either unmemorable or feel like an awkward interruption of an ongoing comic, Civil War is a self-contained graphic novel in its own right.

Front Line is one of several tie-ins created for Civil War, following two journalists covering different angles of the registration debate. Since most of the other subplots focus on superheroes, this book offers a rare view into how regular civilians are handling the conflict. Some parts are a little clunky (for instance, issue #1 bizarrely compares registration to Japanese internment camps), but it’s a solid choice for readers who prefer the more realistic side of superhero comics.

During this point in Black Panther canon, King T’Challa of Wakanda is married to Ororo, AKA Storm of the X-Men. She and T’Challa visit the U.S. on a state visit, publicizing their opposition to superhero registration—which goes about as smoothly as you might imagine. Black Panther overlaps with Civil War for four issues, #22-25, providing an outsider perspective on America’s catastrophic superhero breakdown.

Despite Tony Stark’s central role in Civil War, you don’t really need to read his solo series. However, Captain America #22-24 is an excellent ensemble comic for fans of Agents of S.H.I.E.L.D. or the espionage-themed Winter Soldier arc, which was also written by Ed Brubaker. Co-starring Sharon Carter and Maria Hill, these three issues are easy to follow even if you’re unfamiliar with the backstory.

While the Civil War miniseries has a fairly neat conclusion, the event’s overall ending is kind of a mess. Some ongoing comics return to their characters’ solo storylines, while others meander on from Civil War at different speeds.

Our two picks for the epilogue are Captain America #25 and The Confession, which cover a hugely important event in the aftermath of the main story. On the offchance that you don’t know what this is, we won’t spoil it for you—but it influenced Marvel comics for years to come, and fans are still divided over how it played out.